'Fable: The Journey' is the closest we'll ever come to Peter Molyneux's 'Milo & Kate'

Share All sharing options for: 'Fable: The Journey' is the closest we'll ever come to Peter Molyneux's 'Milo & Kate'

We all know the story.

We watched it play out with the dazed interest of rubberneckers when Lionhead Studio's first attempt with Kinect publicly evaporated. The Milo Project, later known as Milo & Kate, was shown off in 2009 after the studio ruminated for years about how to create an AI that users could finally feel invested in. But 12 months later it would fizzle, with only demo trailers scattered through various video sites to confirm it once was the studio's most ambitious project to date.

This time last year Peter Molyneux came to Microsoft's E3 conference to announce Fable: The Journey. It was the studio's first step into Kinect territory since Milo and the result - Lionhead hoped - would be a similar marriage of high tech and emotion. But he came away unhappy with the result of the demo which presented the game as a dumbed down on-rails affair.

With The Journey we've moved out of the Fable franchise's character bloodline for the first time to introduce Gabriel, a traveler and nobody who's left to roam the landscape by horse, which he can either care for or bully. We're back in familiar Albion then, and all roads lead to hero-dom in one way or another. The on-rails elements are still prevalent as ever but despite the poor response last year, Fable: The journey has all the ambitions of Molyneux' Milo.

"What we've taken is a premise which is what Milo's all about: empathy and emotion," says creative director Gary Carr. "We've got empathic stuff that's called 'Audio Empathy' which comes from Milo. That basically takes rhythms of the voice, and the horse can twitch his ears and nod his head."

Manufacturing emotion is still one of the studio's main interests. Four years ago we were playing fetch with a dog companion near a coastline in Lionhead's fantasy England of Fable II. Now the studio's opted to go horse, believing a companion that can literally carry you will create a physical bond on top of the emotional one. But even with experience creating emotionally-charged AI, Lionhead is still perfecting the formula and they acknowledge their place in the ranks of entertainment media. They're not quite Hollywood yet, says studio co-founder Marc Webley, but they're working on it. 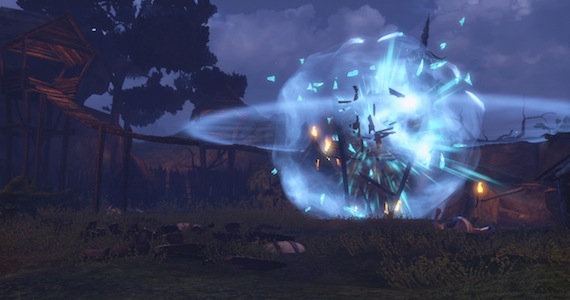 "Having someone cry in a game would be amazing," he says. "We want to play with people's emotions. But looking at other mediums, looking at Hollywood - they've got years and years of experience doing that. You can't really do that easily with a game because you're forced to ask yourself as a designer 'what's the player doing while this long cut scene is playing out?'"

'Having someone cry would be amazing'

Their answer is to bring linearity to the franchise's earlier open-world tendencies. The team decided The Journey would be a long-play title - It would feature a 10 hour-long linear-style campaign, with a potential 20 hours of replayability through an arcade mode, shooting gallery, and in-game collectibles. The game would offer a full Fable-style narrative too, with the team tackling the story of series stalwart Teresa who has remained a mystery since the first game in the franchise. Journey would be an exercise in supporting what Kinect has always done well -- physical interaction -- but it would also be an example of the studio using its privileged position under Microsoft's wing to push the technology further toward new narrative territory.

To compliment the long-play narrative, Lionhead used some of the "generic technology" from its earlier Kinect title. The skeletal tracking system that lets the device read the user's gestures was taken from Milo, says Carr, and so was the inclusion of seated gameplay. The Journey can be played sitting down, which is one of the recent advances for the device in the last year. Kinect's Forza Motorsport 4 and Gunslinger both included seated play but even that is old tech now, he says. 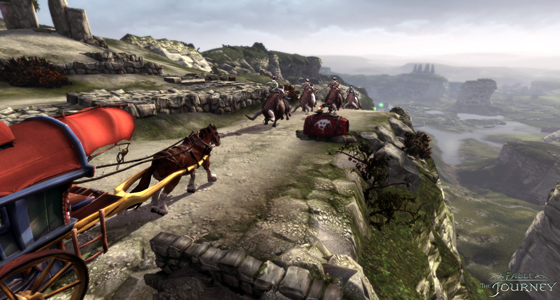 "With Forza you had to sit slightly on the edge of your seat. But they were a year ago, so we've got an extra year on that. In Journey you can slouch. It doesn't worry that you have your coffee table over there, you don't have to clear space. That was an important step change: people don't have to re-jig their living space. When you look at houses here in Guildford, England or in Japan where the living spaces are tiny, you need to offer the ability to sit down, which is a concept that came from Milo."

"I think that with Kinect there are going to be some step changes that will make the games come through," says an enthused Carr. "And one of those things is seated gameplay. Because I think a lot of developers were just waiting for that kind of technology. It's easier for us to develop it because we're first party, we've got Microsoft supporting us. It's not fair on third parties to write this kind of technology. It takes time and it's probably taken us the best part of two and a half years to write it. Now I think once this is released back to the industry, we'll just see lots of long-play games where you can sit down and play."

But it's difficult to build a story in an open-world RPG, he explains, because the player can veer off the narrative path. This time the studio would experiment with Fable from a different angle. Users would have a first-person perspective of the world to blur the line between where player ends and avatar begins. This would be your story as much as Gabriel's: when you punched your arm into the air, a bolt would fly out of his. When you waved your hand in front of a digital pond, the water would ripple with his hand. Compared to its sibling games, The Journey would be physically tied to you, more linear and despite offering a bigger world than the earlier Fable's, its vast expanses of citizens would be cut down to a number of "comedy characters." The result would be a streamlined Fable for story-lovers, and it would reduce the number of the series' expandable qualities.

"Like, the problem with Fable 1, 2, and 3 is we had this awesome simulation population but - and this is my personal feeling - you then just got married to a random person," says Lionhead designer Ted Timmins. "They had some random name like Bill but it didn't really quite mean anything. So in Fable: The Journey we wanted to actually create these characters that stand out, they have a personality, they have a name, they talk to you, and they know you."

It's a sharp change for the studio's main franchise. Not only did they decide against using their own game engine for the first time in the series, - Fable: The Journey runs in Unreal, which freed the team from having to debug an engine while designing a game simultaneously - studio co-founder Peter Molyneux left his role at Lionhead mid-way through the development of the game.

"It's interesting. You say to someone 'what's Lionhead?' and they say 'well that's Peter Molyneux' company,' says Webley.

However Molyneux retains an advisory role on the team, giving the developers feedback on Journey and other games. He works a short walk away from Lionhead - just three buildings up. He'll still probably come down and smoke there like he used to, says Carr, pointing to the ground outside his window.

Webley agrees, even with the changes the studio wasn't enormously impacted.

"I think in the future we won't be defined as an individual, we won't be me, we won't be Gary, we'll be defined by the games we make. A lot of studios don't have a big figure head and it leaves a big shadow on the company having such a big character forever. Going forward you can't replace somebody like Peter, but I think there will be a lot of opportunities for people to shine now. Behind Peter there were 150 people in the studio. We weren't all on Peter's shoulders."

Now the studio looks to the future. Fitting, then, that their first release in the new era of Lionhead is The Journey.