About 230,000 people have already toured The Smithsonian's Art of Video Games exhibition

There is a horse here. It stands nearly 11 feet tall and at first glance looks like it is made of cleverly placed pieces of Hawaiian driftwood. I imagine it coming to life on a beach, pieces of flotsam coalescing in the surge, pointed feet sinking into wet sand as an arched neck takes shape.

Over there, a woman sits at a Formica and steel tube table. There is a sundae in front of her, a spoon resting loosely between thick fingers. I notice the loose green socks bunched at ankles, her tousled hair, sloppy brown and orange dress, the gaping mouth. It makes me a little sad.

Down a marbled hall, there is a Pac-Man. Watching the canary yellow figure eat its way around the neon blue maze I remember a childhood of sweaty quarters and gameplay glimpsed over taller shoulders in the back of a 7-Eleven.

Running from March through September, The Art of Video Games exhibition at the museum understands that video games are art and spends its space and time tracing that art's evolution and influence.

The idea behind the exhibition came to life back in 2009 during a broad "Smithsonian 2.0" discussion about how to leverage technology to better communicate with new audiences, curator Chris Melissinos told Polygon via email.

Melissinos, at the time the chief evangelist and chief gaming officer for Sun Microsystems, was bought in with 19 other technologists to discuss ideas. His idea was to reach a younger, tech-savvy, gamer audience where they live: through video games.

The result is an exhibit that walks visitors through the history of an emerging art form by showcasing more than 80 video games and how they changed the technology and artistry of gaming. The museum also scheduled panels on the art, technology and influence of gaming throughout over the course of the exhibition's run.

The process of preparing the museum for the influx of gaming was an interesting one. The museum decided to use a public vote to narrow down a proposed 240 games to the final 80 used in the exhibit. Melissinos was also tasked with training the museum's docents, who he discovered were mostly women over the age of 50 who had never played video games.

"I had to explain to them the difference between how they viewed video games and how I did," he said.

Melissinos said he did that by leaning on his own childhood memories of learning to play and create video games and how that gave him a sense of control in his own young life.

"Within these games, we could be whatever we wanted: hero, villain, or somewhere in between," he told them. "Boundless and imbued with the human condition, video games stand as an exaggerated mirror of our humanity, society, and dreams."

He walked the docents through the exhibition and discussed things like the moral struggle that the player has with Shadow of the Colossus, the childlike wonderment of The Legend of Zelda, the boundaries of parental love in Heavy Rain.

"I had many of them come to me and say the they had never considered video games before, but they will never look at them the same way again."

"I had many of them come to me and say the they had never considered video games before, but they will never look at them the same way again," he said. "They were equally candid about saying that they thought video games were easy to dismiss, but now understand that video games are just as artistic as any other form of art."

That training, coupled with a powerful selection of video games and traces of interactivity spread throughout the exhibition, helped to spark an extraordinary reaction.

"To date, I believe that roughly 230,000 people have visited the exhibition since its opening just a month and a half ago," Melissinos said. "Most people have been able to find connection to games that meant something important to them, brought back memories from their past that they held dear, and found connection between multiple generations. Lots of hugging, laughter, amazement, and wonder has been on display by the visitors.

"I hoped that it would help unite generations that grew up playing video games, give a deeper understanding to the humanity embedded in so many of the games we play, and allow people to understand that video games may have been more than they considered when they first came to the exhibition. I think this has been, absolutely, achieved."

The exhibition will see continued life when it leaves the Smithsonian this fall, traveling to ten more museums through to the beginning of 2016. While it will never return to the Smithsonian, Melissinos said he hopes that video games will in other forms. 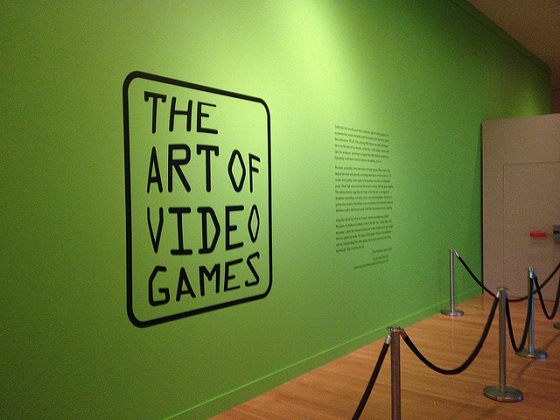 "I have so many other ideas about the cultural and artistic impact of a wide variety of video games that I would love the opportunity to continue to build a future exhibition," he said. "That remains to be seen, but this one is the first step towards that goal."

Does that mean that one day we will see video games not just in museums, but displayed side-by-side with other art?

Melissinos points out that even the most traditional forms of art, portraiture and sculpture, are often displayed in separate exhibitions. Besides, he added, does it really matter?

"The important thing is that we continue to observe video games as a form of art that will continue to evolve over time, become increasingly important in their impact on society, and remain accessible as a medium for individuals to deliver to the world a message that finds personal resonance through the interacting with the art," he said. Video games are "custom art experiences for the individual, organically achieved while retaining the authority of authorship. No other art form achieves this."

Good Game is an internationally syndicated weekly news and opinion column about the big stories of the week in the gaming industry and its bigger impact on things to come.Brian Crecente is a founding News Editor of Polygon.