Warface seems poised to fill a niche left largely unfilled by other titles in the space: cooperative play

In a sea of free-to-play first person shooters, Warface's secret weapon is co-op.

E3 reiterated that 2012 is the year of the free-to-play shooter, and Crytek Kiev's Warface is next on the blocks. After a successful launch in Russia last year and with a Chinese beta underway, Crytek's satellite studio in Kiev has its sights set on western markets next. While no official publishing arrangement has been announced, free-to-play purveyors Trion were taking appointments for Warface at this year's E3, after Crytek announced a publishing arrangement for the game in Taiwan and Korea with Nexon in 2011.

But a publisher isn't enough for a success in an increasingly crowded genre, especially with players like Tribes: Ascend and Blacklight: Retribution building up fanbases for months now. Luckily for Crytek Kiev, Warface seems poised to fill a niche left largely unfilled by other titles in the space: cooperative play.

While Warface has the standard deathmatch and team based modes one would expect, Crytek Kiev was surprised to find player preferences skewed towards Warface's nascent objective based co-op modes to the tune of around 60 percent of all player time. It seems that given the chance, the free-to-play audience is willing to play together, instead of against each other. 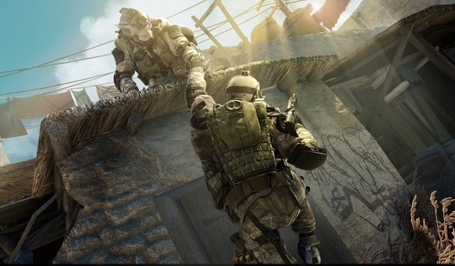 This might be motivated by the almost roguelike scenario generator in Warface. Levels are randomly created from a pool of geographic elements, and are then populated by MMO-like mobs – right down to boss level enemies that require teamwork to take down. Encounters are selected based on difficulty, with the easier options doable with just a couple of friends, but the hardest challenges will require a full squad, and a lot of patience.

The dynamic nature of level creation means that the experience will always be at least a little different, and the bits I played reminded me quite a bit of the Terrorist Hunt mode last seen in the Rainbow Six: Vegas games. This is a good thing.

The unlock system in place is also reminiscent of the loot-grind found in games like Diablo, with multiple tiers of weapons. The more "rare" the weapon, the more attachments it will support. Meanwhile before each match, you can select what kind of item type you'd like to be rewarded with should you successfully complete the match. Once the match is over, you can spend in-game credits (or a greater number of for-pay credits, where the monetization strategy comes in) to unlock the weapons you've been given access to.

It's hard to say just how well Warface plays – I was on Russian servers, after all, and some aggressive anti-cheating detection thought that I was killing too many things in comparison to my teammates, booting me from the game. At least, that's what the Creative Director from Crytek Kiev told me, anyway. Other than that, and accounting for the vagaries of trans-Pacific network latency, Warface played well enough, with a Cryengine-style take on class based shooting. Regardless of that, it'll be the co-op that sets Warface apart, and it will be the co-op that forces free-to-play fans to take notice when Trion and Crytek figure out exactly when Warface will launch in North America.