Last year's Skylanders: Spyro's Adventure – part video game, part collectible toy line and pure crack for kids – was a massive success for publisher Activision. The company has boasted that the multi-platform Skylanders is already the year's bestselling game worldwide, thanks in big part to sales of the action figures that electronically connect with the software.

This year, the company hopes to build something even bigger with the follow up, Skylanders Giants. New to the series are the titular giants, a new breed of Skylander that's bigger than the toys released thus far. They're also a bit pricier, running $15 – a $5 price bump from the standard Skylander.

The new giants revealed so far include the Life elemental character Tree Rex (pictured below), who fires green energy from his fists and can toss boulders that no normal Skylander could lift. Activision also showed off the Tech elemental Bouncer, a robot that rolls around on a single wheel and dispatches bad guys with finger guns and eye lasers. 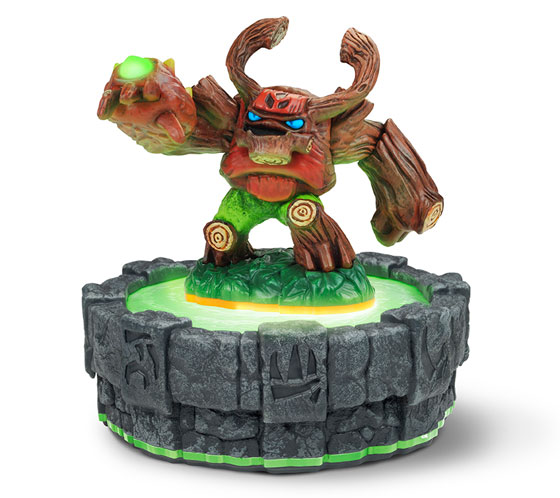 That glowing orb on the back of Tree Rex's hand will emit a bright glow when the toy comes within a few inches of the game's Portal of Power. No batteries or direct contact with the base unit are required; the signal from the Portal accessory will power the light force from within the game's new toys. It's precisely the kind of tech wizardry that will blow kids' minds.

"There will be lots of toys on shelves this year. We don't want to repeat last year's shortages."

The game's executive producer, Scott Krager, says the company plans to roll out those giants and light core Skylanders over time, promising Polygon that they won't run into the shortages parents faced last year.

On the actual video game side of the Skylanders Giants equation, the action-adventure looks on par with the previous game, with mildly violent combat, light RPG mechanics and simple puzzle solving that's appropriate for kids. (Krager says that developer Toys for Bob will be adding new difficulty levels in an effort to boost the game's replayability.)

Players will still need to use the right Skylanders characters, whether they be life, tech, undead or based on other elemental powers, to unlock areas of the game. Some areas and puzzles require a giant to be in play. So expect to snatch up another dozen or so fresh Skylanders alongside the game, should you find yourself obligated to purchase Giants for your son, daughter, niece or nephew.

Skylanders Giants will come to PlayStation 3, Xbox 360, Wii and Nintendo 3DS this October. A Wii U version is "being considered" but Activision has decided to forego a PC and Mac release for the sequel.