The latest on StarCraft II: Heart of the Swarm from Blizzard Entertainment.

A more apt analogy is that Blizzard is designing Chess 2, one could argue, since the StarCraft sequel ditched many of the Terran, Protoss and Zerg player pieces and replaced them with a new set of units with new abilities.

But Browder and the team at Blizzard Entertainment must contend with the eSports nature of StarCraft 2, carefully crafting new ways for three intergalactic races to battle each other in tournaments played by pros. Blizzard must also release promised expansions to StarCraft 2: Wings of Liberty, with an updated multiplayer mode that will introduce six new units – that's the current plan, anyway – and potentially reinvent "Basketball 2."

"We don't know that any of this stuff will work. And we reserve the right to take any of this back."

At the Major League Gaming Spring Championships in Anaheim, California this weekend, Blizzard showed off some of the major additions (and subtractions) coming to StarCraft 2's multiplayer mode with the Heart of the Swarm expansion pack. With the multiplayer beta test about two months out, it was a near-final look at the gameplay changes set to rock the fiercely competitive world of StarCraft 2 multiplayer.

Blizzard will add six new units in StarCraft 2: Heart of the Swarm, two for each race. Major and minor changes are coming to already existing units, like the Terran Reaper and Zerg Ultralisk. And one unit, the Protoss Carrier, is on the chopping block.

"This is all a work in progress," cautioned Heart of the Swarm lead designer Dustin Browder after detailing the list of unit changes in a media briefing. "We don't know that any of this stuff will work. And we reserve the right to take any of this back."

Perhaps the biggest (and most controversial) set of changes imminent for StarCraft 2 will come to the Protoss. Despite Browder saying that there were "no units for sure that we're removing," the Protoss Carrier seems like it will be removed from Heart of the Swarm multiplayer. 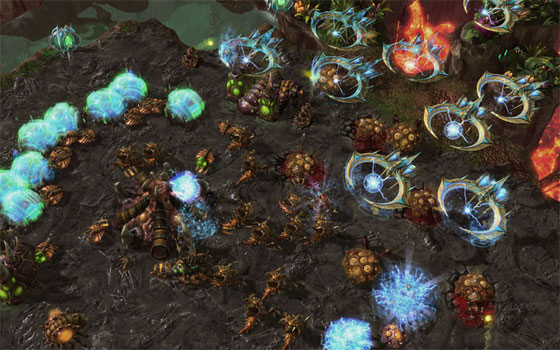 Likely filling the void left by the Protoss capital ship are two new air units, the Oracle and Tempest.

Browder described the Oracle as a "harassment specialist." It has an ability named "Entomb" that can slow an enemy's resource gathering efforts by placing a force field on top of enemy minerals, blocking workers from harvesting. Entomb allows the Protoss to pursue an economic edge – and seriously piss off opponents in the process.

The Oracle can also cast "Preordain," new spy tech that lets the Protoss peek into an enemy base by turning a building into a detector. And with "Cloak Field," the Oracle can make Protoss structures, air units and ground units invisible.

The Tempest is a heavy, expensive capital ship new to the Protoss fleet. Browder says the Tempest looks "dramatic" but packs low damage at a high cost. The Tempest's major benefit is its super long range: 22 units. That's twice that of a Terran Siege Tank.

Heart of the Swarm will also usher in changes to the huge Mothership. The aerial unit now begins its life as a Mothership Core, a hovering unit that remains attached to a Protoss Nexus, the Protoss' home base. A Mothership Core can cast "Mass Recall," a teleport spell that instantly transports a cluster of Protoss units back to base.

Mass Recall, Browder says, gives the Protoss an option to be more aggressive in their tactics, to send a rush of Zealots, for example, into an enemy base and quickly pull them out if things get hairy. The Mothership Core also packs an anti-rush measure with "Purify." The spell defends the area surrounding a Nexus with energy blasts, perfect for defending against a rush of low cost Zerglings or Marines.

Finally, Mothership Core can execute an "Energy Transfer," refilling the energy levels of units and structures. At least, that's the current implementation. Playing the Heart of the Swarm pre-beta at MLG Spring Championships this weekend, it was apparent that Energy Transfer could be exploited to refill the Nexus' own energy reserves, allowing the Protoss base unit to cast "Chrono Boost" on other structures repeatedly, speeding up research and production.

In a conversation with Browder afterward, he said that the team was considering limiting Energy Transfer from the Mothership Core to Protoss units only. 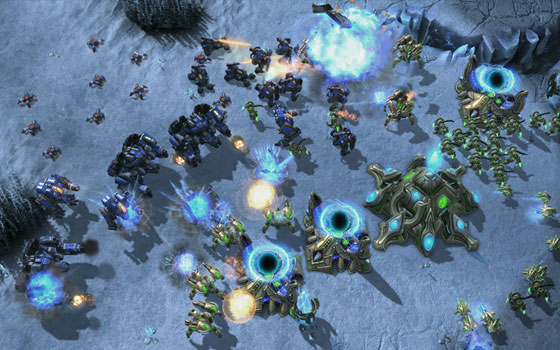 On the Terran side of the conflict, Heart of the Swarm will bring more Transformers-style tech to the already existing Hellion.

"Terrans are very vulnerable to mass Zealots," Browder explained when discussing the new Battle Hellion, a walking mech variation of the flame-throwing vehicle. "We think they should have a basic answer in case you run into 50 charging Zealots with an Archon back up."

The Battle Hellion makes the speedy Hellion a tough close combatant, Browder said, doing area effect flame damage when in "tough guy mode." It's a "really great splash unit," he explained, but the Hellion doesn't have the hit points to do much.

Joining the Battle Hellion are the Warhound and Widow Mine. The Warhound is an anti-mechanical unit built in the Terran Factory, a walking machine that auto-fires missiles at other mechanical units and boasts a primary cannon also designed to tear apart metal.

"This guy's obviously designed to break up Terran versus Terran mechanics," Browder said of the Warhound. It can "counter a Terran player that relies too much on Siege Tanks and a Factory option against the Protoss." It's also the unit Blizzard was thinking about replacing the massive Thor with at one point – as recently as last year's BlizzCon. But the current plan is for the Thor to stay and the Warhound to serve as its complement.

The Warhound is an anti-mechanical unit built in the Terran Factory, a walking machine that auto-fires missiles at other mechanical units and boasts a primary cannon also designed to tear apart metal.

The Terran's new Widow Mine will be a thorn in the side of StarCraft 2 players who suck at micromanagement. These burrowed explosives, which share some traits with the original StarCraft's Vulture spider mines, will lay in wait until a unit – either air or ground-based – draws near. It will then attach itself to said unit and, after a short fuse, explode. The Widow Mine burst causes big damage to its victims and a bit of splash hurt to whatever's nearby, so opposing players will need to push Widow Mined units away from the greater "ball of death."

Two existing Terran units will see some changes when Heart of the Swarm ships. The massive Battlecruiser, the Terran's late game super ship, will now have access to an afterburner boost, giving the lumbering aircraft some much needed speed. The low level Reaper, the Terran's cliff-jumping infantry unit, is also getting an upgrade: regenerative health. But it's also losing half of its offensive usefulness. Blizzard's ripping out the explosive charges that do big damage to enemy buildings.

While Terran players may bemoan the removal of the Reaper's secondary attack, StarCraft 2 production director Chris Sigaty tells Polygon that the update makes the unit "viable again." Sigaty says that without much micromanagement, the Reaper can take potshots at a foe, jump down a level or two, and recover. "It affects the early game for Protoss" in significant ways, Sigaty explains. 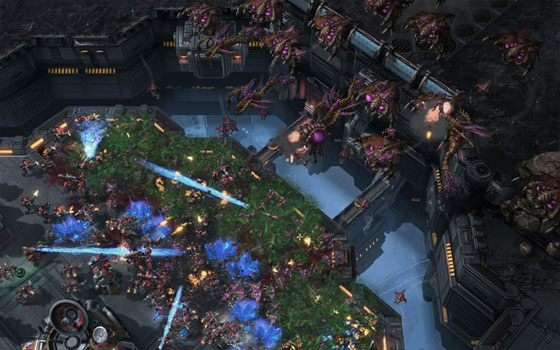 Finally, StarCraft 2: Heart of the Swarm will further evolve the Zerg, the race at the very heart of the expansion. The Hydralisk will get a speed upgrade at the Hive and the Ultralisk will get a fast assault "Burrow Charge" that lets the 300 ton terror duck underground then pop up elsewhere to attack.

The Hydralisk's speed boost may seem like a minor tweak, Browder said, "but it's had the biggest effect on gameplay of anything we've shown today." The Ultralisk change, Sigaty noted, was designed to address player frustration with having a massive tank that can be effectively blocked by a couple tiny units.

"They seem so awesome and so mighty," Browder said, "but then they get caught on one Marine or three Zerglings ... it's so sad."

Brand new to the Zerg brood are the Swarm Host and Viper. The former is a burrowing unit that spawns free, endless units called Locusts that spit acidic goo and live very short lives. Browder describes the Swarm Host as a "Zerg artillery unit that feels nothing like a Siege Tank."

The new Zerg Viper sounds as much of a harassment unit as the Protoss Oracle. The flying unit can unleash a "Blinding Cloud" that can cause a group of Marines or Hydralisks to see their range reduced to one measly unit. The Viper can also cast "Abduct," unfurling a long tentacle that snatches an enemy – even something as heavy as a Siege Tank – and yanks it into the thick of Zerg forces. So long, Siege Tank range advantage!

Those six units and the ensuing changes to existing ones will have a huge impact on the way StarCraft 2 multiplayer continues to evolve. The effect, Blizzard admits, it doesn't yet fully comprehend. It will require testing, testing and more testing.

"We have a bunch of guys in the office who are pretty great at the game," Browder said. "But its nothing compared to the first hour of beta. In the first hour, we get hundreds of thousand of hours of play all at once. So any of these things can change, even up the minute we ship."

After all, this is Basketball 2 we're talking about. It has to work right from the very first match.

"I think we're really pushing the limits of StarCraft 2 right now," added Sigaty, saying that Blizzard does not believe simply adding more units to StarCraft 2 makes it better. "There can be too much complexity. [StarCraft]'s magic is that it's a game that you can never really truly master. Even the absolute pros, they still aren't able to feel like they're in control of everything. I think we can alienate people if we go too far."

As for the single player side of Heart of the Swarm, Sigaty says the team is "putting the finishing touches on it and putting it through significant localization."

"We're a few months out there, but we're mostly done," he says. "There's still a reasonable amount of balance work."

We don't yet know when we'll see the final results of Blizzard's careful balancing act. The developer hasn't put a date yet on StarCraft 2: Heart of the Swarm, saying in its official FAQ "we will take as much time as is needed to ensure that Heart of the Swarm meets the expectations of our players, as well as our own high standards."

Bowser is getting his own massive $269.99 Lego set

E3 to return in 2023 with in-person event, with help from the company that runs PAX