Cyberpunk 2020 getting not just a video game, but a new tabletop game as well

Share All sharing options for: Cyberpunk 2020 getting not just a video game, but a new tabletop game as well

The decision to turn classic tabletop game Cyberpunk 2020 into a video game comes with a pleasant surprise: A brand new edition of the pen-and-paper game is in development. Speaking with Polygon during E3 last week, CD Project RED co-founder and current CEO Marcin Iwiński, said that the tabletop game is getting an update designed by Cyberpunk 2020 creator Mike Pondsmith.

The decision to turn classic tabletop game Cyberpunk 2020 into a video game comes with a pleasant surprise: A brand new edition of the pen-and-paper game is in development.

The update will be the first since the third iteration of the game, Cyberpunk V3, hit in 2005.

The goal, Iwiński said, is for Pondsmith to carefully update the game so it doesn't feel like a retro take on a cyberpunk future.

Pondsmith is already hard at work on the new ruleset, which will be used to flesh out the video game's storyline, with hopes of releasing the updated tabletop game when the video game hits.

During a nearly hour-long interview at E3, Iwiński talked a bit about how the developer and publisher evolved from distributor to successful game maker and then decided to make the leap from medieval fantasy to William Gibson-inspired cyberpunk.

The Witcher's author Andrzej Sapkowski is like Tolkien in Poland.

CD Projekt RED, makers of The Witcher and soon Cyberpunk 2020, was established in 2002. The studio was formed and funded by one of Europe's most successful video game distributors and localizers. The studio and its games are the realization of a life-long dream by two Polish teenagers who spent much of their high school years skipping class and playing games.

"We wanted to develop games, but we didn't have money," said co-founder and current CEO Marcin Iwiński.

Lacking the expertise and cash to develop games, the two decided instead to start a business distributing and localizing games in Poland as CD Projekt.

Unfortunately, their timing was terrible.

The duo started the company the same year that copyright law came to the country. To succeed, the company needed to convince people who had never purchased games — because copying them wasn't just accepted, it was legal — that they should now pay for new titles.

To succeed the company couldn't just bring the titles over and sell them, they needed to provide something a pirated copy couldn't.

"We were the first to localize," Iwiński said. "We added a lot of value to the product ... really giving a lot of value to the end consumer because ultimately, where we come from, our main competitors were always pirates. So we're not really competing against other companies but trying to convince gamers that trying to buy a game actually makes sense."

CD Projekt quickly made a name for itself by bringing fully translated version of popular games like Baldur's Gate first to Poland and then a broader European audience.

But they always wanted to return to their dream of making games. 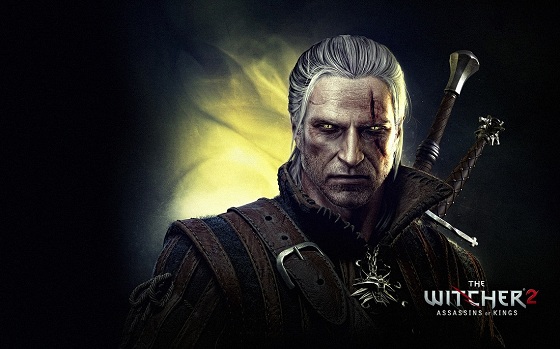 In 2002, the the company launched CD Projekt RED, their first development studio. The fledgling studio set its sights on turning a popular Polish fantasy book series into a video game.

"When we had enough funds, we started investing everything that the distribution company was making into development of The Witcher," Iwiński said.

While The Witcher series of books was wildly popular in Poland and parts of Europe, spawning not just a series of novels, but a "terrible" television series, it remained relatively unknown in the United States.

Iwiński said he and CD Projekt co-founder Michał Kiciński were both huge fans of the books when they were in high school. When they were ready to create a game, the first thing they thought of was The Witcher.

"The Witcher (and author Andrzej) Sapkowski in Poland is like Tolkien," Iwiński said. "I mean, he sold millions of books. The same in Russia. He's really, really huge."

Fortunately, CD Projekt decision to not just import games, but improve them for a local audience helped to establish their brand. So when the two went to Sapkowski and told him they were big fans of his work and wanted to turn them into games, he agreed.

The deal granted CD Projekt the rights and IP for gaming, for comic books and "some other stuff" for all Witcher stories, Iwiński said.

While The Witcher wasn't as well known outside of Europe, wrapping their game around the series' rich fiction allowed the developers to concentrate more on the play mechanics, look and design of the game.

"We think (The Witcher) is perfect for a game," he said. "It's very deep and it's a different take on games. There is no clear distinction between good and evil, and the game has consequences which aren't immediately visible in the game.

"Some people like it and some people don't, but it's something new and fresh."

Iwiński was delighted, but not completely surprised, when their first game, The Witcher, hit a worldwide market in 2007 with fairly good review scores and established a supportive fan base.

"We were developing it already with a worldwide reach in our mind," he said. "So we knew we could make a game that would be well-received definitely in Eastern Europe, Germany. They like more difficult games.

"I think our biggest fear was always the U.S. because gamers here are not as forgiving. They're used to a very high standard. I think the fact that the game sold really well in the U.S. was above our expectations. We were very happy ... we got over 100 awards. So it was definitely a huge breakthrough for us."

"You had pen-and-paper role-playing games, we had socialism."

On some level Cyberpunk 2020 and The Witcher are very similar. Both are properties built around a rich fantasy. Both have passionate fans. Both aren't widely known by a broader, more mainstream audience.

That's part of the reason why, when looking to start another new game series, the folks at CD Projekt RED went after a pen-and-paper game initially conceived in the late 80s.

"We wanted something proven," Iwiński said. "What we were fans of and a lot of people in our studio quite actually like are tabletop RPGs, and we started playing with this idea."

So the company got in touch with Cyberpunk 2020 creator Mike Pondsmith and told him what they wanted to do: To turn his creation, with no compromises in terms of the story, into something for everyone.

While The Witcher was a well-established brand in Poland, but not in the U.S., Cyberpunk is the opposite: A brand more known in the U.S. than in Poland.

"You had pen-and-paper role-playing games, we had socialism," Iwiński says. "We had sort of a gap in the whole entertainment thing, but that's why we are teaming up with Pondsmith. We love cyberpunk and it enables us to ... take all of the inspirations and choose the right stuff which we think will work for a game.

Better still, Iwiński tells me, Pondsmith, who is also a game designer, is helping them on their take on Cyberpunk 2020.

"That was not the case with (The Witcher's) Sapkowski," he said. "He's a writer. He doesn't know games, doesn't understand games."

While Iwiński declined to talk about the details of their upcoming Cyberpunk 2020 video game, he did say that they are working to make sure it is revamped to feel more like a modern take on cyberpunk than a retro game.

"The system is continuously evolving," he said, "and Mike is working on new stuff. So our goal is not to take his properties and (change them) but we are not looking at a retro feel for the game. We want to take his ideas and look at where they might go a little bit further into the future ... but not too far."

A key part of Pondsmith's involvement in the project is updating the pen-and-paper version of the game, so the video game team can work off that when helping the fiction make the leap from the table to the television, Iwiński said.

And CD Projekt has the rights to the pen-and-paper property now as well, so they're able to make sure it sticks around.

"We want to build something very strong in the gaming world," Iwiński said.

And that doesn't mean that CD Projekt RED is done with The Witcher. Iwiński said fantasy world of The Witcher is rich with potential.