Share All sharing options for: Arma 3 brings the realities of war to the sea with new underwater combat

Bohemia Interactive show off their upcoming tactical shooter ARMA 3 at this year's E3.

When creative director Jay Crowe explains the brainstorming process that led to the adding of underwater play to Arma 3 he says it's an extension of the philosophy behind the entire series. Bohemia Interactive, the Czech team that have been working on iterations of their army simulator-cum-tactical shooter series Arma since 2001's Operation Flashpoint: Cold War Crisis are seeking out a new way to make reality digital, and the philosophy that makes this possible is based on player freedom. Earlier installments in the series let its users run across miles of fictional islands or a post-Soviet state; now that would be expanded when Bohemia breaks down the boundary of the sea.

And they are doing this with a combination of SEAL Delivery Vehicles, fictional underwater rifles, enemy divers, and sunken ships.

ARMA 3 introduces SDVs that users will pilot, ascending or descending in the water before ejecting at random points near underwater areas of interest - a sunken ship or a collective of enemy swimmers. It's a change from what was first mentioned last year: Bohemia toyed with the idea of including a quest-based system which was later revised into a looser-fitting format. Now users will have vague objectives to meet without having to follow the structure of quests.

'We talked about including a quest-based system'

"We talked about including a quest-based system last year but a lot of the design ideas just kind of crystallized into a campaign that truly helps the player a lot more. So at the start of the campaign we give you objectives like 'go out and find this bridge,' or 'go and attack this base.' And then by the middle of the campaign it's more of a case of saying 'this is your high-level objective, you now know how to play the game and you have options to choose from so use them.'"

The team have also brought on board a fictional underwater weapon for these situations called an SDAR, a 6.65mm rifle based on a real-world weapon. Pull the trigger and a tracer will fly out surrounded by a puff of bubbles before reaching your target.

Military features like these grew through anecdotes that were offered up by members of the team, says Crowe, along with other military professionals who had firsthand knowledge of the features Bohemia hoped to digitize. Bohemia Interactive itself is a studio built up out of military enthusiasts, many who spent a career in the military before moving into game development. Their knack for realism has grown from that real-world experience, and Arma itself has managed to feed back into the military world by upgrading its engine to PhysX 3.0 which "will be used for serious military simulation," says Crowe. But it's their relationship with the military that fuels new ideas in the franchise. 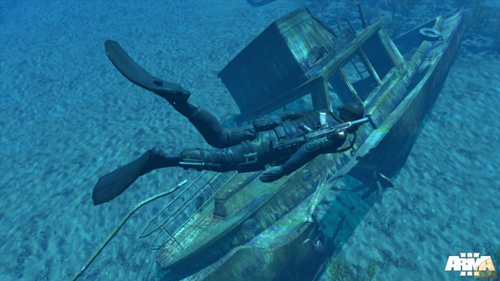 "When it comes to features like SCUBA diving we would say 'so what do I know about it? What do I not know? What do I need to find out?' We'd call in some guys who have military experience on the team who tell us what we need to add, the fact that we need a re-breather, all of that. So we add a re-breather which is more useful for military tactical work."

Their brainstorming sessions are limited by the reality of combat. This, Crowe explains, is why you won't see cover-based gameplay in the game.

"When you have such an enormous open world it wouldn't really make sense. In other games that are linear you can kind of expect that fire will be incoming from here, or from here. In Arma you can approach your objective from anywhere. You might be attacked from the front, from behind, so rolling to cover wouldn't be done that easily."

'We wanted to include more fluidity'

Instead they have introduced new animations that act as modifiers. In addition to the ability to lean, crouch, or go prone previously seen in Arma 2, users can now adjust each stance to pop their head or body out from areas, or alternatively turn over if prone.

"We wanted to include more fluidity, and obviously cover-based shooting is kind of fluid. I drop in, I jump out, I hit you. We can't do that kind of mechanic but what we can do is give the player some options about how we fight the enemy."

The player inventory is also seeing some improvement. A column to the left of the inventory shows what is available on the ground to pick up, while the remainder of the screen shows what is on your character. Previously these items, both on and off of your character, were combined in the menu of Arma 2. Additional information about the type of backpack and vest you have and their encumbrance level is also available.

Now set in the mid-2030s, Arma 3 will take place on the Aegean islands of Limnos and Stratis of Greece in the Mediterranean Sea, where the United States Army's 7th Infantry Division are attempting to hold off an Iranian offensive. Arma 3 is scheduled to release to PC in Q4 of this year.