'Thundercats' leans a bit too heavily on retro appeal

Share All sharing options for: 'Thundercats' leans a bit too heavily on retro appeal

"Thundercats DS" squanders its potential as the show's tie-in game.

Thundercats fans might be head-over-heels for the reboot of the 1980s cartoon series, but those who were hoping for a cool show tie-in game will, unfortunately, be disappointed.

Unless, of course, the appeal is all in the retro-ness. Thundercats for the DS - yes, the DS - is a side-scrolling action game that looks like a 90s Game Boy title. The game has been rendered to look old - a nod to the age of the series. Instead, what I assume should have been charming gave an air of being uncomfortably out of date. I wasn't, after all, playing a Game Boy game port. I was playing a game made in 2012 for a 2004 handheld meant to look similar to Disney's 1993 Aladdin game, but with one fourth the content and even less of the fun.

The game follows the first six episodes of the rebooted show, beginning with the Lizard army's invasion of Thundera. This is where my demo began. Lion-O, armed with the Sword of Omens, had to fight his way through lizard-men to find his sister and father. There were three types of these lizard-men to face off against - lizards with swords, lizards with bows and arrows, and bigger lizards with bigger swords. Fighting mechanics are simple - players use the face buttons to hack and slash their way through enemies with a very limited set of moves. Lion-O can jump between platforms - basically just up and down - to engage with enemies out of reach. 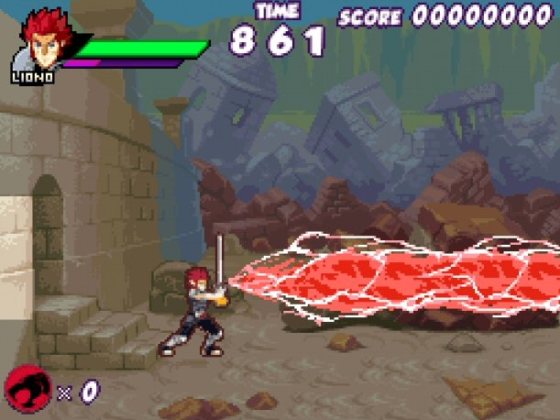 Upon defeat enemies drop two types of power-ups, those that restore health and those that charge the Sword of Omens. Once the Sword is charged Lion-O can shoot a red beam of light that will knock out a significant portion of his enemies' health.

The level lasted for about five minutes, after which Tygra joined my party. The bottom DS screen is divided into sections that display what characters are at your disposal. When a character joins your party, tapping the screen can momentarily summon them to aid you in battle. An online or even A.I. co-op mode would have been a nice touch here, as treating other series beloveds like Lion-O's summons is a pretty lame fate. Players also don't have the option to switch between characters - only Lion-O is playable.

It looks and acts as a budget game, which it may be smart to end up as. A PR representative told me that Thundercats was published on the DS because the "current economic climate" is such that most children probably already own a DS, and that most parents will likely not want to shell out for a 3DS just for a Thundercats game.

While younger kids will certainly get a kick out of playing as Lion-O, anyone with an eye for more involved games who isn't a die-hard Thundercats fan may want to pass. I understand the appealing of a retro-style game, but Thundercats looks lazy, especially when in the same booth shows like One Piece and Dragon Ball Z had games that were able to happily marry series' aesthetics with current technology. It's a simple beat-'em-up, but it's too simple. The rebooted show is pretty great, but it looks like the tie-in game has been given the backwards treatment.