'Skylanders Giants' may include unlockable Legendary or Nightmare difficulty

Share All sharing options for: 'Skylanders Giants' may include unlockable Legendary or Nightmare difficulty

Skylanders Giants may include an unlockable "nightmare mode" for players up to the challenge.

In addition to the Easy, Normal and Hard standard difficulty modes, a spokesperson at the presentation said "a nightmare mode or legendary mode will be unlocked if you finish [the game]." The spokesperson clarified that they weren't sure if the additional, more punishing difficulty level "has been finalized yet."

Giants once again grants players Portal Master powers in a quest to save the Skylanders' world, this time adding eight new Skylander figures twice as large and powerful as previous creatures. Skylanders are magical beings that protect a series of mystical otherworlds, all of which have been taken over by an evil entity named Kaos. In order to save these worlds the player must harness the powers of over 30 Skylanders across eight elemental types: Earth, Air, Water, Fire, Life, Undead, Tech, and Magic.

Unlike Pokemon, a franchise that continues to expand its taxonomy and geography as it evolves, Skylanders Giants works with what the series has already established, building upwards rather than outwards. The new giants introduced in the sequel are ancient reanimated Skylanders rather than entirely new breeds, their power elements falling into the same basic categories as those from Spyro's Adventure. 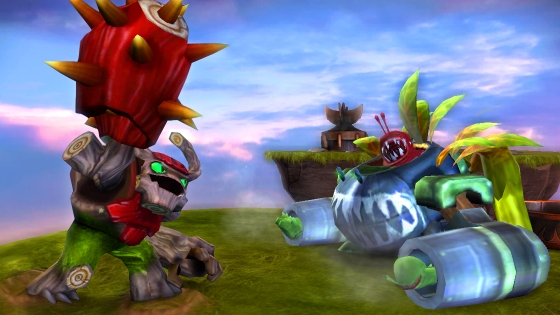 Activision and Toys for Bob have been careful not to alienate those who already own a Portal of Power and Spyro's Adventure sets, allowing backwards-compatibility with previous series' figures for Giants. The company has also promised special characters as select retail exclusives, as well as "treasure hunts" similar to those held for Series 1 Skylanders. These treasure hunts have previously involved shipping a small handful of gold or silver-colored creatures in character packs, with a few lucky buyers adding the unique Skylanders to their collection.

Players new to the franchise will be able to purchase a $74.99 game bundle including Giants, a Portal of Power, and three Series 2 Skylanders figures: a vacuum-powered eagle named Jet-Vac, the undead dragon Cynder, and the first of the Giants, a tree-like mammoth named Tree Rex. Current Skylanders owners who already have a Portal of Power can opt for a special Portal Owners pack including only the software and Tree Rex for $59.99. Character three-packs will run for $24.99.

Skylanders Giants is set to release this October for PlayStation 3, Xbox 360, Wii and Nintendo 3DS, with a Wii U release under consideration.