Nintendo's stereoscopic 3D portable will get an all-new, extra-large model this summer with the release of the Nintendo 3DS LL in Japan, a hardware update that introduces larger screens and a redesign to the system's exterior.

The 3DS LL will boast a new 4.88 inch stereoscopic 3D display screen, an increase from the 3.53 inch screen in the current Nintendo 3DS model. The system's secondary display, the touchscreen, will also see a size increase from 3 inches to 4.18 inches. 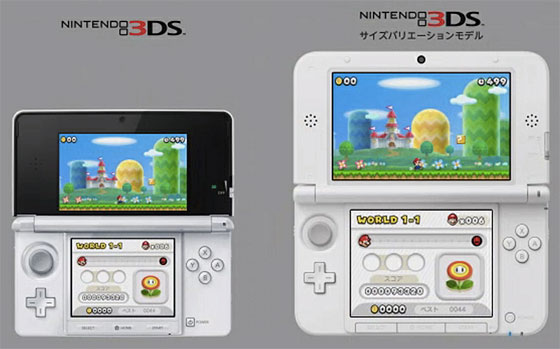 The Japanese version of the new Nintendo 3DS will come in three color variations: white, red and black, and silver and black.

The system will sport a longer battery life than the current Nintendo 3DS, but won't be packaged with an AC adapter in Japan. Nintendo will sell one separately and the 3DS LL will also support the original 3DS's AC adapter.