SimCity Social is a Facebook game by Maxis that will allow players to build metropolises reflective of their personality. Polygon interviewed Maxis producer Pete Lake about how Maxis has delivered a deep and engaging social experience through their social city building game.

Smoke billows from chimneys, smog releases in cartoonish puffs from factories and cars, and a sprawling city with angular monuments squints through the clouds of gray. It's an environmental disaster – that's for sure – but where a real city would wither and crumble under the weight of pollution, this city adopts it as a personality. Its creator has lit this city a virtual cigarette, breathed in deeply, and blown it right in our faces. "This is who we are," the smoke spells.

In another city, built by another person, run by a different mayor, a bright landscape covered in greenery and adorable homes smiles at us. The city is sunny, organized, and the streets are lined with broccoli-like trees. Parks are full of flowers and crystal-clear ponds. The inhabitants are the kind of people used to advertise breakfast cereal.

These are two different worlds created by two different people. Soon there will be more worlds, created by more people. In fact, when SimCity Social arrives on Facebook in the coming weeks, there could be up to 900 million unique cities puffing smoke, growing broccoli trees, and being everything in-between or even more extreme. 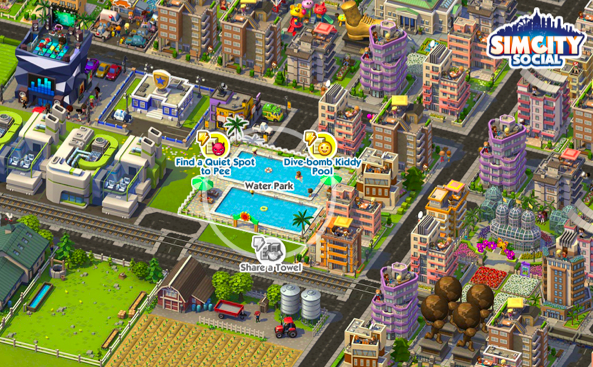 Announced earlier this month, SimCity Social is the Facebook version of the upcoming SimCity for PC, although it is less a "version of" and more a standalone experience built from the ground-up for Facebook. Where the PC SimCity planned for 2013 will be built on the Glassbox Engine and feature a strong multiplayer element, SimCity Social focuses on what a social platform like Facebook can bring to the game: friends.

A producer on SimCity Social, Pete Lake, told Polygon that the game is about bringing a real city building game to Facebook. It's a more accessible experience than the PC SimCity, but where many Facebook games sacrifice depth for accessibility, SimCity Social will endeavor to maintain Maxis' reputation of being a developer that understands satisfying city building simulation experiences.

"It's about playing with your friends, it's about bringing that real simulation experience from the 23 years of heritage we have at Maxis making SimCity," Lake says.

"We're adding that layer that Facebook allows us to do, which is add that real deep friend integration element into this social city building game. It allows you to build really deep and lasting relationships, and these relationships will change depending on how you build your city."

There could be up to 900 million unique cities puffing smoke, growing broccoli trees, and being everything in-between.

Like previous Sims games on Facebook, friends will be able to visit and interact with each other's cities. Lake opens a sprawling metropolis where a building is on fire – as a visitor to his friend's city, he can choose to help put the fire out, or he can pour gas on it to fan the flames. He can help his friends repair their buildings or he can invite homeless people to live in his friend's houses. When he leaves, he can leave gifts and messages for his friends. By allowing friends to visit each other, Lake says the social interactivity changes the way people build their cities.

"It becomes a very personal experience," he says. "More so than when you're playing on your own because as soon as you realize your friends are going to come and see your city, you want to put more of yourself in it as well. 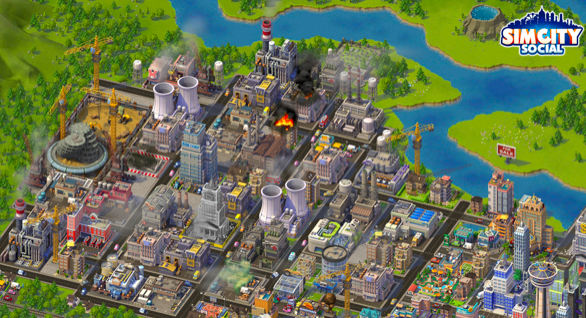 "The city building experience is about you and your personal identity and how you want to build that city and the choices you make."

Lake says SimCity Social is targeted at anyone who wants to build their own city. Having the game on Facebook allows players to use an existing friendship network to engage with other players and their cities, and also puts the game in front of 900 million Facebook users. Whether we will see 900 million smokey towns or broccoli trees – we'll have to wait and see.

SimCity Social will be released in the coming weeks. No official date has been announced.