Share All sharing options for: 'Offensive Combat' is bringing console-quality games to browsers

The men are poised, suited in armor, their weapons ready to be fired. The camera follows them as they enter a town enshrouded by the darkness of the night – they look around, they're ready for battle. Any moment now, the onslaught will begin. As the the team of space marines, war soldiers, and mish-mash of tough dudes prepare for attack, the first of the enemies skips past, arms waving maniacally, giggling like a hyena, dressed as a banana. Behind him, a yeti with chicken legs prances with a shotgun.

This isn't your average shooter. In fact, Offensive Combat isn't your average anything. Developed by U4IA, a studio formed less than a year ago and headed by seasoned game developers who made waves at Activision, Treyarch, and Sony Online Entertainment (SOE), Offensive Combat aims to be the first console-quality, free-to-play, browser-based first-person shooter. That's a lot of hyphens and adjectives. Its theme is that it has no theme – this isn't World War II, this isn't a galactic adventure, the world is not about to end, and good isn't fighting evil. The Team Fortress 2-esque shooter is drenched in irreverence – it doesn't fit traditional gaming molds, and that's exactly what its developers intended. 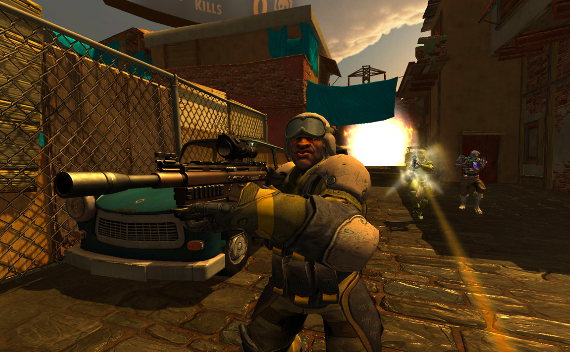 "When we were at SOE we were working on big subscription games and we were all thinking that everyone who's having success right now is going free-to-play," U4IA's co-founder, Chris Archer, told Polygon.

"So we asked ourselves how can you make a great quality game that's free-to-play? And then there was the whole untapped market of browser-based games. Nobody's been able to do a high-quality game in a browser. Everybody has a browser; the games just aren't there. Instead of spending two hours downloading a game, why not just be able to immediately play it?"

And so the challenge was presented, and the founders of U4IA, Chris Archer and Dusty Welch, assembled a team of 20 developers to tackle it. Their start-up from Bellevue, Washington would attempt to bring the console experience to a web browser with no lag, without the computer user needing to upgrade to a graphics card that can perform laser eye surgery, and without the need to download a client or code or the game. This certainly would be difficult, but the challenge itself wasn't the only thing that attracted Chris Archer to the project.

"Nobody's been able to do a high-quality game in a browser."

Archer says that consoles are a silo – with Xbox 360 users unable to play against PlayStation 3 users, and even PC users unable to play against console users, gamers are artificially separated when they don't need to be. The team at U4IA thought about the platform with which most people spent their time – the web browser – and focused on building something specifically for a platform that is often ignored. 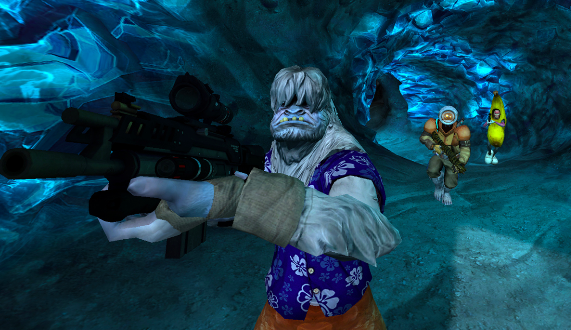 "What a lot of people do when they have multiple platforms is they go after the highest common denominator and everything else gets ported down," he says. "I've done it myself on many games, and what we did here was we took what is normally the lowest common denominator, which is the web browser, and we focused solely on making that a great experience, and if you do that, if you focus on one platform, you tend to get better quality out of it."

The result is a polished game that is almost inseparable from most PC shooters. The build of the game we were shown was only weeks from going into closed beta and it loaded in a browser within seconds and played as smoothly as a game running in a client. Players can customize their characters to resemble soldiers from their favorite AAA shooters, or they can don a pair of banana pants, a Halo-esque helmet, fit themselves with the torso of a space marine and, for an in-game transaction, they can purchase a "Pwn", a kind of victory move that can be performed whenever a kill is successfully executed. "Pwns" range from playing the air guitar to Arrested Development-inspired chicken dances, and an exaggerated teabagging action. If a player can successfully perform a "Pwn" without being killed by another player, they are rewarded with in-game loot. It's all a bit ridiculous, over the top, and decidedly meta, but again, that's exactly what the developers wanted it to be.

"...Nobody was taking a chance and they were all going after the top dog, so they're Call of Dutys or Call of Duty knock-offs or Counter Strike knock offs..."

"Players really want to show off their skills and have fun in an irreverent way, and surprisingly, some of our best players really like the rubber chicken and the funny banana suit. Sometimes you feel like you want to be something different, so our game is free-to-play: you're free to fight the way you want, free to play the way you want to play, and you have the full gambit of sci-fi maps, war maps and modern day combat maps at your disposal."

Chris Archer says their idea is so ridiculous that only an independent studio like U4IA could attempt it – few publishers would take a chance on a game that deviates so far from what traditionally sells in the first-person shooter market. Like Cheu, he believes it's important to change things up because sometimes players do just want something different.

"We saw that everything was looking the same and being the same; it took a lot of conversation and arguing to get the game to be as irreverent and as different as it is," Archer says. "What we saw was that nobody was taking a chance and they were all going after the top dog, so they're Call of Duty's or Call of Duty knock-offs or Counter Strike knock offs or some other knock-off or it's a space shooter and it's a knock-off of Unreal or Halo.

"There are just so many games in those spaces and none of them are allowing people to play the way they really want. Well, why shouldn't you be able to?" 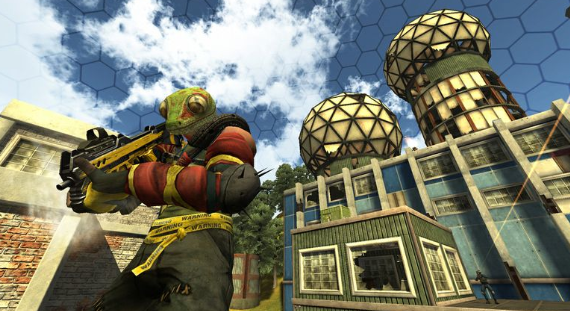 So the team at U4IA have gone the other way. They've made a meta mash-up. Instead of copying AAA shooters, they're giving a knowing wink to the Call of Duty's, the Halos, and the Dead Spaces of the world and arming their players with rubber chickens and banana pants. It's silly, yes. Archer admits that some people might even hate the banana pants. But he believes that at its core, Offensive Combat will deliver a competitive experience that players will understand and enjoy.

"Whether it's a war shooter or a space shooter or something irreverent like Offensive Combat, I think you end up getting into the same mindset when you play, which is ultimately a competitive mindset," he says.

"Once you get past whether you're a hardcore soldier or a space marine or a ridiculous-looking character, you get to do cool things and show off and have fun in the game. That's really what it's all about."

How to change Furfrou forms and Trims in Pokémon Go