Skylanders Spyro's Adventures may be getting a set of four special "sidekick" figures starting next month, according to a leaked Frito-Lay marketing sheet discovered by GameFaqs.

Skylanders Spyro's Adventures' four special "sidekick" figures will arrive with boxes of chips starting next month, according to a Frito-Lay marketing sheet discovered by GameFaqs.

The four sidekicks, tentatively named Mega Stealth, Super Trigger, Big Grunt and Mighty Finn, will be given away to customers who purchase specially marked boxes of Frito-Lay's Classic and Flavor 20 count Variety Packs over the summer and during the run-up to the start of school. It appears customers will have to mail away the a UPC from the variety pack, which cost about $6, to have the figure shipped to them.

The figures, redeemable with a code included in the boxes of chips, will come out in waves hitting on July 9, July 23, Aug. 6 and Aug. 20. 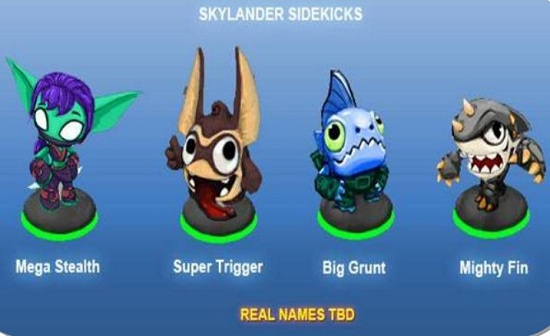 While the documentation doesn't describe the abilities of the figures, which will not be distributed or sold in stores, all four appear to be younger, cuter versions of existing Skylanders. Mega Stealth looks like a Stealth Elf, Super Trigger looks like Trigger Happy, Big Grunt looks like Gill Grunt and Mighty Fin looks like young Terrafin.

Rumors of the four figures first hit in April when trademarks were filed for the sidekicks. Gamers managed to unearth the figures in the game through a hacked copy of Skylanders as well.

This appears to be the latest step in a multi-phase promotion that was announced in April. The first phase, which kicked off that month, awarded multipack chip buyers with a code for unlocking the mini-game Skylanders Spyro's Universe.

We've reached out to Activision for comment and to confirm that this is a finalized deal that will be kicking off in July.