'Super Retro Squad' reinvents classic platformers from the pixels up

"I guess I just like the idea of making old things new." Jay Pavlina, Exploding Rabbit

Share All sharing options for: 'Super Retro Squad' reinvents classic platformers from the pixels up

Super Mario Crossover developer Exploding Rabbit has taken on the lofty goal of reinventing Mario, Zelda, Metroid and other classic NES-era franchises with its next project, Super Retro Squad.

Super Mario Crossover developer Exploding Rabbit has taken on the lofty goal of reinventing Mario, Zelda, Metroid and other classic NES-era franchises with its next project, Super Retro Squad.

Super Retro Squad was revealed last week with a Kickstarter campaign to raise $10,000 to bankroll the game's development — a task its already completed twice over. It shares a stylistic vein with Crossover - a 2010 Flash game programmed entirely by Jay Pavlina, which tosses Link, Mega Man, Samus and other Nintendo characters into the Mushroom Kingdom trappings of Super Mario Bros..

Unlike Crossover, however, Super Retro Squad will star a cast of original 8-bit heroes, each of which was clearly inspired by an old-school platformer. The Mega Man-like Mecha Boy, Belmont-esque Ramona and other pixelated archetypes will explore one another's worlds, explore side and vertical-scrolling levels, vanquish bosses and collect equipment and treasure using their sets of wildly disparate skills.

"I guess I just like the idea of making old things new."

Pavlina hopes to launch Super Retro Squad on Steam, iOS, Android and eventually on consoles. That scope would be ambitious for an established developer — it's even more audacious when you consider that Super Mario Crossover was Pavlina's very first game development project.

"I was always curious about making games, because I always liked playing games," Pavlina told Polygon. "So I just kind of, like, decided to give it a try. The reason I made Super Mario Crossover was because I didn't have to make any of the assets, I just had to learn how to program.

"I just made the game for myself to try to learn what it was like to make a game, and to finish a new project," Pavlina added, "I think the time I finished Super Mario Crossover, it had been two or three years since I did anything creatively. So I was kind of struggling creatively, but by the time I had launched the game, I had all my inspiration back, and I've been working ever since." 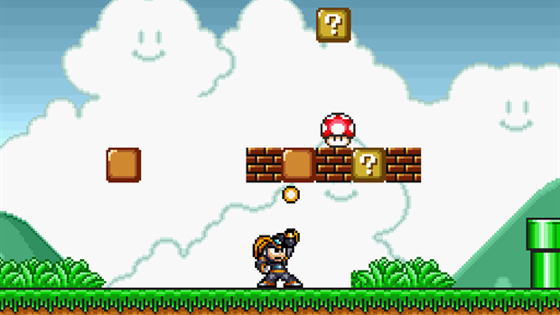 In the first version of Crossover, all of the assets were pulled directly from their 8-bit source material; however, with the launch of Version 2.0 came custom-made sprites, music and other touches, like filters to simulate other console generations — Game Boy, Super NES, and the like.

Pavlina had help over the past year as he made Crossover a project that Exploding Rabbit — his game development nom de plume turned studio masthead — could call its own. Still, the base game that's been aggressively expanded on was the product of Pavlina's self-taught programming ability.

"I don't know, I'm pretty good at teaching myself stuff," Pavlina said. "I also taught myself how to make movies and write music. You can pretty much teach yourself anything with the internet, now."

Pavlina hopes to turn Exploding Rabbit into a proper games development studio, a process he's already started by hiring seven team members to expedite Super Retro Squad. Some, Pavlina worked with on Crossover. Some, he recruited from the Unity forums; the platform upon which Super Retro Squad is being developed. The funds collected by the game's Kickstarter campaign will go towards their salaries.

"The reason we're asking for money is to make sure that everyone on the team can survive until we release the game," Pavlina jokes in his Kickstarter video.

"You can pretty much teach yourself anything with the internet, now."

The team certainly needs those funds, as apart from some nominal support from on-site ads, Pavlina hasn't made a dime off of Super Mario Crossover due to his lack of licensing partnerships with Nintendo, Konami, Capcom or any number of other companies whose IP the game repurposes. That's one of the main forces fueling the development of Super Retro Squad: A desire not only for renumeration, but ownership.

"Right now I've spent over three years on Super Mario Crossover," Pavlina said. "After I released the 2.0 version, I just started asking myself, like, 'Is this really worth it?' I mean, it was worth it to release the original game, but I was questioning if it's worth it to keep working on it, because I have goals for where I'd like Exploding Rabbit to go, and I know that I'll never get there if I keep working on the same game, and it's a game that I don't even own, and I can't legally do anything with it."

The question remains, then: Why would Pavlina focus his efforts on a platformer still so clearly inspired by those thoroughly locked-down properties?

"I guess it could just be the nostalgia," Pavlina said. "I kind of feel like those games are the games that started video games, and made video games popular, so it's kind of fun to make a new game that has all that old stuff in it. It's a fun, and a challenging process at the same time.

"I guess I just like the idea of making old things new," Pavlina added.