Reimagined Nuketown 2025 map for Black Ops 2 will be a preorderd bonus.

A futuristic reimagining of Call of Duty: Black Ops' Nuketown multiplayer map, Nuketown 2025, will be a limited edition preorder pack for Black Ops 2, according to photos of retail materials appearing on the internet yesterday.

Nuketown 2025 posters have been appearing in GameStop and GAME stores in the UK, say tipsters on GameFAQs and Se7ensins. "Relive the close quarters chaos of this classic fan-favorite map re-imagined in a visionary depiction of the model home of the future," promotional materials read.

While Nuketown 2025 has not been officially disclosed, GameStop has announced it will reveal the second preorder bonus for Black Ops 2 on July 1. Buyers who preordered before June 30th will receive a limited edition poster and a Call of Duty: Modern Warfare 3 Prestige token for purchasing rewards in MW3's Prestige Shop.

The original Nuketown map is one of the smallest in the Call of Duty franchise, stylized like a United States suburb that has been a testing ground for nuclear weapons.

We have contacted Activision and will update this story with a response. 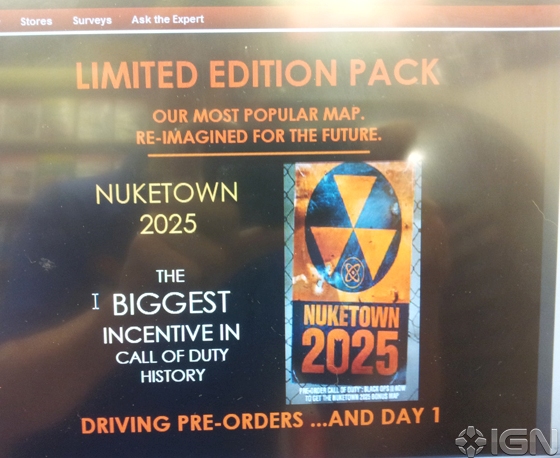