Madden NFL 13 on Vita is essentially Madden 12.5, thanks to limited resources and new hardware

Share All sharing options for: Madden NFL 13 on Vita is essentially Madden 12.5, thanks to limited resources and new hardware

Madden NFL 13 will mark the football franchise's debut on the PlayStation Vita, but in this case, the name is a misleading misnomer. EA Sports is updating last year's game with a few new elements, including Vita-specific controls, and releasing a handheld experience that shares the title of its revamped, promising console brethren — but barely resembles them otherwise.

Among those major improvements to Madden, only the brand-new commentary made it into Madden 13 on Vita.

I played the Vita game this week, and to be clear, it appears to be shaping up nicely. Most of the touch controls, such as the ability to tap on a receiver and draw hot routes with a finger, are smart and welcome additions. The game includes full Franchise and Superstar modes, and will receive monthly roster updates and weekly Madden Moments Live content throughout the 2012-13 NFL season. Of course, the graphics aren't quite up to par with Madden 12 on PS3, but they're still impressive on the Vita's five-inch screen.

Even that was a major challenge for HB Studios, the Nova Scotia-based company that is developing Madden 13 on Vita with oversight from Madden's home team at EA Tiburon in Orlando. Development began in earnest last September, shortly after Madden 12 shipped, which means that the Vita game's development cycle is similar to that of the console versions.

But supervising producer Dan Baker told me that it took until February of this year "just to get the code running," which is only the first step of the process. A long cycle of optimizing the code followed, but the Vita version wasn't ready for a press demo back in mid-April, when I visited EA Tiburon to play a pre-alpha version of Madden 13 on console. At the time, Baker said the early build was running at only 15 frames per second — about half of the desired frame rate. It still wasn't in a satisfactory state even by E3 earlier this month. Only this week, at an EA press event in New York, did the publisher exhibit the Vita game for the first time.

EA Canada had similar difficulties in bringing its venerated FIFA franchise to the Vita's North American launch lineup this February. Baker told me that the Madden team "spent a lot of time talking to" the studio, and according to him, EA Canada "kept kinda needing to add a few more people (here), a few more people (there)" in order to bring the project to fruition. "It's just a really big effort," explained Baker. Indeed, EA Canada also delivered a year-old game in FIFA on Vita: it was based on 2010's FIFA 11 instead of FIFA 12, which launched last September.

"It's just a really big effort"

That said, EA Sports decided not to call the Vita game "FIFA 12"; it launched simply as FIFA Soccer, even though its release came nearly four months after FIFA 12's. While Madden is coming out on Vita alongside its console siblings on August 28th, it is disingenuous for EA Sports to market it as "Madden NFL 13," and consumers who buy it expecting a shrunken-down version of this year's console experience will be sorely disappointed.

Considering Baker's chronicle of the Vita version's difficulties, and the console versions' unique development history, it's not surprising that Madden 13 is so different on the handheld. During my time at EA Tiburon in April, I spoke with executive producer Roy Harvey, as well as Cam Weber, EA Sports' general manager of American football. They revealed that the decision to implement a real-time physics engine in Madden 13 came relatively late in the development cycle: they weren't sure until January if they were going to try to get it in this year, or wait until Madden NFL 14.

That real-time physics system, the Infinity Engine — along with the other significant franchise overhauls that Tiburon is promising in Madden 13 — came out of what Weber characterized as an unprecedented investment in football from EA Sports. Over the past year and a half, EA Tiburon has nearly tripled its core football staff. The expansion included the addition of 65 technology positions, so the studio can think ahead to the next console generation "while ... also building the games of today," Weber explained in April. 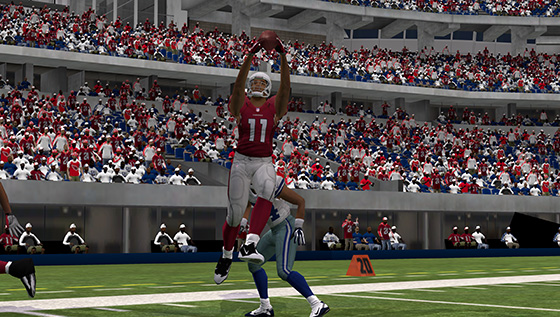 But from my conversation with Baker this week, I got the sense that Electronic Arts may be unwilling at this point to extend that investment to the Vita. Tiburon is heavily focused on delivering innovation in Madden's console versions, and "there's just no way," Baker told me, for the handheld game to "keep total lockstep" with them.

"Unless you're gonna throw, like, a tremendous amount of resources at (the handheld version) and try to keep them in sync," he said, "it's just not a realistic possibility at this point."

Money and time are the most severe limiting factors in game development, so if the financial resources aren't there, why not delay the project? With another year in the oven, wouldn't Madden NFL 14 on Vita have a decent chance of delivering the purportedly series-defining changes coming in this year's console game?

Baker pointed out that because Madden is a tent-pole franchise for any hardware platform, both EA Sports and platform holders — Sony, in this case — have a vested interest in getting out a Madden game as soon as possible. "We obviously partner with Sony on this stuff, and they were definitely kinda pushing us: 'Hey, we want this with the rest of the Madden products (in August),'" he explained.

In the face of outside pressures, internal trepidation, and development constraints, EA Tiburon and HB Studios remain focused. Since Madden 13 on Vita must hew closer to Madden 12, the team wants to make it the definitive version of last year's game. "We did everything we could to make this the best experience we could for this year, with the time we have," Baker told me. The fans will tell him and EA if their effort was enough.