How 'Forza Horizon' turned Colorado into an open-world race track

Share All sharing options for: How 'Forza Horizon' turned Colorado into an open-world race track

The first time Gavin Raeburn and Ralph Fulton met Forza famous Dan Greenawalt was at E3 2010. The three of them, old hands in racing game development, came together for dinner and a conversation about what the future looked like for the franchise. Greenawalt would tell them his pitch, which went: he wanted to turn car lovers into gamer and gamers into car lovers. Both Raeburn and Fulton already were, luckily -- Raeburn came from Codemaster, as did Fulton. The two of them had experienced the changes in the genre over the last decade, coming out of the UK industry's busy racing scene.

Two years later, they were out the door with development seats at a newly formed Playground Games, a studio that would go on to poach developers from around the UK's racing game industry - Blackrock, Bizarre, Slightly Mad, to name a few - and with Greenawalt's Turn 10 Studios they would expand Forza into a hulking open world racing game.

"Back then there was just a handful of us. The one new thing with this development as opposed to previous ones I've been a part of is that in this we're not only building a game, we're building a studio as well," says Fulton of Playground's early days of development.

This would be their first title as a new team, put together with Fulton as design director of their office in Leamington Spa, a concrete-laden spa town two hours from London. For Horizon they looked Westward for influences. The studio studied over 30 areas across the world to gauge the best terrain for a large-scale racing game, only to end up in Colorado, taking thousands of pictures of foothills, ski towns, mining towns, canyons, and miles of road. This is the state they'd start to build. 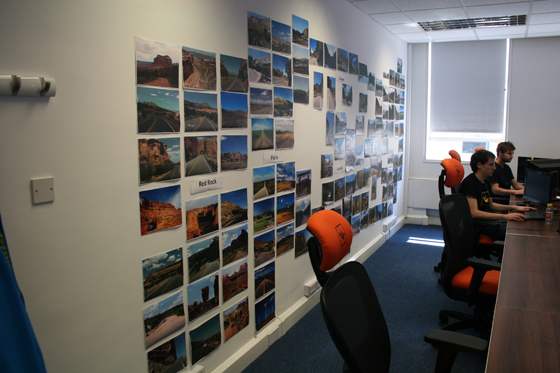 "Not the entirety of Colorado," Fulton admits. "What we've done is looked at the full of Colorado and picked out the best of it. We've also picked the best roads. Not all roads are built for driving so where they're not we've taken license. Some of those roads are fantastic so we put them in the game and didn't change them. But some aren't fantastic so with our experience of building tracks we turned them into fantastic roads. So every single one in horizon tells a story and has an experience to it."

Their Colorado state is a festival town: one part Coachella music festival, combined with highways and back-roads of 20-something delinquent racers. The Horizon festival brings youth culture and music festivals together with car culture, part of Playground's effort to create a fantasy world where cars and music can cohabitate under a banner of hedonism and where racing fans could genuflect at the altar of EDM.

The game would be about popularity. In single-player you aim to reach the final in the Horizon Championships, but your goal around the local roads of Colorado is to accrue popularity among your peers, showing off driving skills to earn points that lead to increased popularity, more money, better cars and invitations to prestigious driving events.

These are Horizon's Showcase Events, novelty tournaments that include races against Mustang aircrafts which follow a flight path somewhere above you while you navigate a long stretch of highway. Any of the events raced in single player can be taken into the online competitive world. Rivals Mode lets you attempt to beat a friend's time, and speed traps measure your speed compared to others on your friends list and notify them the next time they load up the game. 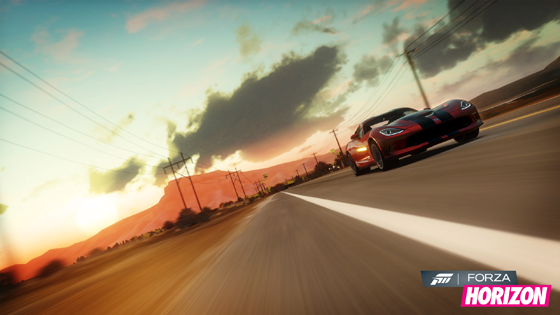 But Playground wanted things to happen at a micro-level as well. Using Forza's driving AI system, the team populated the roads with civilian drivers and fellow festival goers who roam both independently of and throughout the main races.

"You'll catch them doing lots of different things," Fulton explains. "They'll drive, they know exactly where they want to go, they'll change their minds, sometimes they'll meet up with other drivers and start races independently of the player. But the player, when he meets them can absolutely challenge them to a race whenever and wherever he meets them, and he can win cash for doing that."

Outside they would offer 65 different types of surface terrain, Fulton boasts, along with day and night cycles that provide different racing conditions across the state. Playground would go on to emphasize the tourist-friendly vista shots of Colorado in its game. The team introduced a system that allows for draw distances reaching for miles to retain their visual quality - none of those fog of war distortions, what you see a mile away would look the way it would if you really were driving across state with a view of mountain ridges and canyons up ahead. For this to happen they sacrificed Forza 4's frame rate of 60 frames per second, bumping it down by half. The level of detail would be impossible otherwise, they say. 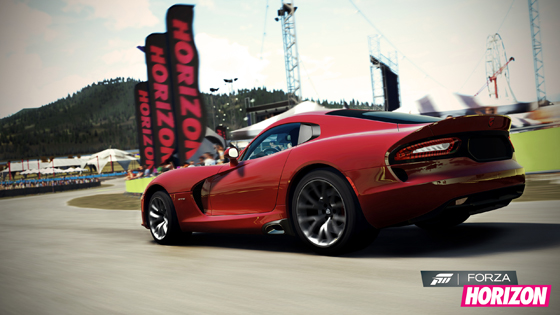 While festival races would stay relatively linear, using barriers and crowds to gently nudge drivers in the right direction, street races would be a bit more reckless. "We have a golf course," says Fulton about the open world. "I have a great car; I want to drive over that golf course." The studio wanted to allow players to improvise in between the start and finish line.

Only, drivers kept getting lost. Playground decided to use Kinect as the remedy. They integrated what they call their GPS device, which lets users say their destination name aloud using Kinect's voice commands, triggering a cookie-crumb trail.

"We looked at a wide range of different ideas," says Fulton. "We looked at gesture controls that are obviously a big thing with Kinect. We felt that that wasn't right for our title. Our title was always going to be controlled exclusively with a control pad or with a wheel. Immediately there were some ideas there that we put on the backburner. We looked at head tracking which was something that was in Forza 4. Ultimately we felt that that was just a real Forza Motorsport feature. It's something that's useful when you're on the race track, but it made less sense when you're driving in the open world."

"Our design team brainstormed loads and loads of really cool ideas of what you can do with Kinect. It's a fantastic new tool for designers to get something more out of a game. But when it came down to it there was one that stood out. Not only being a really cool thing in its own right but also it solved a couple problems that we had with our game and what you see in other racing games as well. So that was the one that we really went with, we put our bets on that one." 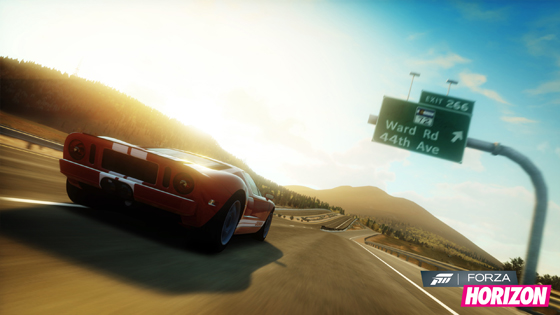 Back in their endless music festival, Horizon - they decided -- would be curated by English DJ and festival promoter Rob Da Bank. The team hired him on to develop three radio channels to provide a backing soundtrack to every race. The first would be modeled on BBC radio's Annie Mac, with a playlist of electro, dub step and drum & bass. Fictional radio DJs would added to give users updates on events and your status in the game. Channel 2 was modeled "very modestly" on Rob's own radio show - a combination of indie dance and indie rock, ranging somewhere in between Friendly Fires and Two Door Cinema Club, and leading to The Subways' Rock & Roll Queen and Nero's Me & You played throughout the demo.

"Channel 3 was probably the most challenging for me musically," Rob says. "It's sort of more heavy rock verging on metal at times. We were looking through different genres and deciding should it be a hip hop one, should it be drum and bass one. We settled on that as energetic driving music."

Rob would go on to advise the team on how to develop a digital festival based on his professional experience behind the UK's summer Bestival music festival.

"When we were first showing Rob the game, we were explaining 'this is the Horizon festival, this is how you drive into it,' and Rob said 'No, that would be a health and safety nightmare!'" says Fulton of Rob's work on the game. "Which I guess is kind of true, driving 150 miles an hour through a festival is probably impractical except in a video game."

But despite the suggestion that driving in the setting might prove unrealistic, Fulton emphasizes Forza Horizon is not another arcade racer, arguing the game's physics technology push further into driving realism. Open world racing games of the past have been characterized by their arcade template, he says, leaving all cars to feel identical. "This has this bedrock of really solid physics technology. We call it an action racing game," Fulton says.

"You probably could have gotten away with arcade handling maybe five years ago but now gamers are much more savvy."