Wario graduates from micro-games to mini-games

Share All sharing options for: Game & Wario brings hints of Pokémon Snap, WarioWare to Wii U

Nintendo fans longing for a return of the engrossing photography adventure Pokémon Snap for the Nintendo 64 will be delighted to learn that some of that game lives in a new Wii U game, Game & Wario.

Game & Wario is a collection of mini-games coming to Nintendo's new console sometime around launch. The game experiences are not the seconds-long "micro-games" of past WarioWare titles, but rather a collection of bite-sized randomness that can be enjoyed in minutes. Each mini-game sports a simple title: Ski, Fruit, Arrow and Shutter; short and to the point, like the liquid crystal Game & Watch games – hence the name – that Nintendo used to make.

And each Game & Wario mini-game uses the Wii U's GamePad in a different and creative way.

In "Arrow," the GamePad's touchscreen is used to simulate a bow and arrow as players fend off a swarm of Wariobots of different models. The bow is styled to look like Wario's pink nose and jagged moustache. Players can tickle Wario's disembodied nose with shots of pepper to create "sneeze arrows," a deadlier variation on the standard shot.

"Ski" uses the tilt functions of the Wii U GamePad, tilting a skier down a hill on the controller's screen. On the television, recurring WarioWare character Jimmy T does some funky skiing and even funkier tricks to the delight of whoever might be watching you play Game & Wario. "Ski" is all about perfecting your run, aiming for shorter times and the bronze, silver and gold medals one can achieve. 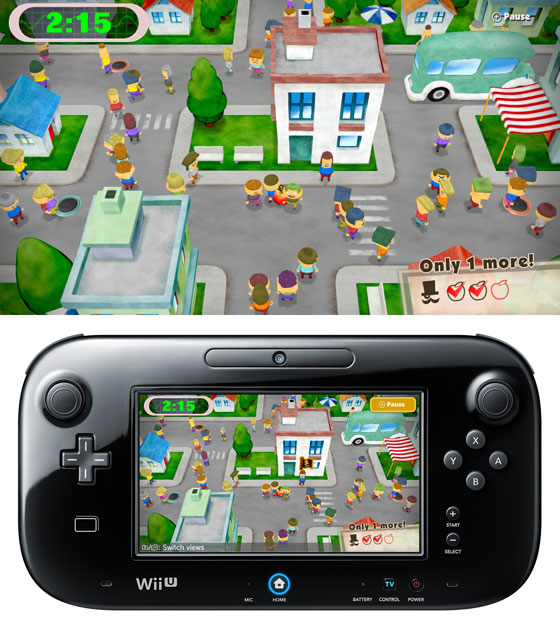 "Fruit" feels like something of a bust. Only one player has a controller, the GamePad, attempting to steal fruit amongst a crowd of lookalikes while other players look on. If the players without controllers – Agents, they're called – can correctly identify the fruit thief at the end of his apple-stealing spree, they win. What's the problem? It's far too easy to spot the thief and just not much fun to play as him.

It may be "Shutter" that helps save Game & Wario. That's the mini-game with the spirit of Pokémon Snap in it. It's another mini-game in which criminals must be spotted in a crowd, but in "Shutter" the player with the GamePad scans the television screen looking for five suspects, attempting to take a publish-worthy photograph of each. The GamePad's screen acts like the zoomed-in viewscreen of a camera, and players are rewarded for taking shots that feature full frame, well positioned and unobscured pictures. Capture your subject too small or while she's blinking and you'll be docked a few points. Limited time and exposures add some tension to the picture taking, but the action takes place on a single screen.

Game & Wario's hints of Pokémon Snap may not be enough to last, for we don't yet know whether the game will provide the longer term discoveries and replayability of that underappreciated Nintendo 64 classic, but we'll take what we can get.