Share All sharing options for: Project P-100 for Wii U saves E3 with a pint-sized team of avengers

Easily the most pleasant surprise for the Wii U at E3 2012 was Project P-100, the newest action game from some of the developers behind Bayonetta, Okami and Viewtiful Joe.

Project P-100 is the latest from Platinum Games, which is also hard at work on Anarchy Reigns and Metal Gear Rising: Revengeance. It's directed by Hideki Kamiya, whose credits include Resident Evil 2 and the Viewtiful Joe series, and published by Nintendo.

From a distance, the action game looks vaguely like Nintendo's Pikmin series, giving the player control of more than a dozen heroes at once, sending them into battle to clobber an alien threat. Visually, there's a touch of Viewtiful Joe's charm to it, with spandex clad heroes smashing through a toy-like town.

Your super hero squad, which move around in a kinetic cluster, can fight in two key ways: Team Attacks and Unite Attacks. Team Attacks are button mashing rushes that see your super group bash with punches and kicks, a move that charges up an on-screen stack of batteries. When your team's batteries are all juiced up, they can unleash Unite Attacks, a special move that turns your crew into a giant red fist, sword or glowing green pistol.

To transform your team into a Green Lantern-like handgun or a towering sword made of a stack of heroes, you'll need to draw on the Wii U GamePad screen. A circle generates a Unite Hand, an upward swipe a Unite Sword. 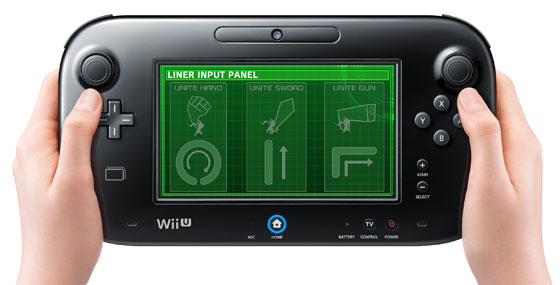 Jamming on the GamePad's A button unleashes those Unite Attacks in a flurry until the batteries run dry. Players can also add a little flourish to those Unite moves. Drawing on Kamiya's Capcom background, players can input button combos that transform the normal Unite Hand punch into a Street Fighter II-style uppercut or fire off a "Sonic Boom" from the Unite Gun.

Project P-100's team of mini super heroes can also pull of united defensive moves as well, turning into what looks like a Jell-O mould that renders them invulnerable for a short time or a hangglider to float across gaps. The Unite Dodge, something like a protective Slinky, arcs your heroes out of the way of enemy attacks.

The strength of your superhero team's attacks grows as more heroes (and citizens) align themselves with your cause. As your team of heroes charges through the game's various disasters and giant robot attacks, you'll encounter firefighters, soldiers, policemen and little girls in pretty dresses. Draw a circle on the GamePad touchscreen and you'll sweep them up into your group, turning them from average Joes into battle ready Viewtiful Joes.

The Project P-100 demo at Nintendo's booth featured a quick run through of a suburb under siege by giant mechanized threats, like the chunky tank Hohdan, and armored soldiers. It ended on the forearms of a super-sized robot that attempts to blast you with eye lasers. And at one point, the action moved from the television screen to the GamePad screen, giving the player a behind-the-shoulder, third-person view of the main hero as he moved through a warehouse to solve a puzzle.

Project P-100 was one of the highlights of Nintendo's Wii U line up, a game rich with Americana style and positive, can-do alien busting. With P-100, Platinum Games action game expertise explores a new, exciting perspective, and we think it's worth watching.

Keep an eye out for Project P-100 when it hits alongside the launch window of the Wii U, which is due later this year.