Songlines creation-myth sandbox for Kinect invokes the sublimity in humanity

Play god and create the world from scratch

Share All sharing options for: Songlines creation-myth sandbox for Kinect invokes the sublimity in humanity

Songlines, a Kinect game featured at this year's E3 IndieCade, weaves a colorful story of world creation. Players take on the role of a rainbow-riding deity from indigenous Australian creation myth to sculpt a habitable world using body gestures.

The game is based on Australian aboriginal mythology and is a retooling of the culture's creation story. The artwork and music are influenced by the aborigine traditions, with its frequently-present pattern of swirling circles and concentric dotted lines modeled after ancient cave paintings discovered on the continent.

Designer Samantha Vick and her team of ten created Songlines for a student project. Her deep interest in creation myths stems from her background in comparative mythology. Her studies brought her to the creation myth of Australia's indigenous peoples, and Vick fell in love with the story's elegant simplicity and joyful nature. "The game is about creation, a rather simple act," says Vick. "We wanted to create a game that will appeal to everyone based on our shared humanity."

"I didn't want the game to have any words, and I wanted the controls to be simple enough for anyone to pick it up," she said.

The aborigine creation myth begins with a flat, featureless earth until the arrival of creation spirits stirs the sleeping world. Everywhere they walk plants grow and ice melts into rivers and oceans. Gradually they build the landscape and populate the world with creatures and people, ending their work by placing themselves into rock faces to watch over their creations for all time.

"I love that it holds their attention because it's beautiful, not violent."

The goddess of Songlines has the same end-goal, but her tale is a little different. She is a spirit of rainbows, and seeing the empty world inspires her to create one. Being new to world-creation, she asks her animal friends for advice, and throughout the game they will often appear to guide her and suggest environmental elements for inclusion.

Raising both hands in the air lets players choose the type of terrain to create – mountains, grasslands, trees, water, or desert. Once a terrain is selected the goddess will move forward on her own, leaving a rainbow trail behind her marking the places she has already touched. Leaning forward makes her fly faster, and waving your arms causes the landscape to become the environment of choice. We selected trees and watched as a forest of green leaves sprung up. Passing over a desert, mountain, or grassland will bring different types of trees into existence. Every five minutes the scene will change from day to night. 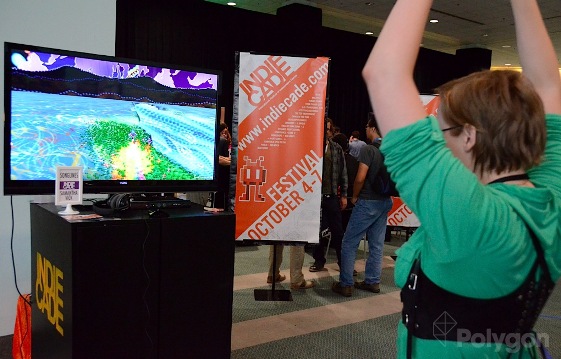 Vick says that the younger crowd has been particularly drawn to Songlines. "The game is meant for everyone, but children tend to gravitate towards it. I've had kids come and stare at it and ask to play. I even had a little girl who was so small I had to angle the Kinect downwards.

It's not often a Kinect title makes players feel graceful and encourages creation rather than destruction.

"I love that it holds their attention because it's beautiful, not violent," she added.

The Song in Songlines comes from the game's soundtrack, which is a recombinant system comprised of 400 four-second loops arranged into suites. Each suite is ascribed to a single in-game occurrence, with each nuanced movement of the goddess or sprouting tree heralded by a unique tune and instrument. The suites are combined and strung together based entirely on the player's actions. "We have a drum suite which plays as you make mountains, the plucked string suite that plays for forests, the woodwind suite for water... Everything from the distance between your hands to the placement of your hands makes the background music simpler or more complex," said Vick.

For the future, Vick and her crew are hoping to add more features such as multiplayer, a mission-based mode, and a rewards system. "We're thinking about a competitive land-grab-style multiplayer. Depending on how big we want to go, we'd love to have different types of landscapes with different suites of music. We would also like to add animal creation and people creation and even man-made structures."

It's not often a Kinect title makes players feel graceful and encourages creation rather than destruction. Songlines is an inspiring break from skill-based games, presenting a bright, unconventional take on the sandbox.