Impressions of Dark Souls: Prepare to Die Edition for PC from E3 2012.

With every bit of good news related to Dark Souls for the PC comes a touch of the bad. Yes, From Software's Windows PC port of 2011's challenging role-playing is coming soon to Steam and, yes, there are some graphics settings for players who prefer something better than 720p resolution.

And, sure, the new content that From Software is adding with Dark Souls: Prepare to Die Edition looks inspired. The environments and enemy designs continue to astound. But there is clearly some difficulty in getting Dark Souls running on PC, which the game's developers admitted to at E3.

On display behind closed doors at E3 was Dark Souls: Prepare to Die Edition running on an Origin brand PC. Representatives from publisher Namco Bandai showed portions of the expanded Dark Souls, mostly Royal Wood, what appeared to be an extension or rework of the game's Dark Root Basin area.

Royal Wood looked a bit different from the Dark Root that Dark Souls players may be familiar with. That's partly due to the setting of the new location, which exists some 200 to 300 years before the events of Dark Souls.

Namco Bandai's Daisuke Uchiyama says that the process through which players will time travel to Royal Wood is "complicated" and that traveling there will happen during the latter half of the game.

Royal Wood is populated with monsters that appear to be made of sticks and rags, monsters that attack the player massive scissors. It's in Royal Wood where players will face a spiked black dragon – a massive beast that the rep running our demo simply ran past – and battle the knight at the core of Dark Souls' expansion, Artorias of the Abyss. 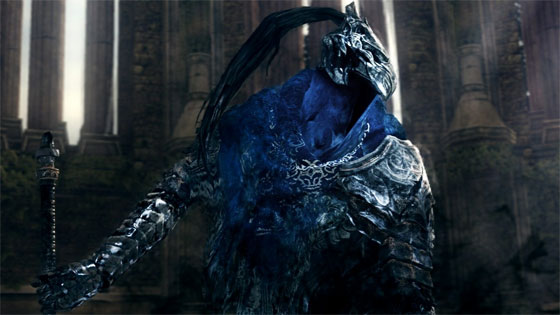 Artorias is the dark knight mentioned in Dark Souls in-game lore, one of the soldiers who betrayed Lord Gwyn and the wielder of the Wolf Ring. He wields a greatsword in one arm only, as the other arm appears limp. Expect fast, powerful attacks from Artorias when you encounter him in Dark Souls later this year.

Namco Bandai also had another boss battle running at E3 2012, a battle with the chimera-like Sanctuary Guardian. The white winged lion spits electric charges from the front and attacks with a poisoned bit from its snake-tail.

Uchiyama says that everything that appears in Dark Souls: Prepare to Die Edition for PC (and the "Artorias of the Abyss" downloadable add-on coming to Dark Souls for PS3 and Xbox 360 later this year) was created after the development of the original game. It was designed in response to fan requests for a PC version of the game and, save for the repurposing of some Dark Souls environments, won't be using content cut from the original build of the game.

Players can expect to see three new venues in the expansion and fight four new bosses, as well as an undefined number of other new creatures. Don't expect to see some of the concept characters that appeared in the Dark Souls art book, Uchiyama said, saying some monster designs – like the fat minister riding a boar demon – will remain on the cutting room floor.

On the technical side, it's worth noting that Dark Souls running on the PC had some of the inconsistent frame rate problems of the original game. It was also running in a window, not full screen, during E3 demos, presumably to boost performance of the build. We did watch the developers change the game's resolution, however, a feature that was questioned to be included in the PC port.

Uchiyama says From Software and Namco Bandai are "still in the midst of development" of the PC version, hoping to improve performance of the game as they enter crunch time. Developing Dark Souls' PC port, Uchiyama concedes, has been difficult.

"A lot of Japanese developers lack experience developing on the PC," Uchiyama explained. "It has been a lot more work and more difficult than we expected." Uchiyama remained positive, saying that development is progressing "fairly well."

For the DLC release of "Artorias of the Abyss" for consoles, Uchiyama says Namco Bandai doesn't have details to share on how players who own the expansion (and its new weapons, armor and items) will connect with those who don't. But he did say that the add-on skewed a bit more difficult than the designers had originally intended.

"We want people to be able to play with each other, because of the game's unique online component," he said through a translator. "We will continue to announce more about the DLC as we nail it down."

Dark Souls: Prepare to Die Edition will come to PC on August 24, with the downloadable content coming to consoles later this year.