Who's to say the ancient Greeks didn't invent multiplayer?

Hands-on impressions of God of War: Ascension for PlayStation 3.

The developers of God of War: Ascension are teaching the old god a few new tricks - and not just by grafting on a multiplayer mode to the PlayStation 3 prequel.

Changes are coming to the single-player side of Sony's bloody God of War series, changes that may not have been apparent during our first look at Ascension's campaign from earlier this week.

Sony sped through the single-player portion of God of War: Ascension at its E3 2012 press conference. Later, at Sony's PlayStation booth, the company provided extra context, explaining what Kratos' new super powers were all about and the proper way to viciously execute an Elephantaur.

The slice of God of War: Ascension seen at Sony's E3 press conference and at its booth hits at the game's halfway point, we're told. Kratos is heading to the Island of Delos when a sea monster called the Charybdis – that tentacled monster commonly misidentified as a Kraken – starts whipping her tentacles at our anti-hero.

At Delos, we learn new things about Kratos. The future God of War still has "a little bit of humanity" within him, as illustrated by the fact that Kratos cares enough to save a bystander from certain death – something he'd never bother with in previous games.

Kratos also has the option to wield a sub-weapon in addition to his trademark Blades of Chaos. Sub-weapons (swords, spears, axes, hammers, etc.) can be snatched from corpses or from the enemies Kratos is currently battling. Ascension's combo systems lets Kratos mix sub-weapon attacks into his other attacks, adding a bit more variety to the slaughter. When Kratos is not armed with a sub-weapon, he'll resort to using his fists.

Kratos can now also use his Blades of Chaos as a tether, lassoing an enemy with one chain-blade then using his free arm to attack another. The tether move is an evolution of the grapple that Kratos could employ in God of War 3 and looks to aid with crowd control.

"We'd never let enemies manhandle Kratos like this before."

Another change to Kratos is how he unleashes his seemingly bottomless rage. Rather than wait for players to build up an onscreen rage meter, Kratos will unleash fire and fury automatically, altering his attacks and animations. According to game designer Jeff Magers, Sony Santa Monica Studios recognized that many players underused Kratos' rage powers.

God of War: Ascension also introduces a brand new puzzle solving power for Kratos. In Sony's E3 demo, Kratos irradiated a green glowing energy that could repair or destroy certain structures – essentially sending them forward and backward in time, from fully destroyed to pristine. We're told Kratos will use this "Life Cycle" power to repair and dismantle architecture. The most interesting use of this new power was how Magers solved one particular puzzle, only half-repairing a tower so that Kratos could climb up a beam that hovered half-broken in mid-air, then fulling repairing that tower after he'd climbed it.

Yet another change coming in God of War: Ascension will be "prompt-less" quick time events. That gruesome, brain-spewing finishing move performed on the Elephantaur in Sony's demo? That was an example of the new variation on the series' tried and true mini-games. No button hints will be displayed onscreen during those segments. Instead, players will need to pay attention to visual cues to know when best to attack, dodge or jam a serrated blade into an elephant-man's skull.

One final change Sony Santa Monica tried to telegraph with its God of War: Ascension showing was the threat of big bad guys, specifically that Elephantaur. At one point during the demo, he snatches Kratos into the air, attempting to crush him. Magers said the studio wanted AI-controlled enemies to feel "more intimidating" by manhandling Kratos a bit more, rather than presenting him as an invincible god-killer. 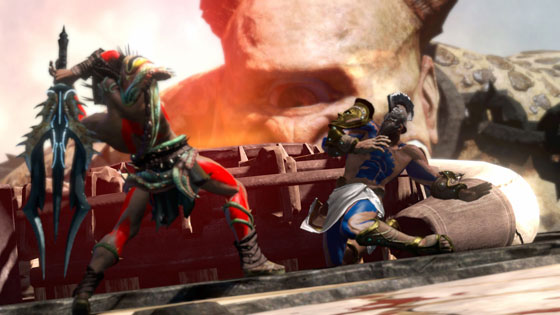 Sony also gave E3 2012 attendees our first hands-on experience with God of War: Ascension's multiplayer mode, essentially a four-on-four beat 'em up. Points are awarded for killing your enemies, opening chests and killing the giant cyclops chained to the level. First to 5,000 wins.

Players could lightly customize their Spartan or Trojan, choosing heavy armor or lighter, magic resistant armor; a choice of sword or hammer; and one of two types of magic. The game was domination, tasking each team with grabbing and controlling a group of territories. The competition to snatch those territories was vicious.

Multiplayer combat felt true to the God of War series' campaigns. Everything hits with a big, weighty punch, whether you're assaulting your foe with lighter, faster attacks or a slower but unblockable heavy attack. Blocks, parries and rolling dodges bring defensive options to the multiplayer brawl.

After our team managed to dominate those control points, the Spear of Olympus shot like a bolt from the sky. It's arrival signaled the end of the multiplayer match, as the first person to grab it was expected to pierce the bulging eye of Polyphemus – you know, the towering cyclops that's observing the Spartan-Trojan battle playing out before him.

The team that manages to snatch the Spear of Olympus first and put it in the eye of Polyphemus will score big, perhaps pushing them into the lead on the game's point-based scoreboard. The final shot isn't as graphically violent as the jaw-bisecting, gore-spewing attack on Polyphemus, as his pierced eyeball emits only light.

As unusual as a multiplayer brawl may sound in a God of War game, Ascension's take seems to work. The player's limited view of the battlefield and the deep combat mechanics make God of War's first multiplayer attempt feel like a contender.

But our time with God of War: Ascension was limited. We'll know how well ancient Greek multiplayer battles hold up when the game hits the PlayStation 3 in March of next year.