'Hero Academy' and finding a home for asynchronous play on Steam

"It lets you play at your own pace on whatever system you like the most." David Kublak, Robot Entertainment

Share All sharing options for: 'Hero Academy' and finding a home for asynchronous play on Steam

Hero Academy is coming to Steam, and bringing with it a method of multiplayer that hasn't yet found a foothold on Valve's digital distribution platform: asynchronous play.

Hero Academy is coming to Steam, and bringing with it a method of multiplayer that hasn't yet found a foothold on Valve's digital distribution platform: asynchronous play.

Though asynchronous multiplayer is the bread-and-butter for human interaction on mobile devices, it's not big on Steam — or any other gaming platform, for that matter. Perhaps that's because it's well suited to the not-always-ideal connectivity of mobile devices, and the inconsistent way in which we use them. In other words, playing a multiplayer console or PC game requires you to set some gaming time apart for yourself. Playing Words With Friends just requires you to pick up your phone for a bite-sized turn.

Robot Entertainment is hoping that you'll maintain your mobile proclivities when Hero Academy launches on Steam August 9th, bringing with it total cross-platform compatibility with the other versions of the game, as well as a new team: the gang from Team Fortress 2. Balancing the nine-strong group of Scouts, Pyros, Medics and other TF2 archetypes with the traditional, five-to-six-hero teams isn't the only roadbump Robot needs to overcome. The developer also needs to make the briskly-paced architecture of the mobile game work on a non-mobile platform.

Where some might see a challenge, Robot Entertainment's David Kublak sees an opportunity.

"There is an opportunity, I think, for asynchronous to find a market on Steam," Kublak told Polygon. "I log into Steam every time I turn on my computer, but I'm not always in a game. There's lots of other things that I'm doing. But if I was kind of reminded of a game that was there, and play at my own pace, I could be playing with Steam a lot more often than I do right now." 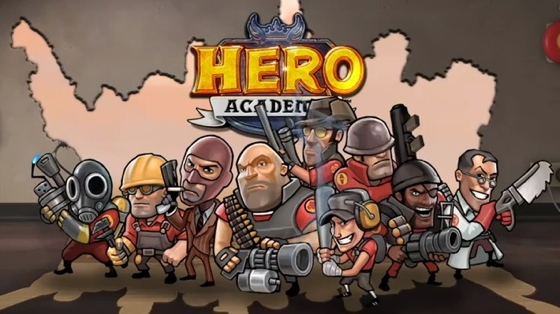 Notifications are a big way asynchronous games keep players engaged on mobile platforms, and the Steam version of Hero Academy won't buck that strategy. The game is "incredibly lightweight," meaning players can keep it open in their tray without eating up too much processing power. Whenever a turn is available, a tray notification will let them click through, right into the available match.

The user interface has been revamped to offer a single-screen experience — not only is the game board present on the screen, but the chat log and a list of all your matches are all instantly accessible on one screen. Current games are sorted into two distinct lists — effectively "Your Turn" games and "Their Turn" games — and update automatically in real-time.

"It lets you play at your own pace on whatever system you like the most."

That instant updating also allows you to play multiplayer against a friend in real time, should you both choose to do so. Rather than having to boot to the main menu and wait for a game to refresh to reflect your opponent's moves, they show up as they're executed. You could easily sit in a match, chat with a friend and take your turns, knocking out a game in a matter of minutes rather than a matter of days.

It's that broad spectrum of choice that Robot is hoping will help Hero Academy take off on Steam.

"The big thing is that back-and-forth, and how you want to use it," Kublak said. "Since you can seamlessly play between devices, I can take a turn on my phone and then when I'm on my computer to check my email or update Facebook or something like that, I'm able to pick up where I left off. If I just finished playing a different game, I could have a couple of moves available. It lets you play at your own pace on whatever system you like the most."

Hero Academy will launch on Steam on August 8th. The iOS app is free to download right now, and includes one free team — other teams are unlocked through in-app purchases. The Team Fortress 2 team will also be playable in the mobile versions, but only after you've purchased the Steam version of Hero Academy.