The star of The Punisher is launching a Kickstarter campaign for a video game adaptation of comic book series Bad Planet.

Bad Planet, a video game based on the comic book series by Hollywood actor Thomas Jane — known for his starring role as The Punisher and in HBO series Hung — is beginning its Kickstarter campaign today with hopes of reaching a goal of $575,000.

If funded, players will have the chance to experience a hyper-violent, episodic third-person sci-fi action game. The game will follow the story of a plague of inter-galactic Death Spiders that invade Earth, and an alien warrior called the Convict who attempts to save the planet.

Speaking to Polygon, Jane, whose science fiction comic series is produced by his very own RAW Studios, stated his interest in comics stems back to his childhood.

"I got into Mad Magazine when I was a kid and that opened the door to the whole pre-code world of EC comics, Tales From The Crypt, Shock and Suspenstories, Weird Science, that whole world of great artists and writers," he said. "As I got older I discovered the undergrounds and artists like Robert Crumb and Kim Dietch.

"I was never much of a superhero guy. My thing was sci-fi, horror, crime comics, and pulp adventure, that kind of thing. All of those influences kind of permeate the kind of material we produce at RAW. I love games but I don't have much time to play 'em. Even so, the opportunity to translate the Bad Planet concept to the world of video games is something I feel compelled to explore."

Players will control the Convict, described as a nearly indestructible spider-killing machine, using combo-based gameplay and an extensive grappling system. Armor, weapon, and abilities upgrades will also be featured along the way, alongside his weapon of choice: an electricity-infused hammer. 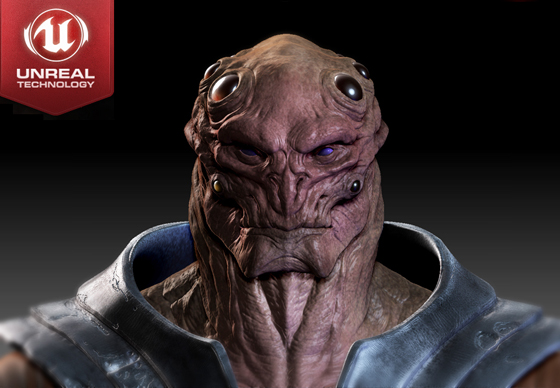 The game is being created by independent developer Red Fly Studio on Unreal Engine 3. The studio previously worked on the likes of Mushroom Men: The Spore Wars, Thor, The Force Unleashed II, and Ghostbusters.

"Our artist on the first Bad Planet series, James Daly, is a senior concept designer at High Moon/Activision," says Jane. "He knows games inside and out. He tipped us to Red Fly a few years back. Jim mentioned all this to Tim Bradstreet and Tim brought it to me. Seeing Red Fly's pedigree made us sit up and take notice and we've had a dialogue going with them ever since. These things take a while to develop. The right circumstances have to fall into place. We're over the moon that lightning finally struck."

'The artists/creators are in control, not some suit who's job is to appeal to the lowest common denominator.'

Jane looks to kickstarter as a great source for financing independent projects while maintaining creative control.

"There's no string of producing entities we have to go through to approve our ideas," he explains. "We don't get filtered, and as a result the workflow is not impeded and what we're able to deliver is 100 percent us.

"Essentially, the artists/creators are in control, not some suit whose job is to appeal to the lowest common denominator. We're continuing to see projects of all kinds and all sizes get financed with crowd-funding. Think about it, what if Ridley Scott couldn't raise the money to make a sequel to Bladerunner ... I think he could raise that money in a week with the fans backing it. That may be a crazy example but the point is, if fans want to see it, they'll pay in advance. I think crowd-funding low-budget film production could be very close to reality."

Bad Planet is set to release episodically with episodes of roughly two-to-four hours-worth of gameplay. The game will first be released on Steam, with plans for distribution on Xbox Live Arcade and PlayStation Network later on.