It's more than just guns

At a recent preview event for Borderlands 2, Gearbox Software president, Randy Pitchford, walks us through some new features which he hopes will encourage far more replayability than the original game. The first: Badass Ranks.

The original Borderlands had hundreds of challenges hidden away in the menus. For example, "Get 50 headshots with a sniper rifle" or "Set 100 enemies on fire." Completing those challenges rewarded players with nice experience bumps, helping them to level up a bit faster, but that wasn't much of incentive. This time around there's a much more compelling reason to be a completionist with your challenge list, as each one you finish earns you a Badass Rank.

"When you rank up you earn these tokens and you can spend the tokens to improve certain stats," explains Pitchford. After earning a token, you're presented with a list of about 15 stats to improve, ranging from decreased recoil or reload speed to increased elemental damage or aiming speed. Once you decide you're going to spend a token, the game will randomly select five of those stats out of the full list and you can decide which of those five you want to improve. So, for example, you could keep improving your rate of fire so long as the game keeps picking it as one of the five, but if it isn't selected, you'll have to pick another stat that fits your play-style.

If you're worried about getting a bad roll, don't be. Pitchford estimates that when you finish your first play-through of Borderlands 2, you'll have several hundred Badass Ranks. But, unlike the normal level cap, which is maxed at 50, there's no limit to the number of Badass Ranks you can earn. "There are gonna be Borderlands hobbyists that will have tens of thousands of Badass Ranks," Pitchford predicts.

While Badass Ranks seem like a good way to improve the character you're currently playing, that's just the half of it. Those stats you improve with Badass tokens don't just apply to your current character ... they apply to every single character you create. So, if you managed to spend a bunch of tokens to increase your health maximum by 20%, every character you play as will receive that 20% health boost. It's a way to encourage people to start from scratch with a new character without having them feel like they're, well, starting from scratch. (Purists will be happy to know that Badass Rank stat increases can be disabled if you'd rather play without them.) 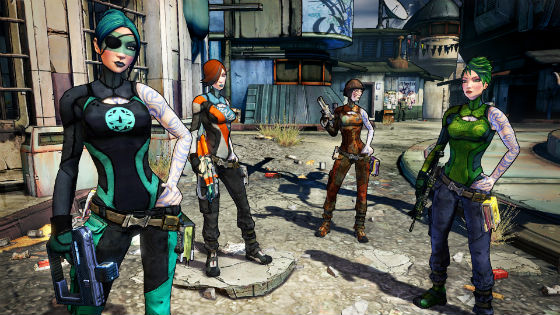 Badass Ranks will just offer statistical improvements, but Borderlands 2 also has new visual improvements for your character. The original game limited character customization to simple color schemes for your default outfit. Borderlands 2 throws in the ability to change up your head while also choosing from custom-made player skins. So, if you want your Assassin to run around with an alien head and an Metal Gear-style sneaking suit, you can do that, presuming you've unlocked both options. Skins and heads are offered as quest rewards and, occasionally, loot. You can also earn a special set of skins and heads if you've got a Borderlands 1 save file on your hard drive.

Far more challenging to earn are golden keys. Scattered throughout Borderlands 2 are golden chests which can only be opened if you've got a golden key. But you won't get keys for completing quests. Instead you have to go above and beyond. For example, showing up at a Gearbox event might net you a redeemable code to earn a key. You can also (predictably) earn one for pre-ordering the game and signing up for the Borderlands 2 Premiere Club site. But keys will be rare and once you use one, it's gone for good.

Which begs the question: What's in those chests? Pitchford is coy about answering, saving that surprise for some other time. His lack of a response seems to imply that it's not just rare loot in there that you might outgrow after leveling up a few times. Special heads or skins, perhaps? A skag pet to follow you around? Time will have to tell. 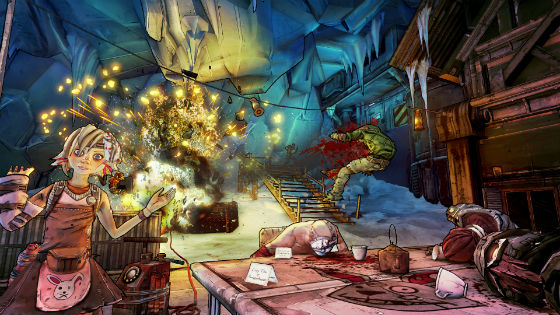 It goes without saying that, even with these additions, there's still the core Borderlands gameplay to fall back on. It's gameplay that earned plenty of fans the first time around. It's hard to imagine anyone who loved the first game being turned off by what's on display here. After all, it's more Borderlands.