The science of smells translates video game characters into scents

"We're not saying this is what Mega Man the metal robot smells like, this is a fragrance that expresses him." Jim Kavanaugh, Epic-Scents project director

Share All sharing options for: The science of smells translates video game characters into scents

The flavor and fragrance experts at Epic-Scents say they have broken down the complexities of 80s video game hero Mega Man and translated it into a scent that will remind gamers not just of the Capcom games, but of the time spent playing them.

They've spent the past 40 years breaking down familiar tastes and smells into chemical compounds; now a team of Connecticut scientists and perfumers are working to deconstruct not the crisp taste of a pear or waft of fresh cut grass in the air, but the essence of video game characters.

The flavor and fragrance experts at Epic-Scents say they have broken down the complexities of timeless video game hero Mega Man and translated him into a scent that will remind gamers not just of the Capcom games, but of the time spent playing them.

"We really want gamers to know that we are making a fragrance that is an experience of who that character is," said Jim Kavanaugh, Epic-Scents project director. "We're not saying this is what Mega Man the metal robot smells like, this is a fragrance that expresses him."

"We're not saying this is what Mega Man smells like, this is a fragrance that expresses him."

The deal includes at least two scents, one based on Mega Man and the other on Proto Man. A Capcom spokesperson told Polygon that the game developer does have some input on the scents and final approval rights.

Epic-Scents was born out of Bedoukian Research, a Connecticut-based flavor and fragrance company founded in 1972. Chemists David Bedoukian and Drew Corcoran came up with the idea of combining fragrances and video game characters last summer. The company is starting out with hanging air fresheners, but hope to eventually expand into "fine fragrances" like perfume and cologne, Kavanaugh said. The air fresheners should start hitting some stores in two to four weeks for about $3 each, with national availability this fall. 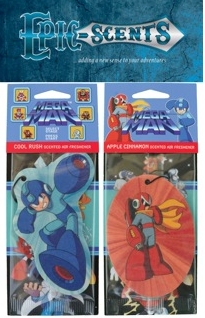 "The whole concept was video games and fragrances," he said. "It has been done in the past, but not by people with the experience. There is a lot of passion for video games here.

"When we select a character we want to select a fragrance that is an expression of that character."

Once defined, a team of chemists and perfumers worked to translate those characteristics and ideals into "notes." In the vernacular of perfuming, a fragrance is a symphony of smells composed of three sets of harmonious scents, or notes. A particular fragrance unfolds in notes, subtly changing and intertwining as a person smells it.

In the case of Mega Man, the perfumers tried to capture the essence of a boy put into a man's role.

"There is a purity in him, he has a real pure heart," Kavanaugh said, "but there is also masculinity, and bravery."

"There are strong ties between memories and fragrance,"

For the purity of heart, the perfumers went with a very fresh clear note, like a fresh tropical breeze. For Mega Man's masculine side, they introduced a musky note, to make it "closer to a men's fragrance." And finally for bravery slight citrus notes.

"Perfumers then take all of our notes and put them together into a complete fragrance that works," Kavanaugh said.

Mega Man's fragrance is called Cool Rush. Proto Man's is Apple Cinnamon, a smell that Kavanaugh says is "kind of spicy because he's a bit of a rebel."

The scents are then infused into small cut-outs of the two characters, which can be hung in cars, dorm rooms or at desks, he said.

The company is already in talks with other video game companies about producing scents for a broader variety of characters. They're also asking gamers to tell them on Facebook what sorts of characters they'd like to have scents created for.

"There are strong ties between memories and fragrance," Kavanaugh said. "We want to tie that fragrance to that character, when you use our air fresheners you will remember the nostalgia of playing that game."