Lara stumbles, falls, gets kicked and beaten, but she always gets up

Share All sharing options for: Tomb Raider connects you with Lara Croft

Crystal Dynamics' upcoming Tomb Raider reboot tells a new Lara Croft origin story. It's a harrowing tale that seeks to present the British explorer at her most vulnerable, by beating her down and finding meaning — and growth — in watching her get back up time and again.

At San Diego Comic-Con this weekend, I had the chance to play through the same half-hour demo we saw at E3, which includes the contentious sexual assault sequence that drew so much attention back then. I started in Tomb Raider's second chapter, which begins after Lara impales herself on a stalagmite while escaping from captivity in a cave. This is the making of Lara Croft, and it's not pretty.

I immediately noticed, and appreciated, the sluggish nature of Lara's movements — this is a young woman who has a fresh, bloody wound in her side. Pushing the left stick forward directed her lumbering gait, and the dodge button yielded only a hasty, on-all-fours stumble in a particular direction.

Of course, the game immediately followed in the footsteps of Uncharted — a series Tomb Raider takes many cues from — by ignoring the kind of injury that would leave a typical human gasping with every movement, and having Lara climb and leap around the island her crew is shipwrecked on. She at least took a moment to gather herself after walking across a waterfall on a narrow log.

Tomb Raider also does a good job of making you feel the same emotions that Lara is experiencing, fear in particular. By pushing the player through claustrophobic spaces — many of whose walls are lined with skulls and candles, and covered with arcane hieroglyphs — Crystal Dynamics induces a pervasive sense of foreboding, without resorting to jump scares, that leaves you cautiously creeping through the environment. Whether it's the sound of eerie music wafting from a shed, the sight of rotting animal carcasses hanging in a makeshift abattoir, or the discovery of Japanese artifacts, Tomb Raider seems designed to creep you out and make you wonder about the island's origins.

Lara Croft also faces plenty of corporeal threats. As her enemies — other men on the island whose motives are unknown — capture and pick off members of her expedition, she is left to fend for herself in the wilderness. On a few occasions, she encounters vicious wolves; unlike the deer she kills for food, she feels no qualms about putting these snarling creatures down with arrows or her knife.

The deer-hunting sequence foreshadows a later segment in which Lara attempts to flee from her captors, where circumstances force her to take a human life for the first time. After a stealth section during which Lara sneaks around with her hands still bound behind her back, the leader of the island's thugs discovers her hiding place and draws her out at gunpoint. I watched the cutscene that followed, leaving my hands slack on the controller as the unkempt man began to run his over Lara. 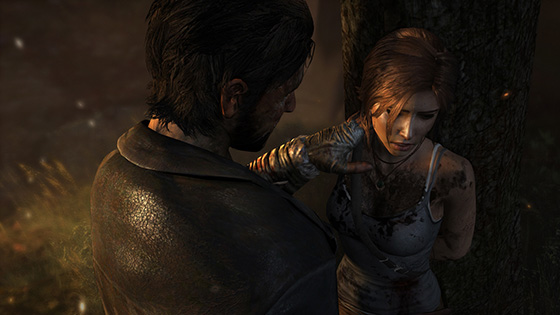 That was a mistake — first, on my part, and then, on his.

Lara kneed him in the groin, or would have if I hadn't failed the quick-time event. Because I wasn't ready, her kick missed, and I watched her slump against the wall behind her as she took a few bullets to the chest. In Tomb Raider, death is more than a mere obstacle to progress: this particular sight hurt in a sickening way, and I made sure it wouldn't come to pass again.

This time, I successfully kneed my attacker, although he quickly regained control and slammed me against the wall. Then he leaned in, and I chomped down on his ear. After a quick scuffle, I grabbed his gun and was eventually able to shoot him in the face. The life-or-death struggle and the self-defense killing left Lara sobbing hysterically, and it legitimately felt like a life-changing, character-building moment. Opinions will vary as far as Tomb Raider's use of this incident to push Lara's tale forward, but I found it effective because the arc of the chapter made me feel like the gameplay and story earned it, even in my relatively short play session.

I felt a sense of pride and accomplishment in helping Lara navigate a hostile environment, and in watching her apply her smarts in figuring out a way to survive. Just as she steeled herself for every exertion, I found myself encouraging her progress; with every blow she suffered, I winced. The harsh nature of Tomb Raider's world is what builds a connection between Lara and the player, and considering the story Crystal Dynamics and writer Rhianna Pratchett want to tell, that bond will be vital.