'Injustice: Gods Among Us' and NetherRealm's fight for balance of accessibility and pro play

Share All sharing options for: 'Injustice: Gods Among Us' and NetherRealm's fight for balance of accessibility and pro play

Ed Boon of NetherRealm Studios talks about Injustice: Gods Among Us and moving beyond Mortal Kombat.

Mortal Kombat co-creator and NetherRealm Studios creative director Ed Boon says his team's next game, the DC Universe brawler Injustice: Gods Among Us, may be its most accessible yet. But the broad appeal of NetherRealm's over-the-top fighter, which pits Superman and Batman against Harley Quinn and Solomon Grundy, won't ignore the hardcore fighting game fans that play Mortal Kombat and its ilk competitively.

"Our studio, we have big picture plans to expand into different genres," Boon told Polygon. "We wanted to make this outrageous fighting game where the events are much bigger than [Mortal Kombat] — you know, instead of swinging a sword, you swing a car." Car-swinging is a move superhumanly strong characters like Grundy and Superman can pull off, but that Batman and Flash can't.

NetherRealm's previous console fighting game, 2011's Mortal Kombat, just made its second appearance as one of the titles featured at the EVO Championship Series in Las Vegas, where the best of the best fighting game players duke it out for cash and glory. Boon says he and the team were happy to see such variety in character choice during the EVO Mortal Kombat finals, which he sees as a testament to the mechanics and balance of the game.

"One of the reasons we brought [Injustice] to EVO is that audience is certainly one we want to serve," Boon said. We definitely got good feedback. Some people were asking about the super moves: 'How long do they take to [play out]?' I don't think we're going to have them play out longer than a Marvel vs Capcom or Super Street Fighter IV [super move] or the X-rays in Mortal Kombat. Time-wise, we definitely want to keep it in the same realm of other fighting games."

Boon says Injustice will include some technical features from Mortal Kombat, including enhanced special moves and combo breakers. Breakers, Boon said, are linked to Injustice's "Clash" system, a head-to-head moment that sees both players engage in a wager of sorts, betting segments of the super meter that builds as players take and deal damage. The more meter you spend, the more damage you might inflict (or block).

"Visually we're happy with what we have," Boon says of the dramatic Clash battles, "but in terms of exactly what moments [those happen] and what the requirements are for those to happen, that's still being decided." NetherRealm has until 2013 to finalize the mechanics of its Clash system.

One concession NetherRealm might make for the EVO crowd is related to its interactive stages, unique in their ability to inflict damage on players.

"I think anytime you do something as, I guess, bold or out of the box as that, you're going to have people that question it," Boon said. "Especially, how does that come into play in a tournament situation? If you play in the Batcave, you have a different strategy than if you play in the Fortress of Solitude. My guess is we will certainly offer at least one stage that is traditional, because you never know what's going to be banned in tournaments. We're definitely aware of the EVO guys and we're going to put things in the game to accommodate them with a more stripped down version." 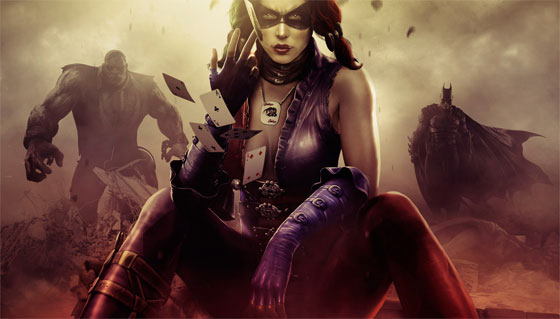 Boon also addressed plans to improve the way downloadable characters could be delivered to players in Injustice — though he did not confirm that post-release characters were in the works — a technical issue that affected last year's Mortal Kombat.

"The fundamental problem is getting the data to everybody's machine," Boon said. "I personally believe that the solution is to design a system that pushes it everyone so that it's just an update that downloads the content when a new character is available and you can't get online until you've downloaded it. I think that's a solution that could work. That's the approach I'd like to take. We just have to work out the logistics with the [platform holders]."

In the case of Injustice: Gods Among Us, that means the people behind the PlayStation 3, Xbox 360 and Wii U. We asked Boon about the Wii U version and how it might differ from its console counterparts.

"Right now, all the systems are in parity with the same feature sets," he said. "We're obviously going to have some conversation about the Wii U's unique controller and how to use it in a fighting game that's not just a gimmick. I don't want to just have a touchscreen that shows all the secret moves and you just press them to fire them off. Thankfully the game isn't out until next year, but it's certainly not something that we've cracked yet."