Sly Cooper: Thieves in Time is Sanzaru's love letter to the series

Share All sharing options for: Sly Cooper: Thieves in Time is Sanzaru's love letter to the series

"Sly Cooper: Thieves in Time" is developer Sanzaru's love letter to the series.

When Sanzaru Games approached Sucker Punch Productions with a potential demo level for a new Sly Cooper game, Sucker Punch knew the series would be in good hands.

Sucker Punch had moved on to the Infamous games, and Sanzaru – a dedicated group of Sly Cooper fans – were anxious for a new title that Sucker Punch didn't have time to make.

"When we saw their build, we were blown away," Sly Cooper producer Caley Roberts told Polygon. "They got a development kit and they built a level without any of our official assets and pitched it to us. We totally loved it." Sanzaru worked closely with Sucker Punch on the The Sly Collection, a digital remastering of the first three games, to get a feel for how to proceed with their Sly title.

Sly Cooper: Thieves in Time picks up where Sly 3 left off, but works as a standalone for series newcomers. Sly and his companions must travel back in time to prevent the thieving raccoon's history from being erased. Figures previously alluded to in the Thievius Raccoonus, the tome from which Sly learned his techniques, are brought to the foreground as players meet and learn the history of Sly's ancestors. 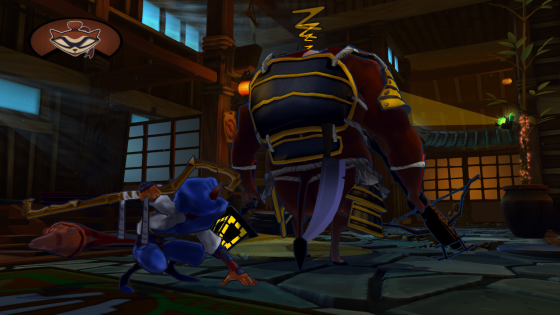 The demo I played at a Sony event this week placed me in the hooded robes of Riochi Cooper, a ninja and accomplished sushi chef in feudal Japan. Riochi had to reclaim his sushi restaurant, which had been taken over by the Shogun for serving him a bad round of sushi. The Ninja Spire and Leaping Dragon techniques – moves Sly learns in the first game that allow him to leap between and perch on points – were invented by Riochi. As the originator of these techniques, Rioichi can use them more efficiently than Sly can, moving faster and jumping across greater distances.

The same is true of each ancestor players encounter; though Sly has picked up many of his forebearers' techniques, each one retains their own move set. These moves only be accessed in full by either playing as the character or changing Sly's costume. For example, Sly can don samurai armor that will allow him to use Riochi's stronger skills, or a Robin Hood-esque archer costume that will improve his shot with a bow.

I guided Riochi past hulking guards wielding knives and lanterns. If caught in glow of a guard's lantern, players must start over from the beginning of the room. Using Riochi's iteration of Sly's signature cane, pick-pocketing the guards yielded cash and the keys to unlocking the restaurant's boiler room, where Riochi had to light a flame to restore the restaurant to order. The final room required a series of timed jumps on trampolines and across hanging lanterns without missing a beat. Failing to execute a split-second move brought Riochi crashing down on piles of plates, which would break and alert the guards to his presence. 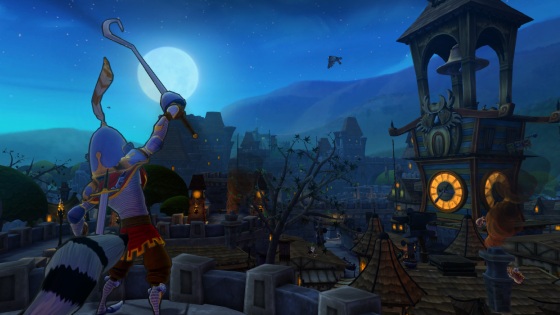 Sanzaru has taken great pains with the game's hand-drawn animations – over an hour and a half of cinematic cutscenes show every eyebrow quirk, shifting pupil, and bristled tail with intimate detail. Sanzaru has crafted a love letter to Sly Cooper, creating a game that reaches back into the series' history – quite literally – and paints a picture that shows the real breadth and depth of its lore.

"The fans for Sly Cooper have to be some of the most avid fans I've ever seen," said Roberts. "Sanzaru gets hand-written letters every week for Sly. They have an art wall for the hand-drawn art they get. These aren't emails – these are people writing, on paper, with their hands. It restored our faith in the series as something people really want."

Sly Cooper: Thieves in Time is being developed simultaneously for the PlayStation 3 and PS Vita and will feature cross-platform cloud saving, though players will need both versions of the game to utilize it. The Vita version also uses AR features in first-person view. Both versions will release later this year.