Ratchet & Clank: Full Frontal Assault takes a page out of the book of Orcs Must Die! with its foray into tower-defense play.

The PlayStation Network title features the titular characters and sometimes-ally Captain Qwark defending three of Polaris' planets from invasion by a band of mercenary aliens called the Grungarians. Players must explore areas to find weapons and ammunition to repel waves of enemies sent to attack home base.

"Full Frontal Assault is about the same size as Quest for Booty, but we feel it encourages exploration more so than any other previous Ratchet and Clank title," production director Shaun McCabe told Polygon.

A demo at a Sony event this week I found myself on the planet Ebaro, guiding Ratchet through construction of a series of traps. A wave indicator on the right side of the screen shows when enemies are approaching, how far away they are, and how fast they are moving. Ratchet – or Clank or Qwark, players can use only one at a time in campaign mode – has a familiar spread of weapons at his disposal, including his signature Omniwrench. Players must strategically place objects such as flamethrowers, bombs, and time-slowing mines in order to take out the enemy. Iconic weapons from previous games also make an appearance, such as the Groovitron – a bomb that dispels a disco ball into the air and releases a cloud of gas that causes enemies to dance uncontrollably until they drop. 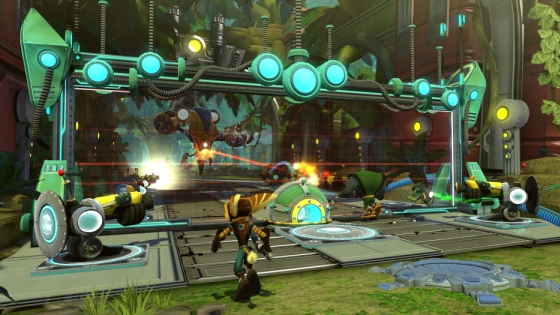 "We initially started with a wide, open battlefield in which players had to search for weapons," McCabe said. "We explored a lot of mechanics and ultimately settled on a tower defense campaign. It's absolutely part of the current trend – everyone is playing Orcs Must Die! and Dungeon Defenders."

Full Frontal Assault introduces some new goodies as well. A new Morph Mine will turn enemies into sheep when detonated. The sheep then join the fray on the player's side and shoot fire at their opponents.

Insomniac Games has also added a competitive mode, which turns the single-player campaign into a head-to-head race to defeat enemies. "We've wanted to go head-to-head again since Ratchet: Deadlocked, and we thought a tower-defense competition was a new, great way to do that," said McCabe. 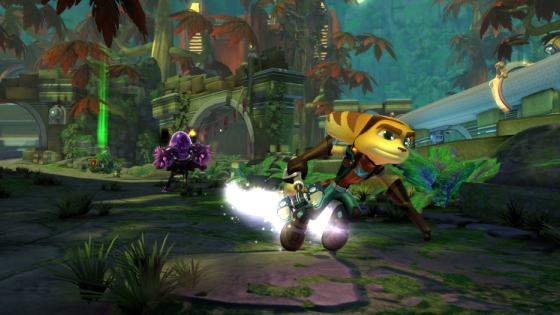 "People still want the Ratchet & Clank experience and fans love having new games, but a new game takes a long time to make," McCabe said. "We have Full Frontal coming out, which is about the size and style of Quest for Booty, but they still want the original experience." McCabe said that to the team at Insomniac, re-releasing the PlayStation 2 games in HD for PS3 – much like the treatment Jak and Daxter received later this year and Sly Cooper in 2010 – "just made sense."