The birds are back

Share All sharing options for: Gesturing through 'Angry Birds' on Samsung's Smart TV

Samsung has a new version of Angry Birds coming that's all about motion.

Yesterday, at an event in New York City, Samsung introduced its new flagship, 75-inch monster of an LCD TV, the ES9000. As part of the event, the company rolled out a version of Angry Birds which would work with Samsung's Smart Interaction gesture controls. Even though Angry Birds is coming to major consoles later this year, with Kinect and Move support, Samsung's version will actually be the first official (read: not user-modded), motion-controlled installment available, as it's launching in about a month. Which begs the question: How does it play?

Like Kinect, Samsung's Smart Interaction gesture controls rely on a camera, placed above or below the TV. Unlike Kinect, though, the camera doesn't track the entire body. Instead it's just tracking the location of your head and a raised hand next to it. Even though it's a simpler solution, I did find that moving a cursor around the screen using just my hand felt more responsive than moving a cursor with Kinect. Samsung's solution is also less demanding of space between the TV and the user. The suggested distance was at least five feet, but I found I could get even closer, to around four feet, and still control the gameplay.

Speaking of gameplay, here's how this all works with Angry Birds. If you've played the Facebook version of Rovio's game, you'll notice that this is pretty similar. You can move a cursor around the screen to view the battlefield and, when you're ready to fling your avian friend, you click and drag the cursor back to prime and aim the slingshot. Let go of the cursor and your bird will fly. Click again in mid-flight and your bird will pull off a special move (like the three-bird split of the blue bird or the explosion of the black bird). 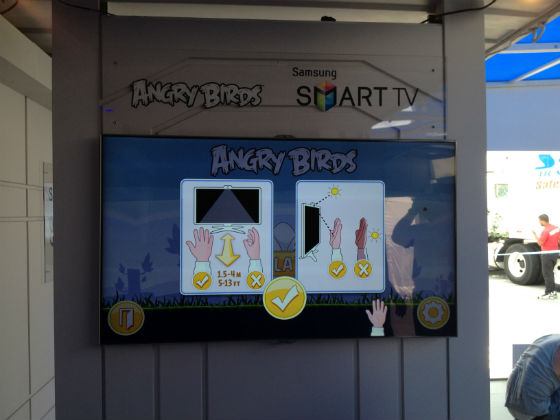 The cursor is controlled by the location of your hand, but what about the clicking? Samsung uses a simple technique to determine a "click." All you need to do is ball your hand into a fist and it's the equivalent of holding down a mouse button. Open your fist back up again and the bird flies free.

I came away pretty impressed with the accuracy of the mouse controls, which let me make minute changes to where I was aiming my bird based on subtle hand movements. The clicking system worked well, too, though I did run into some accuracy issues here and there. Samsung representatives on-hand mentioned that sunlight can mess with the tracking system and that the outdoor location of the event wasn't the most ideal setting to test the game. On the bright side, this version of Angry Birds will be free for anyone who purchases a Samsung TV with Smart Interaction built-in, so you can easily see just how well it works with your living room lighting situation.

Hardcore Angry Birds fans (which exist, right?) will probably find that will the accuracy of Samsung's motion-controlled set-up is not quite as spot-on as physical or touch controls, but for families or casual gamers just looking to kick back on the couch and bust some pigs, it's a pretty nifty extra to have built right into your TV.