'The Secret World' and the re-writes that came before it

"It's been constant pressure" Ragnar Tornquist

Share All sharing options for: 'The Secret World' and the re-writes that came before it

Creative director Ragnar Tornquist talks in-depth about how his history with film influenced the way he writes for games.

Had creative director Ragnar Tornquist — who in his own way is the Nordic response to Peter Molyneux, an ideas man who's dotted his resume with big-ideas games to varying degrees of success — continued down the road he began during his university days, he'd be in the film industry right now. Because for four years he left gaming behind him.

Twenty years ago, Tornquist was courting an interest in films and spent those four years pursuing it. "I sort of had abandoned all interest in working on games," he says. "I went to film school at NYU in the early '90s and studied production, directing, and writing for film. I was focused on film and writing which I did for many years." It's not a surprise, then, that its influence is visible in his own games.

By the mid-nineties, the fates intervened and he found himself back in Norway, not in film, but as an employee with Norwegian studio Funcom.

Now over the last 10 years, Tornquist has been doing the necessary creative aerobics to get a Neil Gaiman-styled massively multiplayer game called The Secret World off the ground. The game is based off of a few earlier designs for titles that were never brought to light. One, called Heaven & Earth, now only exists as a two-page gameplay brief that combines magic with the real world. Its other predecessor, a massively multiplayer game called Cabal was in development in the early 2000s and planned for a release on consoles. "It didn't work out," he says.

Today, at the head of a small group of Funcom writers, he is for all intents and purposes a director, using methods that wouldn't seem out of place in film and television production. And the result is a scriptwriting process that relies as much on the performers as it does the writers. 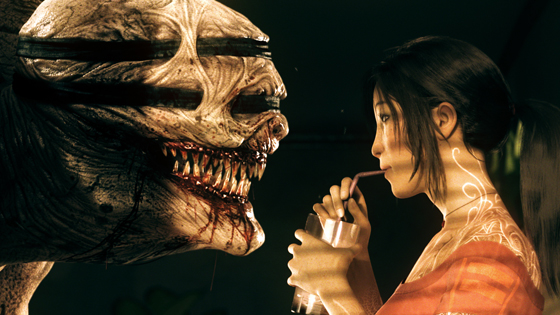 Tornquist works alongside actors. The Secret World is story-centric and includes just over 300 characters whose dialogue is coupled with cut scenes. In the studio they are performed and voiced by professional actors who he coaches, talking them through their roles. Like on a traditional set there is a natural push and pull between a script and its performer. The result, he says, is a feedback loop between the writers and their actors. Because of this, scripts change, and regularly.

"Having the right script and the right actor for the script and for them to understand it and see where it's going is integral," Tornquist said. "The Secret World is so big and so vast a lot of actors don't really get what it is. So you have to set it up for them. As briefly as you can. You have to give them a situation to respond to, whether it's being the sheriff of a police station under siege by zombies or an eternal creature who controls the destiny of humanity."

Writing for a massively multiplayer game is a multi-step process. The team writes a first draft on their own, which reaches a lead writer for review. It moves on to Tornquist, who may or may not send it back with comments. Before recording he looks over the scripts, either making alterations or re-writing them altogether, followed by a read-through about an hour before it's handed to its voice actor. During that time each piece of dialogue is spoken aloud by the developers seated together, and writing turns into dialogue which turns back into writing before it results in a cut scene. By the time it reaches the voice actor it can continue to change.

"Often times we made changes to the story in the studio based on how a certain actor reads a certain role," Tornquist explained. "We say 'this character is so interesting, is so fascinating, we really need to make it bigger.' And we start building a whole new segment of the story around that character. Or we say that character isn't working and eliminate them from the game. We've cut characters, we've re-recorded characters because voice is so important in this game.

"And sometimes it just doesn't work and we have an hour to fix it. One memorable incident writing a character called Deputy Andy, we rewrote most of it in the room while the actor was reading it. The character was great but the dialogue was shit. And now it happens to be one of the most interesting characters in the game because it just unrolled dynamically on the spot. We told the actor, 'Can you please hold on', and we sat furiously rewriting it and sending out scripts. Sometimes it's chaotic, sometimes it's touch-and-go but that ends up being some of the best dialogue in the game."

The size of games in the genre offer their own issues for the writers. Tornquist makes comparisons to television show Lost when he describes the process it takes to develop a setting built around hundreds of missions into a single cohesive mass. The secret world of The Secret World is a jigsaw puzzle where fractions of the mystery are spread out across game mechanics, mission cinematics, character dialogue, even in item descriptions. Players are expected to piece it together themselves to develop a bigger picture of the world they're involved in. It shares a few philosophical similarities with the J.J. Abrams show, he says, although the team is aware of where Abrams' island went wrong.

"They weren't afraid to give the viewers these puzzles and mysteries and not explain anything but let it gather into a bigger picture as the seasons went on. That's exactly the philosophy we have. It's going to take time to learn everything, and it's going to take time to work, and players discussing it to see the big picture but it's there. Lost did it really well at the beginning and to me it was a story that felt like a game story. But it petered out toward the end because their jigsaw puzzle wasn't that complete."

They have been up against a bigger and continued challenge, however. On this project timing is key, and at times the team has had just two days to deliver up to three, four, even five full cut scenes to hit their respective targets.

"It's been constant pressure," he says. The situation "isn't ideal" but due to the nature of ever-changing gameplay it is an inevitability.

"Sometimes missions have changed or they haven't been as strong as they needed to or there's been concerned about how the story flows in a certain area of the game. There are instances where we have until 6pm, and at 9am we have absolutely nothing and we have to sort of find it. It's hard because this game is also localized all dialogue is localized into German and French so once you write certain things down you sort of have to stick with it. And if you change it which we have done we have to do that change really quickly and really dynamically."

"It's been constant pressure"

But regardless of the pressure, he admits that films aren't in his future.

"I very quickly grew to love the idea of telling stories in that medium rather than doing it in film. Film is such a crowded medium and so much has been done. It's such an old medium. People have been telling stories in film for over a hundred years but storytelling in games is such a new thing. I realized along the way that my interest wasn't in making films, it was in telling stories that engage people.

"I'd have a really hard time writing a movie now because I think you have to compress everything," he says. "At this point I'm so attuned to writing for a story that players explore instead of something that you just sit and watch. In a game you are in control of where you take the conversation. You interact with the world and branch off into stories. That's what we do with The Secret World. We look at the world as a jigsaw puzzle."