Sony Computer Entertainment has made another key acquisition today: fighting game expert, Street Fighter master, and former Capcom employee Seth Killian, who is now a member of the PlayStation family at the company's Santa Monica Studio.

Killian will still be in the business of creating fighting games, as one of his first projects will be PlayStation All-Stars: Battle Royale, Sony and SuperBot Entertainment's crossover brawler.

His role as lead designer at Sony Santa Monica Studio's external development group will extend to more than fighting games, however. In addition to leading development on the God of War series, Sony's Santa Monica Studio also works with smaller teams like thatgamecompany, Eat Sleep Play, and Q-Games to bring their titles to PlayStation systems.

"I'm happy that I get to start with a fighting game, but yes, my assignments already include other types of games as well," Killian said via e-mail. "The External group works with Sony's outside studios, like the cool kids from thatgamecompany (Flower, Journey), Giant Sparrow (The Unfinished Swan), and of course SuperBot Entertainment (PlayStation All-Stars) just to name a few. For my projects, I'll be collaborating with the teams on the design and creative side, in planning and execution."

Killian announced he was leaving Capcom in mid-June, having worked with the development teams responsible for Street Fighter 4, Marvel vs. Capcom 3 and Street Fighter X Tekken. Killian explained in an e-mail interview what brought him to Sony's Santa Monica Studio after six years at Capcom.

"Sony Santa Monica has a great group of talent (including senior management made up mostly of women, which is unusual and awesome), and they work on some of the most interesting projects in gaming, with a range that runs from AAA to smaller, more personal games," Killian said. "I think they're the most progressive studio of their size anywhere in the world, which gives me a chance to work directly with a lot of my industry heroes.

"The studio is also infested with smart combat designers that speak my language and make me feel like less of a weirdo, so that was pretty exciting." 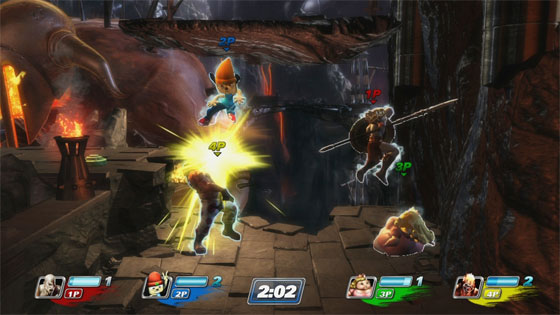 The opportunity to work with "the fighting game brain trust" developing PlayStation All-Stars, Killian says, was another reason he was attracted to the Santa Monica-based developer.

"I am intensely interested in balance," Killian said, "but to do it right means taking time to try and understand not just a few characters, but the whole ecosystem of All-Stars, which takes some time. That said, the target is definitely to make it withstand and even shine under serious competitive pressure. It's a fun game that you can just mash around in with friends, but the SuperBot team includes a lot of stone-cold fighting game killers who want to build something they enjoy too, and you only have to look around the office to find them all playing for fun and smiling."

"I will be playing as much of the multiplayer as I can manage," Killian said, "and whether I end up stealing from them, or maybe they'll find an idea from me, either way my hope is that all the games become as strong as they can be."

A longtime fighting game fan and evangelist, Killian joined Capcom in 2006 to consult and collaborate on the development of Street Fighter 4, the beginning of a revival of the then-struggling fighting game genre.

"My job at Capcom started weird and got progressively weirder," Killian explained. "I was always supported with input into the games, but I realized at one point that of all the job titles I accrued over the years (when I left I was 'Strategic Director, Community, Online, and Special Combat Advisor'), none of them even existed before they were given to me – they were making it up as they were going along, just like I was.

"Everybody was happy with what I was doing, but they also recognized that it didn't fit into the organizational structure at all. Towards the end, I was working on the fighting games as well as titles outside the fighting genre, but also still working on explicitly community side things."

Killian's new gig at Santa Monica Studio will see him focus mainly on development, not marketing.

"At Sony, the lead game designer role is very much a full time job unto itself," he says. "I'm not formally responsible for community outreach any longer (PlayStation and Santa Monica both have great teams for that), but fans have always been centrally important in my thinking and approach to pretty much everything, so those distinctions aren't very important to me. I'll talk to whoever is willing to listen, and listen to whoever has something worthwhile to tell me, whether they are other designers, smart fans, or tough critics."

"That's a dangerous time for the genre, because it risks collapsing under its own weight"

His departure from Capcom, Killian says, does not necessarily signal his departure from the fighting game community, a group of dedicated fans that he considers his "extended family." After six years of focusing on Capcom's suite of fighting games, sequels and iterations delivered worryingly too frequent for some, Killian remains upbeat about the future of the genre.

"I think it's a very interesting time [for fighting games]," Killian says. "The market is crowded – not because there [are] so many fighters relative to other games, but because most fighters tend to require such a large time investment from their players. If the games are very hard to learn, but also need that time investment to shine, they have to compete with each other or even cannibalize their own player bases from previous installments. That fragments the player base across titles, and the fewer players playing any particular game mean that your skills (that investment) are less admired or valuable. That's a dangerous time for the genre, because it risks collapsing under its own weight – if you're the best at something nobody really plays, why bother?"

"All-Stars is a real wild-card in my opinion, which is part of why I wanted to work on it," Killian continues. "It ignores a lot of conventional thinking about fighters, both in terms of how you win (no lifebars, only supers kill, regular moves build super meter) and in terms of execution. There are some tricky styles of play, but none of the moves are hard to do at all (button, or button + direction), so you can get the basic elements very quickly and dive into strategy much faster than you could in a traditional fighter.

"Taking what people think of as a 'fun' or 'party' genre and sticking a bunch of extremely technical and smart players on the project has this amazing result – a game on very serious underpinnings with a zany fan-service wrapper. It ends up being something total noobs can have fun with while also rewarding smart players and clever mind reading. The noob won't beat the good player, but the weirdest thing about All-Stars is that I have fun even when I'm getting owned. Usually when I get creamed in a fighter, I get kind of depressed, or feel helpless, or maybe even angry.

"In All-Stars, for some reason, I'm left smiling and curious, with the urge to play just *one* more game. Maybe it's just PaRappa, but I think they're really on to something."