Epic Games' Fortnite is for friends, modders, scavengers, white mages and everyone else

Share All sharing options for: Epic Games' Fortnite is for friends, modders, scavengers, white mages and everyone else

Cliff Bleszinski and Tanya Jessen revealed important new details about Epic Games' Fortnite at Comic-Con last week. It's running on Unreal Engine 4. It's PC exclusive (for now). It's a game about building, combat, character customization, and social interaction. It's going to continuously evolve as a game in which players can scavenge, loot, and build during the day, then battle zombie-like creatures when night falls.

Fortnite is a game designed not just for the player who thrills at curbstomping, headshotting and chainsawing Locust hordes, its creators say. It's a game designed for the crowd that might want to build a really sweet, nigh-impenetrable house or spend all day gathering supplies.

Its creators hope that Fortnite will encourage people who identify the company only with Gears of War and Unreal — not Jazz Jackrabbit or Jill of the Jungle — to see what else Epic is capable of.

"Nighttime will be scary, but during the day it feels kind of like an amusement park ride you can get off and explore."

"When Fortnite's ideas were pitched originally, there was a lot of thinking about the future of games and where things were moving," says Fortnite producer Tanya Jessen. "Cliff was really into the idea of having more dynamic worlds where you can craft and build. And I was thinking, 'I love playing co-op games with my friends' but they have a 'That's a shooter! I can't play that!' attitude."

"There should be ways to get those [types of] people playing together," says Jessen, who identifies herself as a "support character player."

"I'm an ADD gamer," says Bleszinski. "One minute I'll collect and scavenge and explore. The next minute I'll want to crush whatever's in front of me. We've got the killing thing down at Epic. We know how to kill bad guys. If you want that, that's still in this game. But opening this up to wider audiences is really exciting."

"There is some risk involved to the scavenging right now in the current design," Bleszinski let slip during our interview. "Depending on how you break down a wall, you might break down a wall and find something behind it." After revealing that gameplay tidbit, Epic reps cut him off. 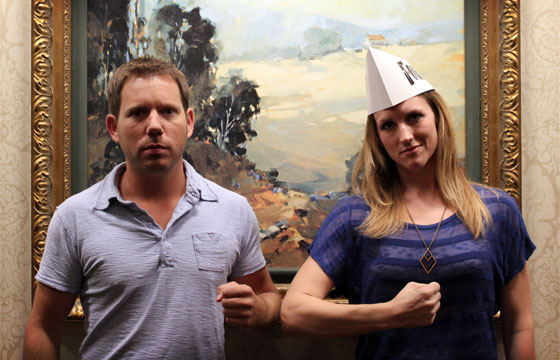 Bleszinski stresses that there's "not just one way to play" Fortnite and that, if you're smart, "you could play this game without ever getting attacked."

"There may or may not be [player classes]," he says, just one of many design decisions that appears to be still under discussion. "We just haven't confirmed anything like that. We're still figuring all that out. I will tell you the game will adhere to my mantra of 'play your way.'

"I've been banging that drum on all of our products. There's not just one way to play it, which internally sometimes we struggle with. 'Are we a shooter? An RPG? A building game?' We can be all of that."

"We're walking a fine line with humor and tone as well. We want to have fun with this. We want to put zany things that fit within the world."

Fortnite has been pitched multiple times at Epic Games, Bleszinski said. It was the word "zombies" that got it shut down previously, he says, citing walking undead fatigue. Eventually, Epic designers found their own twist on the shuffling endless hordes. Bleszinski won't say what Fornite's purplish antagonists are just yet.

"They're zombie-like, but they're not actually zombies," he says. Three types of enemy have been confirmed: The brutish, heavy-handed Smasher, the human-skin wearing Husk, and the Troll, which Bleszinski describes as "Beavis-like" and "therapy for spending time on the Internet."

"We're intentionally keeping a lot of it vague on purpose," Bleszinski says of Fortnite's story and its mysterious enemies. "What we're hoping is that we have a lot of in-world storytelling that people can piece together and solve these mysteries. Now we're in a world of wikis, YouTube and forums where, if we leave the pieces of the puzzle out there, the collective hivemind of the Internet will put it together." 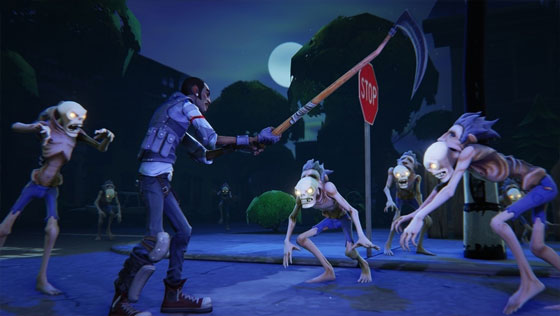 Fortnite began as an Unreal Engine 3 game before Epic shifted development to its next-gen successor, Unreal Engine 4. The change made Fortnite "pop" visually, Bleszinski said, and made tweaking the game's systems via its scripting language, Blueprint, easier for artists and designers.

"The best way to get an engine up to snuff is to ship a product on it," Bleszinski said of the switch. "It's in our best interests to us and our licensees to make this game shine and get it out the door in a reasonable timeframe so people have access to the tools."

"Fortnite morphed into this longterm thing that we're going to be investing in for years," Jessen added. "Why would we do that in UE3 when we're making this big push for UE4? Fortnite's a very systems driven game, meaning that we've got all this gameplay and fun stuff that can take advantage of the UE4 tech."

"I'm absolutely salivating to see what the mod community does with this game," Bleszinski said.

The creators of Fortnite said they'll be delivering continuous updates, growing the game's systems over time, one of the reasons the game is currently PC-only. "That's not to rule out that we could do it for other platforms," was careful to add.

Jessen says it will be 2013 before the public gets its eyes on Fortnite, when a beta is expected to roll out that will give players "VIP access to help design the product."

Beyond that, Epic is sticking to a "When it's done it's done" release plan.