ZombiU multiplayer is a strategic showcase for the Wii U

"You can lose your humanity in an instant" Loic Gounon, Ubisoft

Share All sharing options for: ZombiU multiplayer is a strategic showcase for the Wii U

Ubisoft's ZombiU is one of the standout titles of the Wii U's lineup so far, and a recent hands-on demo of its asymmetric local multiplayer mode exhibited the smartest use of the console's capabilities Polygon has seen yet.

ZombiU offers a relatively serious and "realistic" zombie fiction, if that makes sense — it's about using the limited resources at hand to survive in a brutal world, with an atmosphere that's more The Walking Dead than Dead Rising. In that vein, one of its multiplayer modes pits a lone survivor against a zombie boss controlling a variety of the undead.

It's a capture point setup, with the survivor defending his home turf — in the case of the map we played, London rooftops — against the encroaching zombie horde. Three flags are located in the area, and the first side to reach four captures wins the game. 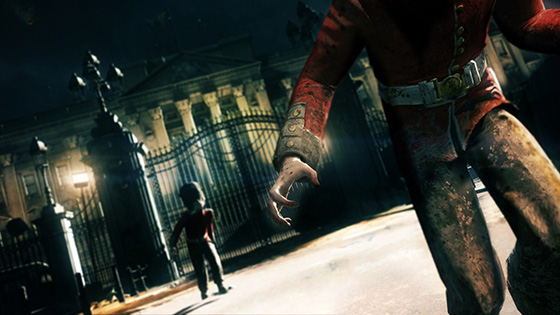 The human plays a zombie-killing FPS on the television, with personal weapons at his disposal including a pistol, shotgun, and crossbow. Strangely, he has to manually reload at all times, even after emptying his clip. (We lost track of the number of times where we forgot to reload and nearly got jumped by a zombie after dry-firing.) He can also find special treats in boxes scattered around the map, such as a turret, mines, and bear traps. Of course, he'll need all the help he can get in order to survive, let alone win.

The zombies that the survivor is attempting to kill are spawned by his opponent, who plays on the Wii U GamePad. It provides a top-down view of the map, giving the undead leader the opportunity to spawn up to 10 zombies anywhere except within the vicinity of the survivor. ZombiU offers varying types of infected: one who heads for the nearest flag; another who just hangs around; two attackers; and a spitter. It's "tower attack," if you will, as opposed to tower defense.

Balance is key in a one-versus-10 mode, and ZombiU's multiplayer designers appear to be on the right track. Capture bars fill up more quickly for the survivor than for zombies, and since the undead boss can't spawn zombies right next to the human, he can stand near a flag and pick off infected as they come his way (or watch as they head for the other flags). But as in the single-player game, one bite means death; once a zombie grabs the survivor, only a vial of antiviral serum will save him from being zombified himself.

This is a much more strategic mode than the ones in traditional survival horror games, where players merely slay hordes of undead. As the human, we sprinted around the map from flag to flag, fending off zombies along the way and scrounging for ammo as much as possible. As the zombie boss, we micromanaged our gang, constantly rearranging and switching out our infected to maximize our chances of dining on fresh brains. And thanks to the Wii U's setup, the GamePad player gets a nice bonus: he can set up his minions around the map, and then look up at the TV to watch them wreak havoc on his opponent.

In fact, that's why Ubisoft Montpellier is restricting this mode to local multiplayer: it's much more fun and engaging when both players are in the same room, with trash talk flying back and forth between them. That's how we played it, and it worked out — we won as both the survivor and as the zombies, which was encouraging from a balance standpoint. It looks like the human race has a fighting chance against the undead horde.

ZombiU is slated to launch with the Wii U this fall.