'Rabbids Land' is built-to-order for the Wii U GamePad

Share All sharing options for: 'Rabbids Land' is built-to-order for the Wii U GamePad

"Rabbids Land" makes smart use of the Wii U GamePad.

Rabbids Land, the latest installment in Ubisoft's Raving Rabbids series, is coming to Wii U alongside the console's launch this fall. This time the Rabbids take over an amusement park, infusing its attractions with their particular brand of slightly-inappropriate craziness.

Rabbids Land is a party game similar to Mario Party in which players move around a board with each space representing a certain consequence. More often than not these consequences involve mandatory participation in minigames. Win enough of these mini-games, and you win the game. Players compete in a trophy race, with the number of trophies needed to win the main game dependent on its selected duration.

Up to four players – or eight playing turn-based games – can participate in cooperative or competitive play, with one using the Wii U GamePad controller while the rest use Wiimotes. The player on the GamePad will have a completely different experience from those using Wiimotes; the tablet's screen will show a different perspective than what is displayed on the television. The GamePad player can either serve as the team leader or compete against the other players.

Earlier this week I went hands-on with a few of the Rabbids Land minigames. The first took place on an oval-shaped board that looked a dungeon out of Indiana Jones. Using the GamePad, I controlled three Rabbids rolling on small boulders around the board collecting green gems. Another player on a Wiimote took charge of a Rabbid on a larger boulder that moved more slowly but had the ability to crush my Rabbids. My tablet showed a top-down view of the board while the television display showed it at a roughly 45-degree angle. I had to collect ten gems before my Rabbids were squished by the other player's boulder, smashed against it in a splattering of blood. 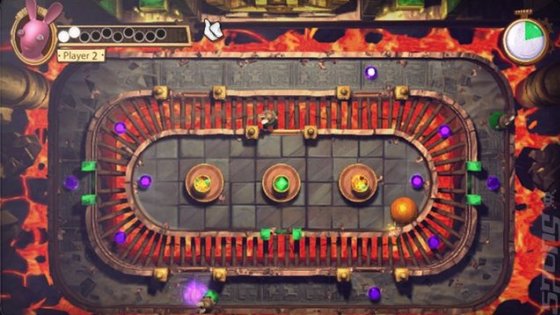 In the second minigame, eight Rabbids lined up on screen in two rows of four, dressed to the nines in fancy medieval garb. The player on the GamePad had a rear view of the Rabbids, while the player using a Wiimote saw their front sides on the television. Both players had to lift up the Rabbids' skirts and find two with matching symbols on their body. A certain number of pairs had to be found within a time limit in order to win the game.

Rabbids Land has some cute minigame concepts, but where it really shines is in use of the Wii U's GamePad. Over the course of the demo I found myself flipping the tablet in all directions, tilting, swiping with my fingers, and using its stylus. It's clear the minigames were build around the device, and Ubisoft has left no stone unturned in that regard.