"I never thought life could be so much crazier than the games I played." Justin Amirkhani

Share All sharing options for: An unplugged gamer's cross-country pilgrimage

Somewhere between the fist fight in a seedy Tucson bar and the wild midnight ride through Austin with a prostitute and her gun-toting john, Justin Amirkhani had what some might call an epiphany.

On the first day of June, a bit more than two weeks before his 24th birthday, Amirkhani packed up his belongings, sublet his Toronto apartment, and set off on what was to be a two-month-long ramble around the United States. The idea for the trip was to travel by Greyhound bus from city to city, visiting video game developers big and small at their studios to talk about the craft of making games.

But over the course of two months of backpacking through California, Arizona, Texas, Georgia, North Carolina, Maryland, and New York, the trip somehow became something more than a journey ping-ponging between game studios, closer perhaps to a game-fueled version of On the Road.

That epiphanous moment when Amirkhani realized his trip had become about something much larger than gaming hit him in a flash, much like the initial idea for the Gamer Unplugged project.

Standing amidst the cluster of fellow video game journalists during a showcase of upcoming PlayStation games in Hollywood, Canadian Amirkhani let his mind wander, thinking about how much he loved to travel and write. He started talking about the idea, and someone mentioned that Greyhound sells a pass that grants its owner unlimited travel for a month.

Two weeks later, Amirkhani wrote on his blog about this decision to drop everything and start off on a journey criss-crossing the United States to visit and interview developers.

"I've never done anything like this, and I don't know how it's going to turn out," he wrote on Facebook the day he announced the idea. "For all I know, the hardships of the trail could be too much for me and I'll wind up weary and longing for my own bed, but there's no way I'm not going to try. There are too many stories waiting to be told, too many people waiting to be met, and too many sights waiting to be seen for me to chicken out. With the support of my friends peppered across the country, my family back home, and all the people who follow my journey along the way, I know I'll be able to pull through."

The week before he set off on his trip, Amirkhani spent the week hanging out in the family cabin with his parents, getting his mom used to the idea of his traveling off the grid, by bus, with his only possessions stuffed into a bag.

Amirkhani said packing up the possessions of his life was much easier.

He listed his apartment on Craigslist, packed up the few things he couldn't bear to part with and took them to his parents' place, gave some things to friends, and left the rest in his apartment.

I ran into Amirkhani, a tall, slightly muscular guy with a tired smile, at a recent event in New York for another batch of upcoming PlayStation games. Backpack affixed to his shoulders, Amirkhani roamed between the games being demonstrated in the posh fifth-floor event center in Chelsea. We chatted briefly before I headed out for the night. 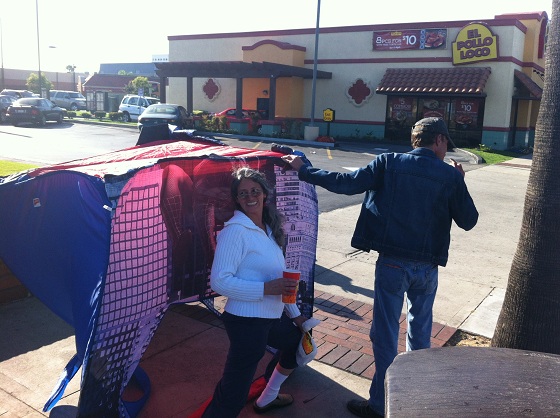 Later that week I caught up with Amirkhani by phone. He was in Schenectady, New York, about four hours north of Manhattan, staying with Ska Studios, a husband and wife team who work together on games out of their home.

Amirkhani said he spends most of his time scheduling out his trips, writing and surviving.

The trip is financed entirely by readers who donate money in exchange for a postcard, a letter from the road, or simply because they want to help fuel the Gamer Unplugged trip. Amirkhani is painfully aware of the money he spends, and he's careful not to waste it.

He spends most nights sleeping on a bus as it chugs its way from one developer city to the next. He finds places to shower, to sit and write, to recharge himself and his few electronics.

"I very rarely sleep in a bed," he told me. "I've only paid to sleep somewhere once. Once I slept outside on the street. That was in Tucson. I woke up to a timid bus driver kicking my shoes."

His meals often come from cheap grocery store purchases, like a loaf of bread and a jar of peanut butter.

"There has been days where I thought, ‘What in the hell have I gotten myself into?'"

When he left, Amirkhani carefully selected what to bring with him. He wanted only the essentials. That included clothing, a sturdy backpack, a laptop and Internet hotspot for getting online. There was a small portable charger for his phone comprised of batteries and an Altoids mint tin, made by his brother. He also brought a Nintendo 3DS and Playstation Vita and enough games to occupy his time during all of those long drives.

But he hasn't touched either portable.

"Games haven't really been a big part of the trip," Amirkhani said. "If I'm not scrambling to find a place to sleep or food, I'm probably writing stories or letters or postcards to my backers ... or sleeping."

The trip, while sometimes dangerous, or at least unsettling, has for the most part been a overwhelmingly positive experience, Amirkhani said. Though early on, the gaming backpacker almost gave up on his journey.

It was in Detroit, the longest day of Amirkhani's trip, where his dreams almost died.

In less than 24 hours in the Motor City, Amirkhani was beset by junkies and bus riots, a meth-smoking fingerless vet and a delayed departure.

"There has been days where I thought, ‘What in the hell have I gotten myself into?'," he said. Detroit "was the biggest point of self-doubt, but it wasn't the most tired or the most danger I have been in."

And for every negative experience Amirkhani tells me about there seems to be two or three positive ones. Like the one in Chicago, the day after his night in Detroit. Amirkhani said he ran into an older woman at some greasy spoon and they got to talking. She ended up paying for his breakfast and giving him her number.

"She said if I'm ever in trouble to let her know," he said. "It reaffirmed the natural goodness in people. As long as there are good people out there, I can't give up."

While Amirkhani still travels and writes on his blog nearly daily, it's no longer always about video games or those trip-defining studio visits. Increasingly he finds himself splitting his writing between his life adventures and his trips to studios. 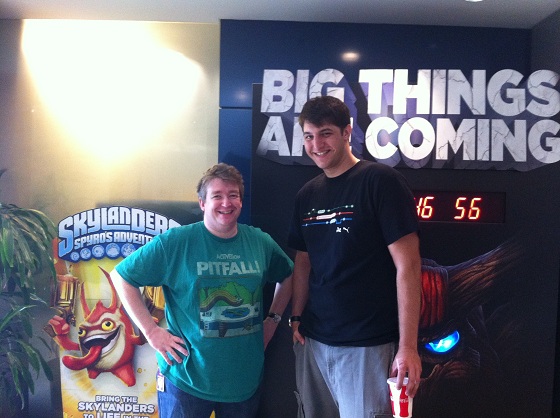 "I think it's coming out of an evolution of my own mindset," he said. "We can get so focused on this (video game) echo chamber. At the end of the day it puts into perspective how little an impact that has on life. I still love games, I love talking to people about games, but this adventure has tempered that."

What was meant to be a two month trip now looks like it could become a half year one. What started as a journey about video games, is now more a journey about real life. Though Amirkhani is hesitant to draw a distinction between the two.

"Fact is stranger than fiction," he told me. "I never thought life could be so much crazier than the games I played but that's kind of what it is.

"On the one hand games are still the driving force behind this. If I didn't have those destinations and people to talk to I don't know if I would still be doing it. But on the other hand it's become a lot more."