We have bad news about your favorite game

Time can be cruel

Share All sharing options for: We have bad news about your favorite game

With Spy vs. Spy releasing iOS, a realization is made that time can be cruel and honest.

People often ask me what my favorite game of all time is. It's a sort of test fellow enthusiasts have to judge my authority to write about these things. I don't have a favorite, but I do have a bench of beloved games from which I rotate my number one. Just Cause 2 is a favorite recent game. Earthbound and Little Nemo are cherished relics of my childhood. But if I'm feeling particularly retro, I'll name drop Spy vs. Spy for the Commodore 64, one of the first games I ever played. I love Spy vs. Spy. At least, I thought I did.

This week, Spy vs. Spy, my purportedly favorite game-depending when you asked me-was released on the iOS App Store. I had been counting down to the precise release hour: 11 PM EST, Wednesday, July 25. You can't tear the wrapper off a digital game, but I did the modern equivalent, jabbing my finger at the purchase button, fumbling to enter my App Store password, angrily cursing my internet for making the download feel like forever.

While waiting, I considered how funny my fandom was. I'd become accustomed to putting a game I'd last played at the age of four on the highest possible mantle. This game, I'd told people, is my favorite ever, knowing full well they would use my superlative like a strip of litmus paper, dipping it into the pool of opinion sloshing around their head, and determining if they found me smart, stupid or somewhere inbetween. 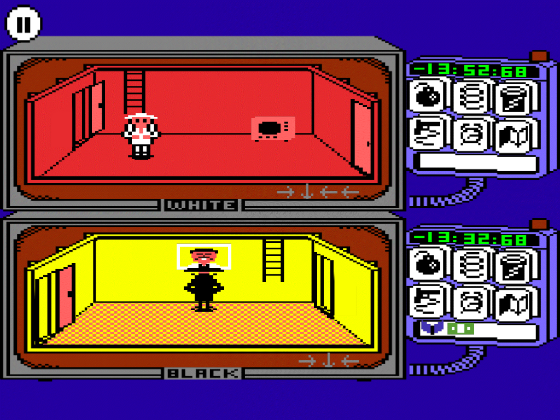 Spy vs. Spy always rated "smart" amongst those seemingly in the know. It was a safe answer.

By midnight, I was into the tutorial of Spy vs. Spy on my iPad. I couldn't imagine needing the tutorial, but it turns out I did. The game is so complex that I am genuinely impressed four-year-old me had the patience to play it. (Note: He wasn't so good at staying in one place).

The goal is for your chosen spy to collect four special items hidden in the furniture throughout a maze of nearly identical looking rooms. This furniture may be boobytrapped by yourself or your adversary, who can be seen going about his business on the lower half of the screen. Ideally, you will move quickly, collecting items, and setting traps, all the while watching your opponent, stealing items he finds, and diffusing the traps he sets, until you have a full set of the four items, allowing you to make your escape.

After a few stages, I had a headache. Was this the beige room where I'd set the bomb? Or was it one of the other four beige rooms? And where had I last seen my rival set a trap? Wait a second, the menu said I possessed the secret dossier, but I wasn't actually carrying it... so where had I left it?

Spy vs. Spy is dense, both in the strategic sense and in the "where am I and what the hell am I doing" sense. None of the strategy feels especially balanced. Not that it matters. Strategy goes out the window if both spies enter the same room. Like a Roman Emperor, the game strips both mens' belongings, forcing them to battle to the death for the spoils. By battle to the death I mean see who can tap the screen the fastest.

Defeated, I slept on it. 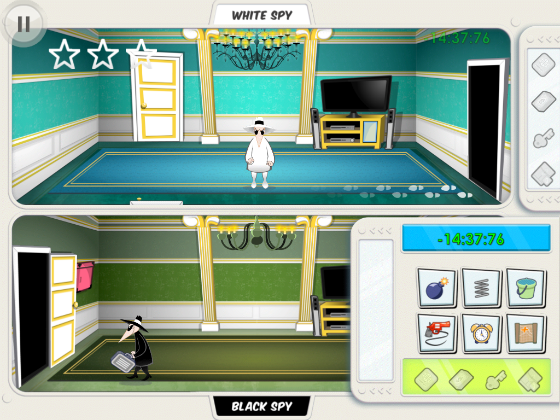 In the morning, I muscled through a few more stages, before returning to the tutorial thinking I had missed something. The fun part was somewhere, hidden in a bureau like one of the items, I just had to find it.

This is what happens when you delude yourself for two decades. You scramble to find one scrap of evidence that justifies your behavior. This game is the best game ever! At least, I thought it was and if you'll just let me show you this one thing, you'll see why. I never found that thing.

The remake includes a version of the original, the same grimy graphics and soundtrack as I'd played in 1989. The old and new games are nearly identical in play, as if to say, look, we gave you exactly what you asked for. Are you not satisfied?

In fact, the update tries to improve upon the original, and in some ways does. Tasks are easier: opening doors, setting traps, navigating the map. There are considerably more levels and and the cartoony animated graphics look great. A real step up.

The problem isn't the port. The problem is Spy vs. Spy isn't my favorite game any more. Time has scarred my beloved. What was once unique is now underwhelming, confusing, and irritating.

I wouldn't be here without Spy vs. Spy. Now if you don't mind, I'd like to never play it again.So why can't I let it go? I loved Spy vs. Spy. It was my favorite game, because at the time, there was nothing else like it. And who knows how the world would have gone had Spy vs. Spy simply never been. I can't help but think games wouldn't be quite the same. That Spy vs. Spy made a positive impact. At least it did on me.

I wouldn't be here without Spy vs. Spy. Now if you don't mind, I'd like to never play it again.