Share All sharing options for: Iocaine Studios' 'Steam Bandits: Outpost' is a 'pay-to-style' game, not pay-to-play

Jason Fader, founder and president of Iocaine Studios, brought the company back from hibernation in order to make a Kickstarted casual, free-to-play town-building game when he was laid off from Obsidian Entertainment in March.

Jason Fader enjoys playing all kinds of games, including town-building experiences like the Harvest Moon and Animal Crossing titles. That genre has enjoyed massive popularity on Facebook in titles such Zynga's Ville games and Electronic Arts' SimCity Social.

However, Fader is tired of those "energy"-based casual games, the ones that make players spam their friends or spend money in order to progress. "It annoys me to no end," he told Polygon over email. "It's 'business-driven design' and it needs stop." Fader doesn't want to see casual games "[turn] into a series of annoying posts that you ignore on Facebook," because the Ville phenomenon is "changing the perception of what casual means to people" — and not in a good way.

So in order to help save casual games, he and his company, Iocaine Studios, are currently working on their own town-building game, one that invites players in rather than lock them out. They just began a Kickstarter drive for their game, Steam Bandits: Outpost, today. It's been a long ride, and it's only likely to get more bumpy.

Fader has 12 years of game development experience. He founded Iocaine Studios in 2003; the developer released its only game to date, ThreadSpace: Hyperbol, in 2007. Unfortunately, it didn't sell very well, and when the team members went their separate ways in 2009, Fader was forced to "kind of let the company hibernate." He returned to Obsidian Entertainment to work as a producer on Fallout: New Vegas, with no plans to reactivate Iocaine.

But layoffs hit Obsidian this March, and Fader was let go along with about 40 co-workers when the studio canceled its "North Carolina" project, which had been in development for next-generation consoles. At that point, he began thinking about the games he'd always wanted to make, and Steam Bandits came up because it was a casual experience. "I just don’t have the kind of time to commit to a super long campaign of [Civilization], as much as I would love to," he told Polygon.

Instead, Fader explained, he wanted to make a game with "simple mechanics, but deep strategies" that he could "pick up for 5-10 minutes, feel like I’ve done something meaningful, and put it down for a bit." He "quickly threw out" the pay-to-play model that's so prevalent on Facebook, but retained the elements of those experiences that he enjoyed because they were "reminiscent of old-school games": harvesting resources to erect structures and continually upgrade them.

Fader also wanted to find a home for his laid-off colleagues. "Most of the senior guys got jobs pretty quickly at other places," he told Polygon, "but some of the junior and mid-range [New Vegas developers] had a harder time." Many of the employees Obsidian let go are female, and Fader remarked that while "we're all game developers in my eyes," he remains astounded by the difficulties women face in getting jobs as developers.

One month ago, Iocaine was reborn, mostly because "it was easier to use [the] old studio's paperwork instead of forming a brand new one." Fader assembled a team that includes about 10 former Obsidian employees, some of whom are working part-time for Iocaine until the Steam Bandits Kickstarter hopefully gets funded.

Steam Bandits is a town-building title with a chibi-steampunk aesthetic, a cutesy style that came about because the majority of the Iocaine staff agreed on it. "I see the people on my team as equals," said Fader, "so the art is more about what the collective team wants to do." Fader, who is serving as creative director on Steam Bandits, added, "Most of the people on the team were tired of working on hyper-real and gritty games," so they decided to go for something "more stylized" and "cartoony" in the vein of Supergiant Games' Bastion. "Our goal is to breathe life and style into a game genre that often seems to lack both of these qualities altogether," said art director Lindsey Laney in the video on the project's Kickstarter page.

The world of Steam Bandits contains three floating continents, interspersed with mostly uninhabited islands where the player can establish an outpost after customizing his or her appearance. Resources are harvested in order to construct buildings, which generate more resources and can also be decorated with in-game items. Eventually, players can hire airship captains and send them on resource-gathering missions. Multiplayer gameplay is planned as well: players' captains can fight each other in arena duels, and friends can team up for cooperative missions. Players will also be able to buy pets in order to make their outpost seem more like a lived-in town.

Iocaine's business model takes after titles such as League of Legends, Team Fortress 2, and Tribes: Ascend, in that the entire game is free to play; Fader refers to the model as "pay-to-style" instead of "pay-to-play." Steam Bandits players accrue in-game currency called "Iocaine Points," which can only be spent on pets or customizations for characters and objects. Those points can be purchased with real money, but Fader said "absolutely nothing" in the game is locked behind a paywall; anyone who keeps playing will eventually be able to access all the available content. "No matter what you're doing in the game," he promised in the Kickstarter video, "there will never be a situation where you need to pester your friends or drop in real money in order to continue playing." 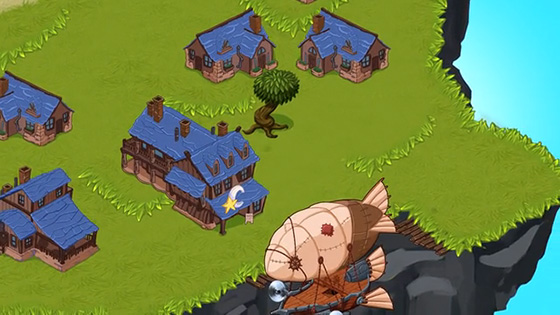 Iocaine is developing Steam Bandits on the Unity engine for PC, Mac, iOS, and Android; a working prototype is already up and running. The iOS and Android versions will differ from the PC/Mac game only in their touch-centric interface; otherwise, said Fader, "It will be as close to identical as we can make it." He would eventually like to put the game on Facebook, but said the team is focusing on the PC/Mac and mobile versions for now.

The Kickstarter page is asking for $30,000, a paltry sum in game development. If the drive gets funded, Iocaine is committed to developing the game at its most basic level: one of the three continents (Midlands), and a few different types of outfits, pets, captains, and airships. Stretch goals are set at $50,000 and $90,000, points at which Iocaine would be able to add the Southlands and Northlands continents, respectively, and ramp up the variety of in-game objects.

Fader has been so busy trying to get the Kickstarter page ready that he hasn't even gotten around to updating the old Iocaine website with Steam Bandits; instead, information is available on the game's own site. "We had to get the Kickstarter up as quickly as possible since a lot of the team is still unemployed," he told Polygon.

"We're a team that has worked on some great games and we want to apply that experience towards making a fun game that doesn't gouge the player's wallet," he wrote. "Remember games like Puzzle Quest and Animal Crossing? Those are casual games that I respect a great deal. We need more games like that and less of the other kind." With help from Kickstarter funding, he hopes to make one of the former, not the latter.