Share All sharing options for: 'Jack Houston and the Necronauts' offers a hopeful sci-fi future envisioned by the 1950s

A developer is going against the grain to create a science fiction adventure inspired by the futrue as envisioned by authors of the 1950s.

On the surface, it looks like it should not work. It's a science fiction game that's set in an alternate 1999 without the cryogenic chambers of the Alien world, without the sleek CG of Mass Effect, and without the sense of realism we've come to expect of space travel adventures. The whole game is stop motion animated using sculpted figures and matte paintings for backgrounds instead of advanced cell shading technology. And it's not about the end of the world or humanity's imminent demise.

On the surface, Stacy Davidson of Warbird Games' science fiction adventure, Jack Houston and the Necronauts, should not pique the interest of an audience that is accustomed to playing super sleek games set in the distant future. But despite Jack Houston going against the grain of what every science fiction game before it has done, Stacy Davidson is determined – certain, even – that it will work.

"And when it comes to science fiction games, they're either very realistic like The Dig where you have astronauts, or they're very much Star Wars kinds of worlds or Mass Effect where you have ultra cool, ultra sleek, futuristic worlds. There's one science fiction environment that I don't think has ever really been given its fair shake in pop culture, and that's the 1950s bubble helmet, ray guns and rockets kind of world," he says.

"We still thought that by 1999 ... we'd have a big space station where lots of people would live and eat McDonalds."

"It's something that artists illustrated a lot back in the 50s; you'd see it on the cover of books and magazines, but whenever anyone tried to make a movie in that universe, there was never the budget to put that kind of thing on screen properly, and since then no one has really tried it in the modern day."

Davidson isn't afraid to try things that haven't been proven by others. Back in 2010 he gained attention for recreating a Star Wars scene – the iconic scene where Han Solo shoots Greedo – in an adventure game engine. Since showing that scene in a Star Wars Uncut project, Davidson has been working on a full-size Han Solo point-and-click adventure in the style of LucasArt's SCUMM engine in his spare time.The game is a passion project that will be released for free when it is ready. But even before Han Solo Adventures, Davidson was making obscure games that didn't necessarily have a proven market. Case in point: the first game he ever completed was a remake of a prototype Vectrex game based on an old Molten Bradley board game called Dark Tower. Davidson recreated the game will full graphics and 3D and put it out as shareware.

Davidson wants to make games that he would play and create worlds that he would want to explore, and while authors and filmmakers may have abandoned the bubble helmet sci-fi vision of the 1950s, Davdison believes there is something there worth exploring. He sees a fertile ground in science fiction as imagined by authors of the 40s, 50s and 60s, and within that ground he sees an opportunity to portray an optimistic future – one where players don't adventure in fear or fight for survival, but set out to explore because they're curious; because space could be the next frontier. 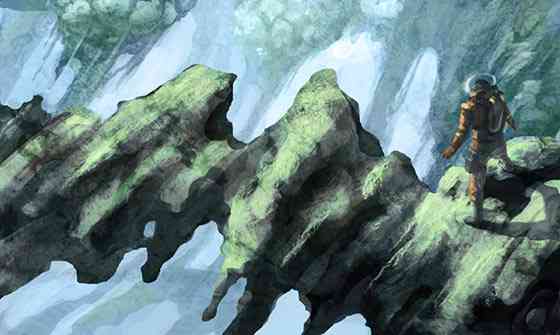 "There's a very different feel to sci-fi in the 50s because we still thought that space was our next frontier. I think we still thought that by 1999, we would have a moon base, we'd have a big space station where lots of people would live and eat McDonalds. It would be common place to get into a big rocket and go to one of our neighboring planets or even have faster-than-light rides to get us to other solar systems. All that was not out of the question. There was still this hope that one would find amazing things out there."

This sense of hope shaped much of the science fiction that was written during the time. While there were plenty of stories predicting the end of the world and alien invasions, there were just as many, if not more, stories of humans flying to Venus, finding new life forms, and humankind expanding its existence well beyond planet earth. But after scientists sent probes to Venus in the 1960s that failed to find any lifeforms that were able to survive the planet's extreme heat and gaseous atmosphere, Davidson believes these findings put a damper on that kind of adventure science fiction and tainted every bit of science fiction that came after that.

"My feeling was if you're going to do a kind of universe, you need to back up and you need to put yourself in the shoes of the 1950s science fiction authors who had these amazing visions of what the future would be like, and you have to then go forward and see the future the way they did," he says."

"A lot of people have asked me why does the game take place in 1999, well it doesn't take place in our 1999, it takes place in 1999 envisioned by those 50s science fiction authors and it's a future that I think a lot of sci-fi fans wish we had instead of the future where we know we are basically alone at least in this solar system and there's really nothing that we're going to go out there and find any time soon, and space is not as interesting as we had all hoped it would be."

And so here he is, committing fully to the project, bubble helmet, ray guns and all. He's taking the additional step of creating the entire game using stop motion animation. 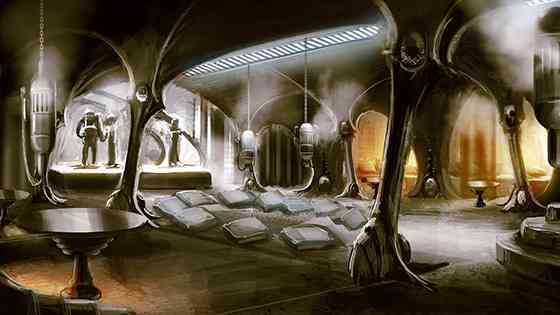 "Everything that I saw and everything that I found, graphic-wise, just felt to me like things I had seen before in other adventure games like The Dig where there were some cell animated sequences, Full Throttle which looked fantastic and I loved the art style, but again I've seen that before, and I just didn't feel like I was going to be bringing anything new to the table if I did it that way," he says.

"I was watching a Ray Harryhausen movie and it hit me that if I'm going to be putting the player into a 1950s science fiction movie and I really want to evoke that feeling, the only way to really do that is to create visuals in the same way that they did, which means that the Venus backgrounds of this alien world would need to be created using a combination of matte paintings and miniatures and the creatures needed to be walking around and they needed to be animated in stop motion. They can't be traditional cell animation or they're not going to evoke that kind of feeling."

Characters and creatures will first be sculpted before having foam latex puppets created out of them. Collaborating with a special FX team, Jack Houston will be a CG-free game. Davidson is also creating a radio drama to release before the game so that players will have an authentic 1950s sci-fi experience that also fills them in on much of Jack Houston's backstory in the lead-up to his adventure. 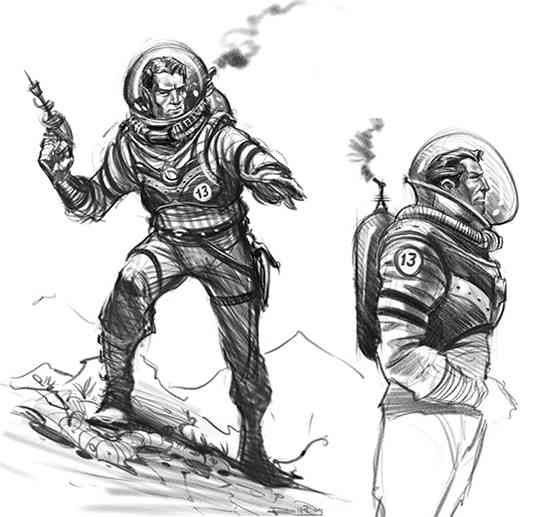 At the time of writing, Jack Houston and the Necronauts has raised $42,526 of a $56,000 goal. Davidson has his game all planned out, and he knows there is a market for a game that offers players a future of adventure and possibilities.

"I really hope that when players first enter the world of Jack Houston, they see something that just looks fundamentally different to any game they've played before," he says.

"I want players to come into it with this whole rich backstory that will make the experience of taking control of the character so much deeper, so much more interesting, and I can't wait for players to get into the world the way I have been seeing it."

Jack Houston and the Necronauts can be backed on Kickstarter.