A fake Android version of Chair Entertainment's Infinity Blade 2 is available on the Google Play Store.

A fake Android version of Chair Entertainment's Infinity Blade 2 is available on the Google Play Store.

The game, a 2.2MB download, went up on July 28th at version 1.0, whereas the iTunes App Store lists version 1.2 and is a 1.03GB file. Chair has not released Infinity Blade 2 on Android; the iOS version's publisher is "Chair Entertainment Group, LLC," whereas the Android impostor is published by "2011 Chair Entertainment Group LLC." The fake's publisher merely copied the game description and added the word "Android" where appropriate.

While Chair charges $6.99 for the iOS game, the Play Store offers the fake game for free, claiming that users only have to earn 50 Tapjoy points before the full game download unlocks. Instead, negative user reviews report that the game either doesn't unlock upon reaching the point threshold, or that the download is a gigabyte of junk.

When contacted for comment, a Chair Entertainment representative gave Polygon the following statement:

It has come to our attention that a fake version of Infinity Blade II has been posted to Google Play. We have contacted Google to have this removed. For the latest information on all Infinity Blade products, including the current platforms supported by the games, gamers can always refer to the official site at: http://infinitybladegame.com.

We were able to find the fake Infinity Blade 2 game on the Play Store — photo below — but we strongly recommend staying away. 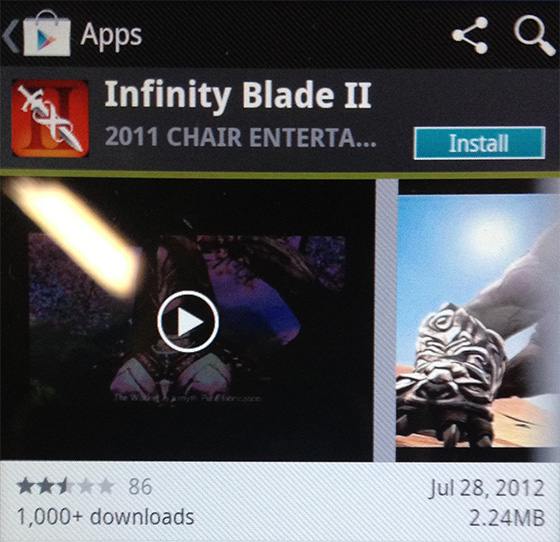