Learning and leaping with the 'LittleBigPlanet' Vita beta

Share All sharing options for: Learning and leaping with the 'LittleBigPlanet' Vita beta

There are a lot of intricate moving parts in LittleBigPlanet for the PS Vita, so, much like its console-based predecessors, it required an extensive beta test to ensure that all the cogs and gears of its trademark Create mode were in working order.

There are a lot of intricate moving parts in LittleBigPlanet for the PS Vita, so, much like its console-based predecessors, it required an extensive beta test to ensure that all the cogs and gears of its trademark Create mode were in working order.

There was a lot for the testers — a body largely pulled from the more rabid parts of the franchise's fan base — to put through the wringer. Vita-specific features aside, this new incarnation has taken on the ambitious goal of putting all of LittleBigPlanet 2's Create tools (including the visual programming set of the Circuit Board and wildly versatile Controllinator) into a handheld version of the game.

Whereas the PSP LittleBigPlanet, with its two planes of depth (to the PS3 versions' three planes) and limited toolset, felt like a shrunk-down cross-section of the series' console offerings, LittleBigPlanet Vita feels robust. It nails the oftentimes trial-and-error learning experience of creating a level — this is evidenced by most of the community-made levels I played during the beta, which frequently started as simple, gimmicky platformers and ended up as something much more sophisticated.

Even returning LBP level designers had something to learn, as the dual touch inputs and gyroscopes of the Vita are represented in a number of new Create tools. New, surprisingly simple Circuit Board inputs track your gestures on the screen and rear touchpad, and can be converted to activate the usual objects and modifiers: Connect a touch sensor to a Destroyer on any given item, and tap it to — you guessed it — destroy it.

Create mode is more streamlined than its ever been

There's a ton more nuance than that, of course, but like in the past LittleBigPlanet games, the level of nuance you choose to adopt is entirely up to you. To wit: You could stick a special modifier onto an object which makes it manipulatable by touch, and set parameters for how that object can be dragged around the environment. Or: You could just make that object out of a special Touch-based material which does all that stuff for you.

Most of the functions work very well, but when it comes to creating carefully measured objects (like rooms, or backgrounds for those rooms), the touchscreen proved a poor substitute for a pair of thumbsticks. Fortunately, the game doesn't tie you to one mode or another. After a half hour of experimenting, I found a balance between the two schemes that worked for me, navigating the UI and level-at-large with the touchscreen, and making more detailed changes with the standard controls. 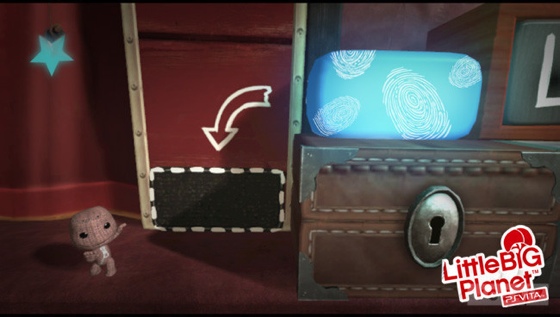 Though Create mode is more streamlined than its ever been, it seemed like most of the community was saving their time and effort for the full version of the game, as their beta levels would be deleted in a matter of weeks. Notes were appended to the popular levels and staff picks — apologies from creators who are holding onto their respective masterpieces until the game's full toolset is given to them unreservedly.

On the whole, user-generated levels seemed a bit smaller than their console counterparts; partially for the reason explained above, but also because some had maxed out the amount of stuff that could go in a single level. This isn't necessarily a bad thing: First, the maxed levels were super dense, so lengthier creations certainly aren't outside of the realm of possibilities. Second, even if they are, the shorter length of the average level lent itself to the nature of handheld gaming — moving through streaks of polished, two-minute-long levels gave me a WarioWare platformer vibe that really, really worked for me.

...gave me a WarioWare platformer vibe that really, really worked for me

LittleBigPlanet Vita cleverly offers players two different options for accessing Community levels: They can either download them — the only option afforded to LittleBigPlanet PSP players — or stream them, like the console versions allow. You can move between these two options at will: If I streamed a level I really liked, I'd save it, creating something of a "Level Mixtape." If I was going somewhere later in the day (with my pathetic, Wi-Fi-only Vita), I could download some quickies for the road.

What's most promising about LittleBigPlanet Vita is how the community developed as an almost singleminded, self-educating organism. It's a phenomenon I saw in past LBP betas as well: A user makes a level with an altogether new application of the Create tools, and the rest of the community plays it. That new application shows up in another creator's level in a new form — and the cycle continues, ad infinitum.

This group enlightenment led to some pretty neat gameplay that's never been possible in LBP before, some highlights including:

Even the levels that weren't based around gimmicky applications of the new tools felt fantastic. This is good, good platforming — and endless platforming, if the community expands with the exponential haste of the beta testers. As excited as I am to get my hands on the full toolset of the final game, I'm more excited to watch that community learn; and I'm even more excited to play the fruits of their collective labor.

Halo Infinite getting new multiplayer playlists, including SWAT and Slayer

Quake just got an official Horde Mode, in the year 2021

This Arcane character could make a surprise reappearance in season 2