SimCity ditches 'smoke and mirrors' for realism with GlassBox

"Up until now, to get your hands on a simulation this sophisticated, you'd have had to be in the military or work for a university." Maxis' Ocean Quigley

Share All sharing options for: SimCity ditches 'smoke and mirrors' for realism with GlassBox

The SimCity reboot set to release early next year has come a long way from the original 1989 SimCity. GlassBox, developer Maxis' new in-house engine, was built from the ground up to create intimacy on the microscopic level for the series' renewal.

"Ten years ago, our ideas were just too ambitious, but after Spore shipped, we realized that we could actually do them — computers had finally gotten powerful enough," Maxis Creative Director Ocean Quigley told Polygon.

All objects in SimCity are free agents running on individual AI. GlassBox is designed to simultaneously run thousands of these moving agents, such as Sims and vehicles, and thousands of immobile units like buildings, creating a city with an unnumbered amount of evolving parts at any given time. For example, a factory will use up coal resources and produce air pollution, with both the coal reduction and pollution production running separate sets of rules. These rules will trigger events and scenario-specific animations.

This type of AI functionality extends from the micro-level of individual Sims all the way up to the makeup of the city's environment, giving SimCity a more intimate feel.

"You have to really think through all of the real cause-and-effect relationships that make up a city and that make a city work," added Quigley. "You have to figure out how you're going to model the city's systems, and then you have to make them understandable.

"With previous simulations we could get away with a lot more smoke and mirrors. Now that we're simulating all of this stuff for real, we have to design with more integrity. Designers have to research how the things that they're simulating really work. It's an excellent challenge." 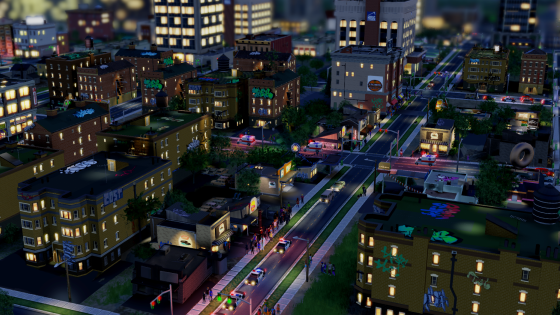 Several new features bring SimCity closer to realism, most notably the inclusion of curved roads — a series first and the result of fervent fan demand. "It was the number one thing people asked for," said Karen Tong, Senior Product Manager for EA. "Curvy road, cul-de-sacs, roundabouts — now you can build them all."

A news wire flickers in the upper-left corner of the screen, ticking off information and providing clues to help players discern their city's needs. "The city talks to you," said Tong. "It will provide vibrant visual cues when something is going wrong." A group of raucous protesters outside of your city hall can indicate dissatisfaction with the government, or the rapid appearance of graffiti on houses could point to vandalism problems in certain neighborhoods.

SimCity also features tilt-shift photography at street level. Cities stretch out into a hazy horizon, creating the illusion of vast breadth and depth while offering seamless presentation of the sim's timing ratio of one real-life minute to one in-game second. "Tilt-shift works because it gives us a license to speed things up, to exaggerate the things that bring a city to life. And it's an aesthetic that lets us focus on the important elements of a city by manipulating scale and getting rid of the stuff that's boring or irrelevant. It's a natural aesthetic for SimCity." said Quigley.

"Up until now, to get your hands on a simulation this sophisticated, you'd have had to be in the military or work for a university," said Quigley. "GlassBox takes that technology and turns it into something for you to play with."