'NHL 13' challenges you to be a smarter hockey player

Be smart: obey the laws of physics

Share All sharing options for: 'NHL 13' challenges you to be a smarter hockey player

EA Sports' NHL 13 delivers a revamped skating engine and AI improvements that will force you to rethink your play style.

Hockey video games don't adequately convey the breakneck speeds at which the sport is played. Skating distinguishes hockey from North America's other popular sports, but in video games, it never felt quite right.

EA Canada is finally addressing that element in NHL 13, the next installment of EA Sports' well-regarded hockey franchise, with a fundamental overhaul that seeks to deliver a physics-driven simulation of skating, along with some significant artificial-intelligence improvements. These elements don't just change the ebb and flow of playing the game — they force you to alter your play style altogether.

Ice hockey is defined by its frozen playing surface. Instead of running around on a field, NHL athletes don blades of steel to skate up and down a 200-by-85-foot rink. Few moments in hockey are more exciting than a potential icing call, with two players chasing down a puck to secure or prevent icing. But until now, that chase didn't look or feel like real hockey, and EA Canada knew it.

"The blades [weren't] respecting the ice," said line producer Sean Ramjagsingh, speaking in an E3 demo about the serviceable but unrealistic skating in last year's game, NHL 12. In real life, those narrow blades are the only desirable connection between a player and the ice, but hockey video games haven't previously represented that interface properly.

NHL 13 debuts a new skating engine called True Performance Skating, which aims to accurately deliver the explosiveness, top-end speed, and momentum of ice skating. By "explosiveness," EA Canada means acceleration: going from a standstill or a gliding state to racing down the ice. And speed differentiates the Marian Gaboriks of the league from its fourth-line grinders. But momentum is the physics-based price that balances out those elements — and it's momentum that will rewire the brains of NHL series veterans.

Speedsters like Alex Ovechkin separate themselves from the pack within their first few steps; by then, most players have no hope of catching up. They churn their legs to generate powerful strides while pushing the puck a short distance ahead of them. It's a distinctive motion, and NHL 13 replicates it well, thanks to over 1,000 new animations. Once they reach their top speed, guys like Ovechkin can blow by almost everybody on the ice. But it wasn't that way in NHL 12, where a defenseman skating backward could often keep up with a scorer flying down the rink. That's no longer the case.

you might even lose your edge and crash to the ice

Momentum keeps the NHL's speedy players in check. Moving faster reduces your ability to turn or turn around, of course, and NHL 13 finally takes momentum into account. If you're racing along the side boards at speed, you won't be able to make a 90-degree turn toward the net — turning on a dime simply isn't possible on skates. NHL 13 offers subtle visual and physical feedback to let you know you're cutting too quickly: powdery ice sprays from your skate blades, and the controller vibrates. Turn too sharply, and you might even lose your edge and crash to the ice.

The effects of momentum are numerous and vast, but in general, momentum challenges you to reassess your play style, both on offense and defense. Speeding up the ice and cutting across the net is still doable, but more risky and less effective. On the other hand, fast skaters finally make the dump-and-chase strategy a viable offensive tactic. But thanks to the revamped speed and acceleration implementations, it's much easier to get caught out of position if you're playing defense too aggressively.

Hockey at the NHL level is about maintaining possession of the puck, especially in the attack zone. In the time I spent playing NHL 13 last week, I managed to cycle the puck effectively, although I usually kept one or both defensemen back as a contingency plan. I was thinking less like a video game player, and more like a hockey player. Physics-based skating makes strategy all the more important, and EA Canada is also making changes in that field.

EA Sports Hockey IQ refers to a suite of AI improvements in NHL 13. The new system makes players smarter, giving them a heightened awareness of each other and of the action on the ice. NHL 12 introduced some minor AI upgrades, such as players knowing when to drag a skate to stay onside. But this year, Hockey IQ is set to deliver sweeping changes focused in three areas: goalies, players, and team systems.

In previous years, skaters and goalies were only aware of the puck carrier and of the events in their immediate vicinity. Netminders were susceptible to cross-ice one-timers because they couldn't keep track of scoring threats, like an open player in a 2-on-1 situation. NHL 13 goalies recognize the danger of an odd-man rush, and will position themselves accordingly. In addition, EA Canada has given them independent limb movement, so they can make adjustments for deflections.

Skater AI has seen similar improvements. Defenders are now much better at thinking ahead of the play and anticipating a pass, because they're aware of players away from the puck. In the past, you might have yelled at your CPU teammates after your team allowed a goal, wondering why they didn't challenge an offensive player with a poke check or muscle him off the puck. EA Canada is promising that won't happen as much anymore. 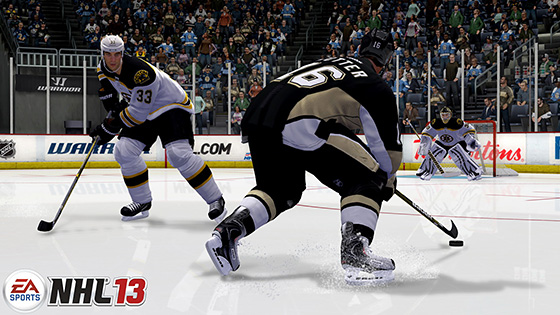 Players are part of teams, and just as individuals play hockey differently, each team has its own style. The New York Rangers don't score much, so they live and die on their stifling defense and the Vezina-winning goalie behind it, Henrik Lundqvist. But the Pittsburgh Penguins and their high-octane offense regularly light up the scoreboard; they led the NHL in goals this past season. EA Sports Hockey IQ brings to bear the league's variety of team philosophies, so going up against the St. Louis Blues will be very different from playing the Vancouver Canucks.

Hockey IQ also means that teammates work better together, whether it's passing the puck on the power play or forcing turnovers in the neutral zone, within their team's particular system. The feature might even impart some hockey knowledge to you: after playing NHL 13 for a while, you may come to understand the differences between a 1-4 formation and a 1-3-1 setup.

EA Canada hopes that NHL 13 will offer a better simulation of the physical and mental aspects of one of the world's toughest sports. It's immediately more challenging than previous entries in the franchise because it requires players to think on their skates — but that's a step in the right direction.