Meet Connected Careers, a mode that's too big to explain

Connected Careers, perhaps the most significant change in Madden NFL 13, is a mode with so much breadth and depth that even EA is having trouble explaining its scope.

In the modern video game industry, developers and publishers often skip the press and build up excitement around their games through direct-to-consumer marketing. They interact with fans through forums and social media, and reveal information on their websites instead of through press releases. This communication allows them to get their message across to the people who care about it the most, and ideally, get them to buy the products they make.

Some messages, though, are tougher to convey than others.

EA Tiburon is promising that Madden NFL 13 will quiet the usual crowd of gamers who deride each new entry in the series as a "roster update." Perhaps the most significant change this year is Connected Careers, a mode with so much breadth and depth that even EA is having trouble explaining its scope. It doesn't help that Connected Careers does away with much of what's familiar from three hitherto disparate modes — Franchise, Superstar, and Online Franchise — and replaces them with a comprehensive setup that Josh Looman, Lead Connected Careers Designer, says is "deeper than all of the other three modes combined."

Franchise has the longest history, having debuted in Madden NFL 99. The series' first foray into current-generation consoles, Madden NFL 06, brought Superstar into the world. Online Franchise came four years later in Madden NFL 10. Since they didn't communicate with each other, changing a single feature across all three modes took three separate efforts — a significant waste of resources already limited by the harsh nature of an annual development cycle. Yet that was the way it had to be: each mode offered a different type of NFL experience, and each had its own way of doing things. 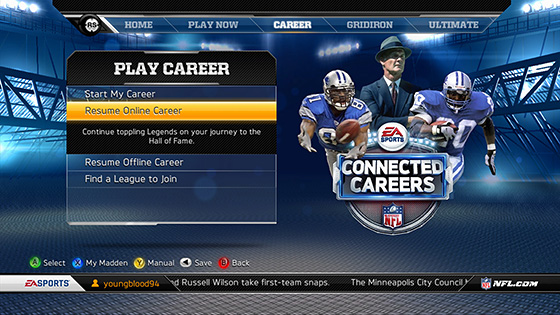 Looman has been lobbying for the implementation of Connected Careers, in some form, for four years. The Madden team at EA Tiburon began working on it in late 2010, at the start of the Madden NFL 12 development cycle, and with good reason: Connected Careers is a complete overhaul of Madden's career modes, and signals a bold new direction for the franchise.

The title indicates that the mode unites Franchise, Superstar, and Online Franchise under one banner, and also refers to its networked nature. Connected Careers lets you go through an NFL career as a player (the old Superstar mode) or coach/general manager (Franchise), either by yourself or with up to 31 friends in a league (Online Franchise). If you want a pure solo experience, offline Connected Careers lets you compete against computer-controlled opponents. But you can also play online Connected Careers alone in a private league, which will give you access to connectivity such as a Facebook page and Twitter account for your league.

You can create a first-year player or coach from scratch, an option that supports Photo Game Face; assume control of any current player or coach; or start out in the rookie year of one of 30 legends, including Hall of Famers such as Michael Irvin and John Madden himself. There's more to that choice than the career path alone. 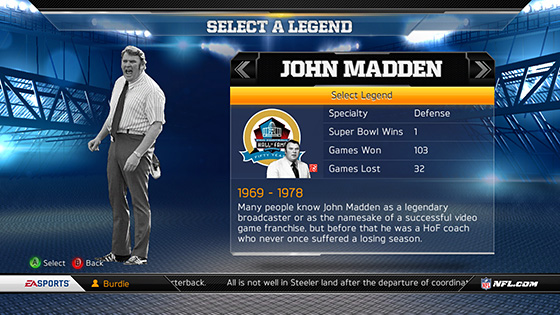 Connected Careers isn't just about living out your football fantasy — the mode is designed to take your play-through and tell a story with it. After all, that's what makes sports so compelling and engrossing: we follow the arc of a favorite athlete's career, spellbound as it unfolds. At the start of your career, you'll choose a backstory for your player/coach. A top draft pick will have higher initial attributes, but also the elevated expectations that come with that status; on the other hand, teams will ask much less of an undrafted nobody. Either way, EA Tiburon got rid of the "potential" attribute: anybody can become an NFL legend.

That's the other smart aspect of Connected Careers, and it's particularly appealing to über-competitive buddies and football history buffs. The mode considers all of your statistics and accomplishments to compute a "Legacy Score" for your career, and for every other player (including the aforementioned legends). That single number lets you compare your body of work to anybody else's, and it's position-agnostic. So if you want to create a quarterback and see how you stack up in terms of legendary-ness against Jerry Rice, you can. The positions come into play when the Hall of Fame comes calling — or doesn't. Your Legacy Score determines whether or not you make it to Canton, and the threshold varies by position (for example, it's somewhat easier to get in as a running back than a wideout). Of course, the metric is also useful for securing bragging rights among the friends in your league. 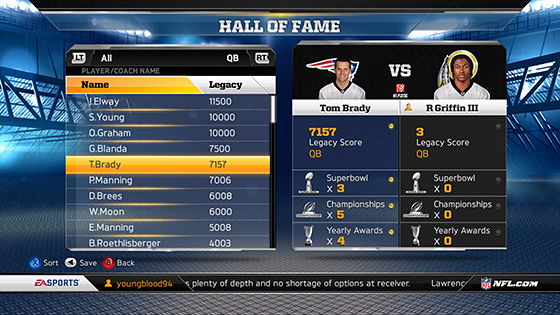 You earn XP by completing three types of goals: weekly (e.g., rush for 100 yards); season objectives in four tiers (e.g., total number of passing yards), where better performance gives you more XP; and career milestones (e.g., win a Super Bowl). Experience points buy rating or trait upgrades for players, and boosts for coaches, like an increased chance of re-signing a star. If you need some extra XP, you can grind in practice mode. Speaking of grinding, the progression system ensures that you won't become a 99-rated superstar in your rookie year.

EA and Looman call it "the first true sports RPG," and while that's debatable, what is clear is that Connected Careers offers an unprecedented amount of variety while letting users largely determine the nature of their experience. Unhappy with the course your career has taken? You can retire and start a new career, without starting a new league. This keeps the mode, which runs for up to 30 seasons, from getting stale. If you win three Super Bowls as a player and decide, Michael Jordan-like, that you've reached the pinnacle of your sport, you can call it quits and pick up the career of Baltimore Ravens head coach John Harbaugh. This won't affect the other players in your league at all.

Connected Careers also intertwines your tale with those of other individuals in your league. Story events shake things up and keep you invested in your league. A player may switch to the NBA; a coach might come out of retirement. An in-game news wire keeps you apprised of these storylines, and a virtual Twitter feed — complete with 140-character missives in the style of media personalities such as Adam Schefter and Trey Wingo — comments on them. Whether you're a coach or player, you must maintain a certain level of success: if you haven't been hired or signed by the end of the offseason, the mode forces you to retire.

Yet EA is having difficulty telling the story of Connected Careers. Its announcement alongside the debut of Madden 13's new physics engine at E3 appeared to get lost in the shuffle, and because EA didn't pitch the mode well enough, confused Madden fans took to message boards to complain and guess about the existence or lack of certain features. Major losses include local co-op in Franchise mode — this year, a Connected Careers league only allows for one player per console — and the ability to import a draft class from NCAA Football.

Indeed, there's a lot to explain: I attended a full-day Madden 13 press event at EA Tiburon in mid-April, and Looman's Connected Careers presentation took up a whole hour. I recently asked a Tiburon representative about the developer's efforts to get the word out, and he told me that the team is readying additional, detailed blogs for Madden 13's official website.

But while the developers are putting out thousand-word blog posts, they also believe that in the case of Connected Careers, the fans — the ultimate arbiters of worth — simply have to get their hands on it to understand why it's such a big deal. Marketing campaigns can build plenty of buzz, but sometimes, words, images, and videos just aren't enough.