"Shit, there's no instructions in Minecraft and my 7 year old is working it out." Matt Webster, Criterion Games

Share All sharing options for: 'Need for Speed: Most Wanted' streamlines, turbo-charges fun

I suppose you could spend all of your time in Need for Speed: Most Wanted driving quickly in expensive cars. But why do that when you can devote your in-game time in the open world racer to smashing through billboards designed to proclaim the ramp jump prowess of your online friends?

"How do I want to beat Craig? I want to smash this BMW through his face."

I suppose you could spend all of your time in Need for Speed: Most Wanted driving quickly in expensive cars. But why do that when you can devote your in-game time in the open world racer to smashing through billboards designed to proclaim the ramp jump prowess of your online friends?

Criterion Games' executive producer Matt Webster had plenty to show me during a recent in-game tour of the in-development game. During my 40 minutes or so zipping through the streets of Need for Speed: Most Wanted I learned a lot of things:

But the most important thing I discovered about Need for Speed: Most Wanted was that it's carefully structured around the importance of having fun quickly, always and with as few barriers to entry as possible. 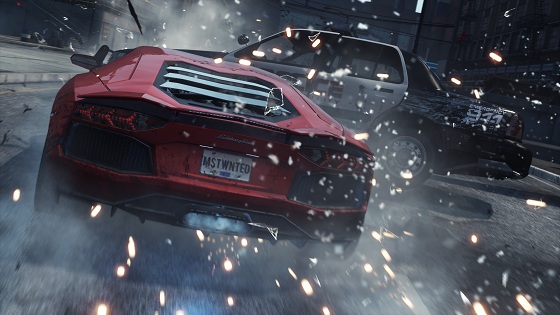 Burning down a highway in a Lamborghini, the setting sun turning the sky a sherbet orange, I slip into the wrong side of traffic and start to use the vehicles as moving pylons.

"This is the point for us," Webster says as I slip the car between traffic. "Inside five minutes you're able to drive a very fast car, very quickly into oncoming traffic and feel like you're in control."

The notion of removing traditional barriers in games created by the desire to add leveling, progression, and unlocks is a big part of the design philosophy behind Most Wanted, Webster tells me.

"We will start you off in a car, but all of the other cars in the world are there for you to go find and if you find them you can drive them," Webster explained. "That means you shake up the conventional wisdom of driving games, which is to reward you with cars. Just driving a car is a significant reward.

"If we have an opportunity to make an unconventional game why wouldn't we take it?"

The decision to ditch the idea of rewarding with cars was driven in part from lessons learned while developing Burnout Paradise, he said. They learned that the game should come to you. That there should be opportunity around every corner.

And it's Most Wanted's take on Autolog, a competition tracker first seen in Criterion Games' Need for Speed: Hot Pursuit, that drives that point home.

"Hey, go work it out. Shit, there's no instructions in Minecraft and my 7-year-old is working it out."

Where Hot Pursuit had players hop into a menu outside the game to see whether their friends had bested their race times, Most Wanted takes Autolog and sticks it into every competitive aspect of the game.

Most Wanted has logs for racing, for fastest time past a speed camera, further jump through a billboard, most security gates collected, most hideouts away from cops discovered, most cars found.

And you never leave the game to find them. In same cases, like the speed camera, whipping by gives you a quick alert showing how you're doing, while driving up and stopping floats a full menu on screen.

But it's the billboards that I find most enticing. The player with the furthest jump among your friends has their avatar's face displayed on the billboard. To beat the score you need to smash through the billboard, and their face and fly further while doing so.

That means a talented enough player could populate a friend's entire city with billboards of their faces, each showing a missed opportunity to be best at something.

"That's what we mean about the integration of friends and their play into the game more deeply than ever," Webster said as he steers his car toward a ramp and a billboard.

The face on the billboard is the avatar created by Criterion Games' creative director Craig Sullivan.

"There's the competition," he said. "How do I want to beat Craig? I want to smash this BMW through his face." 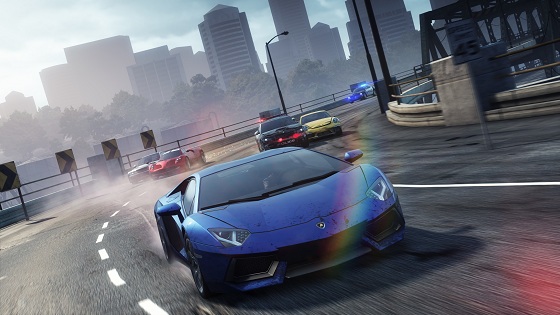 "We all have those people on our social networks who are brilliant at these games and so it's going to be difficult for me to compete against them in some particular races," he said, "but if the goal is to just jump the furthest through that particular billboard ..."

On top of all of these instant, built-in autolog competitions, Most Wanted also still includes quick races that features laps, sprints, drags and circuits. And the city is populated with police looking for cars with rising heat levels and then chasing them down to arrest the driver.

The open world nature of the game, though, means that no one person will likely have the same sort of experience, even within the first hour, Webster said.

"I might spend my first hour rinsing everything through on that BMW, or I might see a Jaguar I want to drive," he said.

While the developers don't want to make finding and driving those cars a treasure hunt, they do want to reward a player's sense of discovering and play. They also want to avoid over explaining the rules of their game.

"We think we've been guilty of it in the past, being too prescriptive," Webster said. "Instead we want to say, ‘Hey, go work it out.' Shit, there's no instructions in Minecraft and my 7-year-old is working it out.

"It's that sense of discovering and play that we felt we lost that we're trying to bring back by changing this structure and having the discipline to say, ‘You know what? We're not going to do some of the things we've done before, we just want to let people play and explore the city and drive the cars.' It's very liberating."