'Dishonored' teaches the freedom and dangers of world-building

"You can spiral into world design forever."Harvey Smith, Arkane Studios

Share All sharing options for: 'Dishonored' teaches the freedom and dangers of world-building

The world of Dishonored is entirely and completely new. Nobody — not even the folks at Arkane who are developing the game — has fully explored its streets, alleyways, and jagged skyline.

According to co-creative director Harvey Smith, the evolution of Dishonored was a slow, but radical one. Sea changes from one motif to another were common, and often pretty drastic.

"To be honest, it's not just that no one else knows what you're doing," Smith explained, "it's also we didn't know. Like, halfway through the project, we were still not using the word 'steampunk,' you know? At a certain point, halfway through the project, we still thought the game was set on Earth, instead of this alt-reality Empire of the Isles, this island chain in this quasi-Victorian, alt-Industrial Revolution setting."

"That stuff gelled very slowly. It was very organic, and it was one piece at a time from different people on the team." 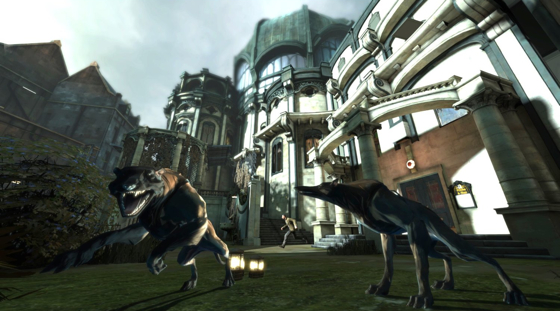 Ricardo Bare, lead designer on Dishonored, elaborated on the title's once real-world setting — the original foundation for the title, of which only infrequent glimmers remain.

"The roots of the game are in something real, and historical," Bare explained. "We started looking at things like the real city of London in the 1600s, and then, we're game designers who like fantastic things, so it started to creep in that direction more and more. Especially when we started thinking about, 'Well, the player has these powers.'"

"At first, it was going to be this super, super rare thing. But then it started to grow a little bit more, and then that started to bleed out into, 'Well, the city should have guys on stilts.' The seed of that idea was based in the real, also. There were these guys in London called lamplighters that walked around on these giant, wooden, rickety stilts and would light the lamps and turn off the lamps. That eventually transformed into this military unit, the Tallboy, which probably blew you up many times in your demo."

"...you can spiral into world design forever.

Once freed from the game's historical shackles, Arkane was able to explore every single aspect of Dishonored's world, inventing histories, geographies, currencies, sociological trends — every little thing that defines the infrastructure of a civilization.

"It is incredibly gratifying," Smith said. "It's exciting work. Every day you go in and do something different like, one day we're tuning view cones of the AI ... and the next day we're making a calendar. We're doing research on Wikipedia about the many different kinds of calendars in the world, the Mayan calendar, the Gregorian calendar."

"There are 100 calendars, right? In our [game] world, we use 13 months with 28 days each. And we decided to go with something that could have emerged, like the Month of Nets, the Month of Rain, the Month of Cold, the Month of Wind. And then people allude to that in the world. You give a little at a time."

That freedom is a double-edged sword, though. Inventing a calendar is certainly creatively exciting, but those kinds of discussions drain time and resources from the development project as a whole — a process which, under certain developers, is more or less a zero-sum game. Avoiding getting lost in invention is just as big a challenge as the invention itself, Smith explained.

"Bethesda's behind us 100 percent.

"A good example is, at some point, we came up with our own coins. And the old coins had the face of the Empress on them, and the new coins have the face of the Lord Regent, the tyrant. And people wanted to know, 'What should we call them?' And we had already gone pretty far by having an artist spend time devising these coins, and telling them that there are two versions, and why. People argued about what the symbol could be; there was a point where we just said, 'Guys, this is enough. They're called coins. Let's just move on.'"

Even once a world has found its priorities, its designers still have to make sure that it doesn't ostracize its visitors.

"Players could be like, 'What did he just say,'" Smith said. "'Hagfish? The Month of Nets? I don't understand any of that! I don't know what that is.' There's a fine balance between alienating people and — you've got to give them something novel that they are intrigued by, but also has a familiar ring to it somehow. And I think we've found a good place for that." 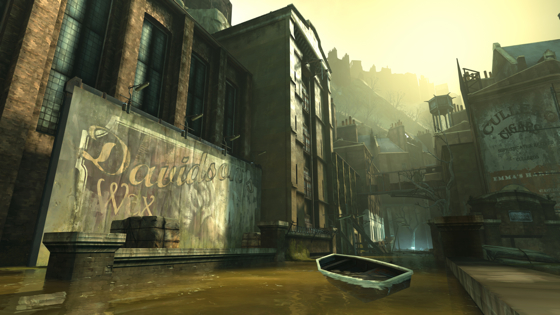 Even with its limits, the world of Dishonored is unlike that of any other new intellectual property to surface this year. Bare chalks that up to two factors: first, that the development and artistic teams, which have also worked on the iconic worlds of Half-Life 2, Deus Ex, and Thief, have plenty of experience in this department.

"So it's really great to be working with people that support that. Bethesda's behind us 100 percent. This is a rare opportunity. We've put our hearts into this. We've been working on it for over three years now. So we're super excited to show everybody our work and we're just hoping that people like it as much as we do."