"It's fun watching in the stands, but it's also fun to watch at home, when people are telling you what's going on." Treyarch

With Black Ops 2, Call of Duty developer Treyarch is not just rewriting many of the systems that power the series' online multiplayer. It's also openly embracing its eSports fanbase — those who play Call of Duty professionally and the people who tune in to watch high-level competitive play.

Calling eSports "a major, major initiative for us," game design director David Vonderhaar says that Call of Duty is already a sport, but it needs the production, the personality, and the means to broadcast that sport to a wider audience. To help make that happen, Treyarch is building new tech for Black Ops 2 to more easily reach the masses, through in-game livestreaming and color commentary tools branded CODcasting.

If you aren't an eSports aficionado or have never watched a shoutcast, you may still welcome the addition of Black Ops 2's seasonal League Play

With League Play, Vonderhaar says he wants Black Ops 2 multiplayer to be fun at every level, not just for the hardcore Call of Duty player who spends hours each night honing his headshots.

"When I play and win, I have a really good time," Vonderhaar explains. "I also have fun when I almost win. It's just not very fun when I get the shit kicked out of me. It also isn't that much fun if I constantly kick the shit out of you. Beating people senseless can get boring."

To address that, Treyarch is introducing skill-based matchmaking for Black Ops 2 multiplayer, an attempt to ensure that players are competing with others of a similar skill level.

Skill-based matchmaking ensures that you are challenged but not out-gunned.

Treyarch is proposing seven seasonal brackets, in which players will be placed based on their performance as time goes on. Black Ops 2 will find an initial bracket for you somewhere after a few games, but players are expected to move up and down in their ranking as they win and lose in their division. They won't be competing against the entirety of the Call of Duty-playing masses, but a smaller pool of about 500 to 1000 players near their skill level, Vonderhaar says.

"We have to be fun to watch," Vonderhaar says. "It's fun watching [pro sports] from the stands, but it's also fun to watch at home, when people are telling you what's going on." That's what CODcasting is for. 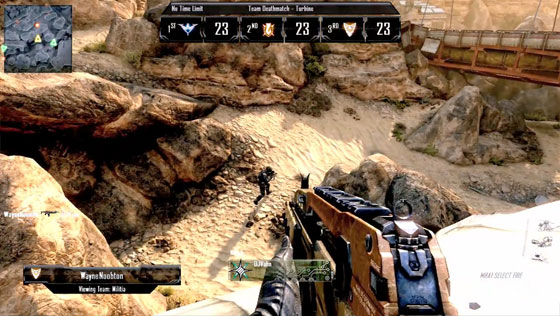 Black Ops 2's broadcasting tools are simple to use. CODcasters simply join a multiplayer game as a spectator and are given the ability to see all the action in a multiplayer game from different views for play-by-play coverage. (To prevent cheating, live streams of multiplayer matches are delayed a few seconds.)

During CODcasting matches, viewers will see a score panel at the top of the screen. "Score panel is our way of linking this to sports," says Mike Rufail, Treyarch's in-house eSports advisor. "Essentially, when you flick the channel over to a sports broadcast, you immediately will find out what the score is, how much time is left in the game, who's in the lead. It's very necessary information."

Another key visual element for the CODcasting HUD are player name plates, shown in the lower left of the screen.

"We are in a first person shooter, so you can't really tell who the player is," Rufail says. "We want to make sure that, just like in sports broadcasts where you have jerseys and a name on the back of the jersey or a number, our name plates are a way to show the audience who they're watching."

CODcasters can quickly switch between players, from first-person to third-person view, as well as full-screen, overhead map view. An optional picture-in-picture view keeps the scoreboard permanently displayed alongside in-game action.

Shoutcasters will even have the option of listening in to the mic feeds of players to hear how teammates are communicating (or trash talking). "Listen-in mode is my personal favorite because [of how] competitive Call of Duty fans get; the communication that they have separates them from other teams. It's very passion oriented. Players get emotional and strategize. You get right in there with the players, hear what they're hearing, feel what they're feeling, and learn their strategies."

"We think there is tremendous opportunity to bring eSports to the masses and we think Call of Duty: Black Ops 2 is the game to do it."

While Treyarch is stressing the shoutcasting aspects of Black Ops 2, it also has in-development live streaming features planned from within the game. Live streaming is designed to be extremely simple; switch it on and out to the masses it goes. "No capture cards, no fancy computers [required]," says Vonderhaar.

"But we don't prevent people from live streaming normally," he added.

Treyarch still has more to reveal about CODcasting and live streaming, specifically how and when Call of Duty fans will get access to streams and who's going to provide them. That's still to come, Treyarch says, as are additional details about the studio's eSports agenda.

"Call of Duty is about competition," Treyarch studio head Mark Lamia said during a presentation at Gamescom in Cologne, Germany. "It's a sport. And Black Ops 2 has architected the framework for players to thrive at any level, and we have provided integrated tools to bring eSports to the masses.

"Black Ops 2 multiplayer experience is going to fit every type of player regardless of their play style or skill at all levels, while remaining faithful to the core of what people have come to expect from Call of Duty multiplayer."