Gamescom 2012: Everything you need to know

Share All sharing options for: Gamescom 2012: Everything you need to know

Riding in the wake of GDC Europe, Gamescom 2012 is Europe's largest trade fair for games and interactive entertainment. It runs from August 15th through August 19th in Cologne, Germany, and includes more than 600 companies from 40 countries, and Polygon will be on the floor to bring you all the Gamescom news you can shake a warlock's staff or a space marine's gun at.

Riding on the heels of GDC Europe, Gamescom 2012 is Europe's largest trade fair for games and interactive entertainment. It runs from August 15th through August 19th in Cologne, Germany, and includes more than 600 companies from 40 countries, and Polygon will be on the floor to bring you all the Gamescom news you can shake a warlock's staff or a space marine's gun at.

Unlike E3, Gamescom is open to both the public and the press, and that creates an eclectic mix of industry- and consumer-driven content spanning the continuum from gaming tournaments to mini job fairs to cosplay contests. It's designed to have something for everyone.

We're on the ground, and ready to file once the show kicks off, so before the anticipation drives us mad, we thought we'd give you a taste of what you can expect from Gamescom 2012.

The lay of the land 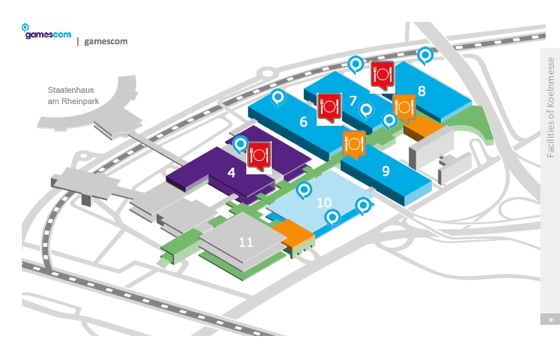 Remember how we said that Gamescom has something for everyone? Well, you don't have to look any further than the hall plan above to see what we mean.

Gamescom's entertainment area spanning buildings 6 through ten is the centerpiece of the show, and its geographical hegemony reflects it. From the 16th through the 19th, it's open to all visitors.

Inside the behemoth entertainment area, the event level (that's 10.1 and 10.2 for those of you following along at home) serves as a bastion of relaxation amidst all the gaming news. According to the organizers, "funsport, action and chillout is the motto," and there's a plenty of activity planned to support that claim.

The entertainment area includes a skate park and a leg of the Relentless COS Cup skating tournament. The Gamescom trailer cinema will show game trailers daily. Attendees can also play ping pong with their heads (that's called headis), crossboccia, soccer, basketball, and micro golf, and ride on a 3,000-square-meter go-kart track. The outdoor area includes a waterless wave and beach, a high rope course, and a motorbike test course.

On the Gamescom campus, attendees will find speakers' corner, where topics range from the media to the protection of minors. It also serves as home for the German CaseMod Championship, which gives teams of two 24 hours over three days to trick out a computer case. Germany's game industry occupies part of the campus, too, and this is where attendees can seek employment and learn about their options for an education in gaming. Over 600 square meters are devoted to the Retro Gaming exhibition, which presents the history of computer gaming. To celebrate the Commodore 64's 30th anniversary, the console will have a large presence. Rounding out the education, an exhibit called "The Art of Games" will focus on video game concept art.

The Gamescom congress is "dedicated to socio-political presentations, workshops, and discussions on games" with an explicit goal of expanding the dialogue between the video game industry and the rest of society.

Gamescom camp is a tent city filled with Gamescom attendees. 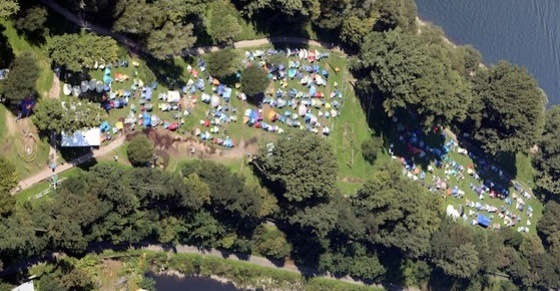 The Gamescom festival is a combination music and entertainment featuring many German-sounding bands like Kettcar, DER KÖNIG TANZT, and Olli Schulz. In addition to the tunes, Sony, Ubisoft, Activision, and Electronic Arts will have gaming stations scattered throughout the festival.

The Gamescom awards will be selected by a jury of 20 members of the international games industry, and the winners will be announced shortly after Gamescom 2012 concludes.

The Gamescom cosplay village is exactly what it sounds like. Costumes are far more than welcome.

Gamescom opens to press and exhibitors on August 15th and to the public on August 16th. Here's the breakdown of the biggest events.

August 17th through the 19th

What we've got below is a laundry list of publishers and developers, and the games they'll be bringing. (Notably absent from the list: Nintendo and Microsoft, both of which passed on Gamescom this year.) As a bonus, every link will take you to Polygon's coverage of each game, so you can read up on the very stuff you'll learn about from Germany.

Traveling to shows means visiting new cities, and there's always a few hot spots that visitors flock to. For example, if we were at E3 in Los Angeles, we'd book an appointment at an In-N-Out Burger.

Cologne, Germany, which was founded in 38 B.C., is steeped in history. Cologne Cathedral's heaven-focused spires are the focal point of the Catholic Archdiocese of Cologne and arguably the pinnacle of Gothic architecture. The University of Cologne is one of Germany's largest and oldest institutions of higher learning.

But that's the periphery. Gamescom is unique because it aims to be a self-contained city-within-a-city for the five days of its existence, filled with a mishmash of entertainment and news, business and leisure. Being a citizen of the temporary metropolis all but guarantees news of all shapes and sizes, and we can't wait to bring it to you.

Be sure to stop back during Gamescom 2012. We'll have constant updates, previews, and breaking news here and elsewhere just for you.