More bad teen decisions than an episode of Underaged and Engaged

Share All sharing options for: 'Until Dawn' puts the fate of the dumbest teens ever in your hand

In Until Dawn, you know what you're in for, because you've probably seen Scream, I Know What You Did Last Summer, Cabin in the Woods, or any other exploitive teen slasher film.

You already know what Until Dawn is. You've never played it before — you've probably only seen a brief glimpse of it during its debut at Sony's Gamescom 2012 showcase. However, you know what you're in for, because you've probably seen Scream, I Know What You Did Last Summer, Cabin in the Woods, or any other exploitive teen slasher film.

Supermassive Games is leaning hard into the tropes of the genre for Until Dawn, a PlayStation 3 exclusive (and, as of this moment, PlayStation Move-exclusive) horror title due out next year. And why not? It's a perfect fit for the video game medium, all sex and violence and irreverence. Based on a demo Supermassive recently ran a group of Gamescom attendees through, the studio isn't shying away from any of these essential factors.

Here's the all-too-familiar (or just-familiar-enough) setup: Insatiable, impossibly attractive teen lovebirds Michael and Jessica have been exiled from the rest of their party for their excessive PDAs. Instead of slowing their respective rolls, the pair decide to make the perilous trek from the ski lodge in which they're vacationing to a distant cabin, in which they will find the carnal privacy they so irrationally desire.

The dialogue between them is pithy as pithy can be, oscillating between moments of genuine humor and genuine idiocy — which almost always falls into the first category as well. Just like in a teen slasher film, these two sacrificial lambs are the absolute worst, running headfirst into and completely ignoring danger in an attempt to slake their lust. 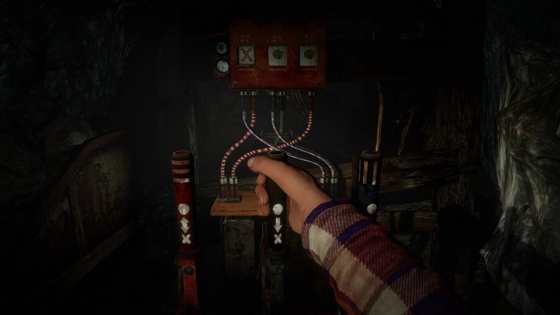 The game, intriguingly enough, is controlled entirely with the Move controller — no navigation remote is required. By pointing the Move at the screen, you can aim your first-person flashlight to highlight your surroundings. By pulling the trigger, you can move in the direction you're pointing, and by pressing the Move button, you can interact with objects in the environment. You'll have to search for those objects, but you can also click the "hint button" to temporarily apply a glow to interactive elements in your immediate vicinity.

For instance, Michael was able to find a few clues about the mountain's previous denizens, a band of miners whose fate is unknown, but likely horrific. He finds an image of the miners and, using the Move remote, the demo handler rotates it to find the date scrawled on the back. At one point, he comes across a complicated gate, and must maneuver the correct sequence of buttons, handles and levers to get it open.

Teen-horror can, despite its schlock, deliver a few scares.

The control scheme seemed like it could be kind of clunky, but it lent to the mounting horror. Yes, parts of the demo were genuinely scary — just as teen-horror can, despite its schlock, deliver a few scares. Like some of the genre's best entries, Until Dawn's demo made me want to see these two immeasurably dumb idiots meet a horrific fate, and then root for them, and then worry about them, and then get angry at them for putting themselves in such obviously deadly situations.

And when they did meet their inevitable, terrible fate, I even felt the smug satisfaction of watching the results of my unheeded warnings. Like, you got chased by a monster through the woods, and then got to a cabin where you heard things walking around outside, and then you still tried to get your swerve on? Yes. Wonderful. Capital idea.

However, they didn't necessarily have to meet that fate. It's the one big way that Until Dawn and I Know What You Did Last Summer are different: In Until Dawn, the fate of the characters are in your hands. In our demo, our duo was killed — but they could ostensibly be saved. The game has multiple endings, suggesting any combination of the eight protagonists could possibly make it to the game's titular daybreak.

That is, if you really want them to.

The Sims’ iconic Goth family gets a makeover